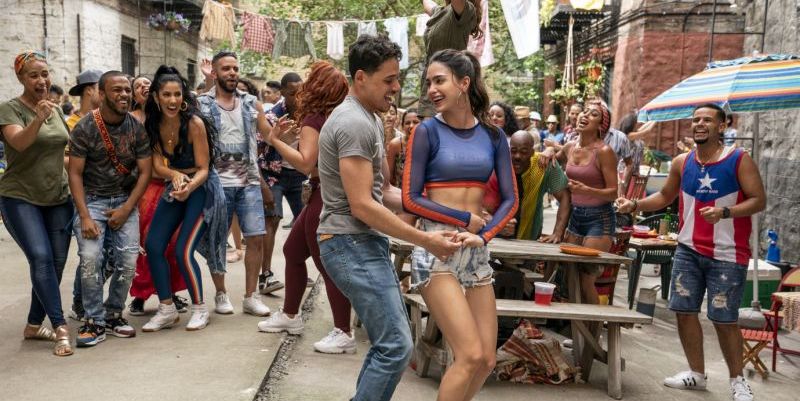 In The Heights Movie Review

In The Heights Movie Review Metadata

In The Heights Movie Poster 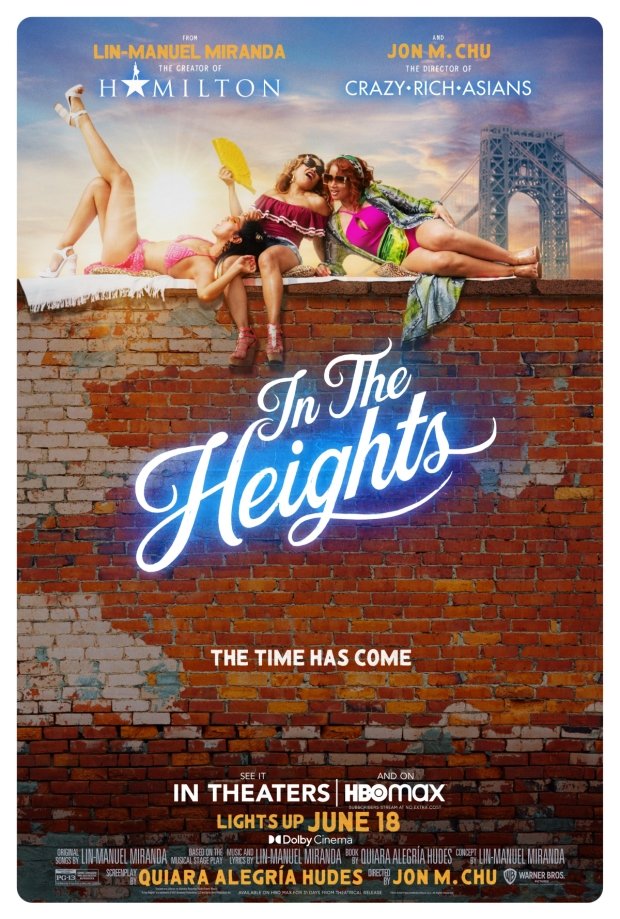 In The Heights Movie Metadata

In The Heights External Links

In The Heights Movie Trailer

In The Heights Movie Tickets

Run, don’t walk to your nearest theater to see the film adaptation of the Tony-award-winning musical In The Heights (2021) — a movie that stands as proof as to why theaters must always exist. The colors, the choreography, the music. Even non-musical fans will smile and cheer throughout.

Usnavi, when not pining for Vanessa is working day in and day out at the local bodega, trying to save up to purchase a tiny bar (appropriately named El Suenito or “Little Dream”) once owned by his father in the Dominican Republic where he was raised. Vanessa’s aspiration to get out of the barrio where she cuts hair has her mind set on becoming a fashion designer. Nina, meanwhile is one of the lucky ones who made it out, but back from Stanford, feels like she’s let the neighborhood down for not cutting it at the elite college. And then there’s Benny, Nina’s ex who works as a dispatch and yearns to win back Nina’s heart. All four performances, both singing and acting, are award-worthy. Ramos makes you forget that Miranda originated the role. Barrera dares you to take your eyes off her (you can’t and won’t). Grace has the voice of an angel and owns every scene she’s in. And Hawkins, the only non-Hispanic in the large cast, shows off an acting range that’s taken him from a younger Dr. Dre in Straight Outta Compton to his breakout role here filled with sweet vocals.

But In The Heights goes beyond these four talents, boasting a tremendous supporting cast that assist with the heart, humor, and hope exuding from this film. Jimmy Smits serves as the hope, reflecting every father willing to do whatever it takes for his child to succeed. The aforementioned Sonny, a teenager who works alongside Usnavi, lights up the screen and can always be counted on for a laugh. And Abuela Claudia (Olga Merediz, reprising her Broadway role), the north star for many of the characters, offers love and passion for her “family” that cannot be matched.

Oh, and there’s Washington Heights — serving as the centerpiece of this masterpiece. A vibrant, working class neighborhood made up of Latinos from all parts of Central America and where the streets are made of music. It’s a place where people are not powerless, but powerful, even when they see it disappearing before their eyes due to gentrification.

So who’s the ultimately responsible for all of these memorable performances? That’s the director of 2013’s , G.I. Joe: Retaliation, Jon M. Chu. Wait, what?! Yup, the same guy who directed a film about an action figure also directed this summer’s most exciting release. At first glance, the choice of Chu as the director may seem like an odd choice, but with his success directing two Step Up sequels, a Justin Bieber documentary, and then the surprise hit Crazy Rich Asians — a film also starring an underrepresented minority — he’s the perfect choice. It’s that last film that allowed Chu to fight the studio to cast four relative unknowns in the lead roles. Just as he did with Crazy Rich Asians, he perfected the choices here too.

The film’s success is shared with lyrical genius Miranda (who has a cameo as Piragua Guy). From the first note, it’s clear that this is a Lin-Manuel Miranda production. With music seemingly ripped off from Miranda’s sensation Hamilton, it’s in fact the opposite. Premiering nearly seven years before the play that would make Miranda a household name, In The Heights put Miranda on the map and based on the similarities between the two songbooks, served as the inspiration for the play about the now most popular founding father (the meter in opening number “In The Heights” is reminiscent of everything from “Helpless” to a nearly identical crescendo heard in “Alexander Hamilton”).

In The Heights’ toe-tapping, knee-slapping music is equally matched by its colorful and elaborate choreographed numbers combined with standout vocals, challenging moviegoers to not get out of their seat and applaud. Nina and Benny channel their inner Fred Astaire in the magical “When The Sun Goes Down”. “96,000” filmed at the neighborhood pool is so over the top and triumphant, it requires a second or third viewing just to take it all in.

The road to the big screen wasn’t an easy one, littered with potholes. After premiering on Broadway, the musical bounced from movie studio to movie studio — starting with Universal, making a stop at The Weinstein Company, and finally landing at Warner Bros. Not to mention a pandemic that shelved the film for a year and led the studio to simultaneously release the film in theaters and HBO Max. The duo release means In The Heights may never achieve a box office number as high as it could have with a full theatrical release, however a trajectory like The Greatest Showman feels possible — a film that defied expectations and increased box office receipts week after week due to strong word-of-mouth. Combine that with the likely support of Hispanics and Latinos, a community that accounted for nearly 1/3 of all tickets sold in 2020 despite making up only 18.5% of the US population and In The Heights may ultimately see numbers never reached by a musical adaptation before.

Even if In The Heights doesn’t break the bank at the box office, it raises the stakes for future adaptations and potentially sets the bar so high that no musical will ever elicit such joy and jubilation. That is, of course, bad news for the highly anticipated Spielberg-directed West Side Story and Dear Evan Hansen. But perhaps not for Chu — he’s currently lined up to direct the dearly beloved and highly anticipated musical Wicked.

Now stop reading, buy your tickets, and prepare to forget about the last 15 months for just a few hours. One more thing: stay alert for some fun Hamilton easter eggs and a post-credit scene!

In The Heights is streaming now on the following services:
Powered by JustWatch