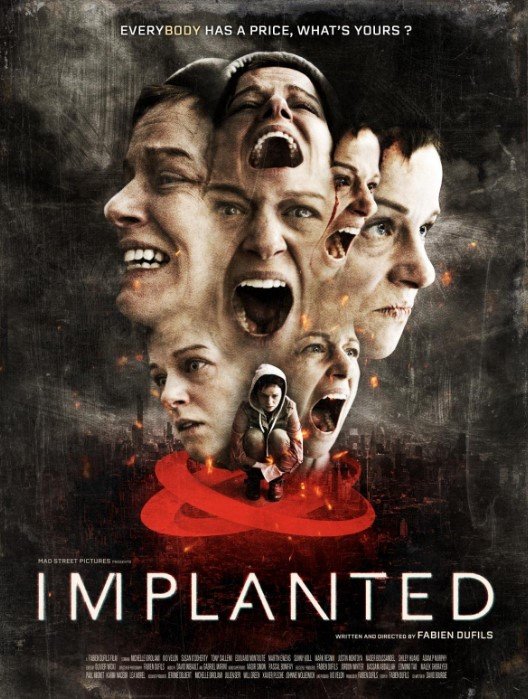 Sometimes we all need a little voice in our head pushing us to do the right thing, reminding us to breathe, and helping us to make good choices. That’s what Sarah (Michelle Girolami) wanted (in part) when she signed up as part of a pharmaceutical trial with Dynamics Health Cure for their New AI nanochip called LEXX, in Implanted (2021). With their shiny brochure and the potential to make $20,000, Sarah believed a little trial and error as a guinea pig was well worth the potential side effects. Sarah is homeless and struggling and she just needs a little help to get even. There’s her mother to consider as well, suffering from her own fast mental decline, and Sarah needs to be able to take care of her by any means.

It isn’t long before that little voice does more than nag at Sarah to calm down and breathe. Soon it literally takes over her body and forces her to do terrible things. First breaking and entering, then stealing, then murder. Sarah wanted to be free from anxiety and homelessness with a little walking around money to spare. LEXX wants to be free from everything.

Imagine if the Machine in Person of Interest (CBS, 2011 – 2016) and your BiPAP had a baby and it was surgically imbedded into your skull, and that’s pretty much where we are with Implanted. LEXX can cause pain, or flood your pleasure centers, it can cause you to stop breathing, it can trap you in your memories. With modern society’s dependence on technology from operating lights to driving cars, to watches that remind us when to eat and how to pay, this isn’t too far of a stretch. Implanted is a terrifying concept brought to life in basically a one-woman show with Michelle Girolami on screen for nearly all of it. Sarah’s anguish at wanting to do the right thing while being forced to be all sorts of evil is well-acted and there are some clever story and character twists that are refreshing surprises. Without her clear stubbornness and defiance, a nice touch in a film as simply layered as Implanted, the center would collapse in on itself into a dark dystopian nightmare of isolation and mental illness.

It’s not a perfect film. There are a lot of interesting suspensions you have to get past, like how does LEXX stay powered while implanted to the body, how is it connecting to wi-fi, and for a 93-minute movie, Implanted actually feels a little long. The set-up is solid and we get right to the action, but as the days flow, the story loses a little cohesion around the characters. Sarah’s back story and the few moments with her ailing mother aren’t enough of a foundation, and the other characters enter and leave far too quickly to be more than pushpins on a scrub-down, barely connected with strings and flashes of photos. As LEXX forces Sarah to carry out its plans, and there are a lot of steps to this plan, the end game isn’t as solid as it would seem.

Implanted’s screenplay by director by Fabian Dufils is smart and doesn’t get bogged down in the science of this science fiction, because at the heart is still humanity and what we can achieve – and what we maybe shouldn’t. It’s not unfair to say this movie is like a few others you may have seen, for example, Upgrade (2018), I Am Mother (2019), Transcendence (2014), but it’s still a worthwhile watch for that rainy afternoon.

This is a marginal recommendation, because I did enjoy a lot of it, but don’t expect greatness.

Implanted (2021) is Unrated and direct to VOD, but we’ll call it Rated R for people getting shot (like a lot), people in clear but unknown mental and physical distress, a suicide, and a bludgeoning.