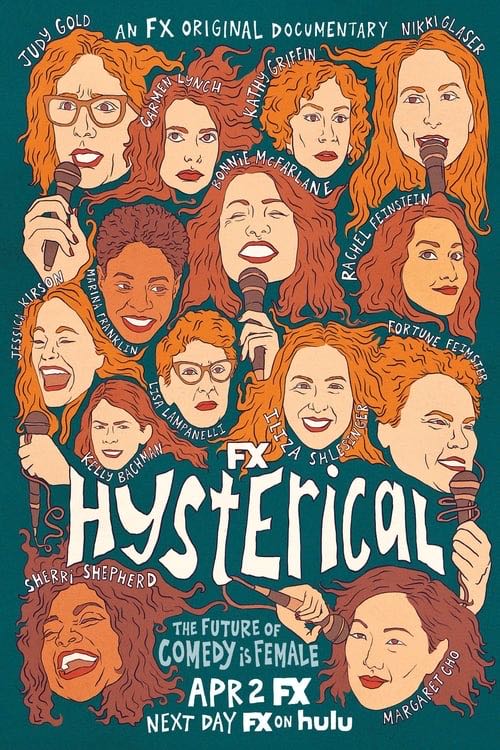 While growing up, girls are inundated with men (and women) telling them how to behave: Be nice. Smile more. Be assertive, but not too assertive, because then you’ll be called a bitch. Be confident, but not too confident, because again, you’ll be called a bitch. Hell, it only makes sense that women use comedy to overcome the misogyny they have faced for hundreds of years.

FX’s documentary Hysterical provides an inside look at the challenges and history of female comedians — from Moms Mabley in the 1920s to today’s hottest comics like Nikki Glaser and Iliza Shlesinger — why they got into comedy, the uphill battle they faced, their role models, and the road ahead that is still being paved.

Many say that great comedy comes from pain, and based on the many interviews in this documentary, that is true here. Sherri Shepherd shares how growing up and being bullied for being black; comedy was more manageable than fighting. Jessica Kirson wanted “to feel seen, heard.” Nikki Glaser grew up in the shadow of her “gorgeous sister.” And Lisa Lampanelli used humor to diffuse a mother who yelled a lot. There’s a reason they say “laughter is the best medicine.”

Like most comedians, male or female, all of the comedians featured had to pay their dues to get where they are today. Unlike their male counterparts, the women had to fight harder to get the stage time and respect they deserve. Many comedy clubs frowned upon having “two vag’s in a row,” which meant fewer opportunities to showcase their talent. African-American comedians like Sherri Shepherd had to battle “being a woman and being black.” These women have been licked, physically assaulted, and even sexually assaulted. And despite this adversity, they still made it in a competitive field and, in return, are paid far less than their male counterparts.

Hysterical pays tribute to the late Joan Rivers, who set the foundation for women comedians. Rivers’ nearly 100 appearances on The Tonight Show always left Carson laughing, something that many comics famously hoped to do so they too would be invited to sit next to him after their routine. Carson’s admiration for Rivers’ comedic talents even extended to her being his guest host when he was on vacation. It was because of comedians like Rivers, Wanda Sykes, and others that Shlesinger states, “It never occurred to me that I’m a girl and can’t get up there.”

In the end, Shlesinger sums it up best, “We all want love. We all want to feel seen. We all want to feel acknowledged. Nobody wants to feel bad about themselves. Everybody wants to be heard. Hopefully, women and power become ubiquitous; we don’t have to talk about it anymore.” When the #MeToo movement has allowed women to speak more freely (and believed) about sexual harassment, the United States elected its first woman vice president. The conversation continues about equal pay. May these continue to be a positive trend towards equality. And may the world continue to bless us with funny, intelligent, and talented comedians like those featured in this first-rate documentary.