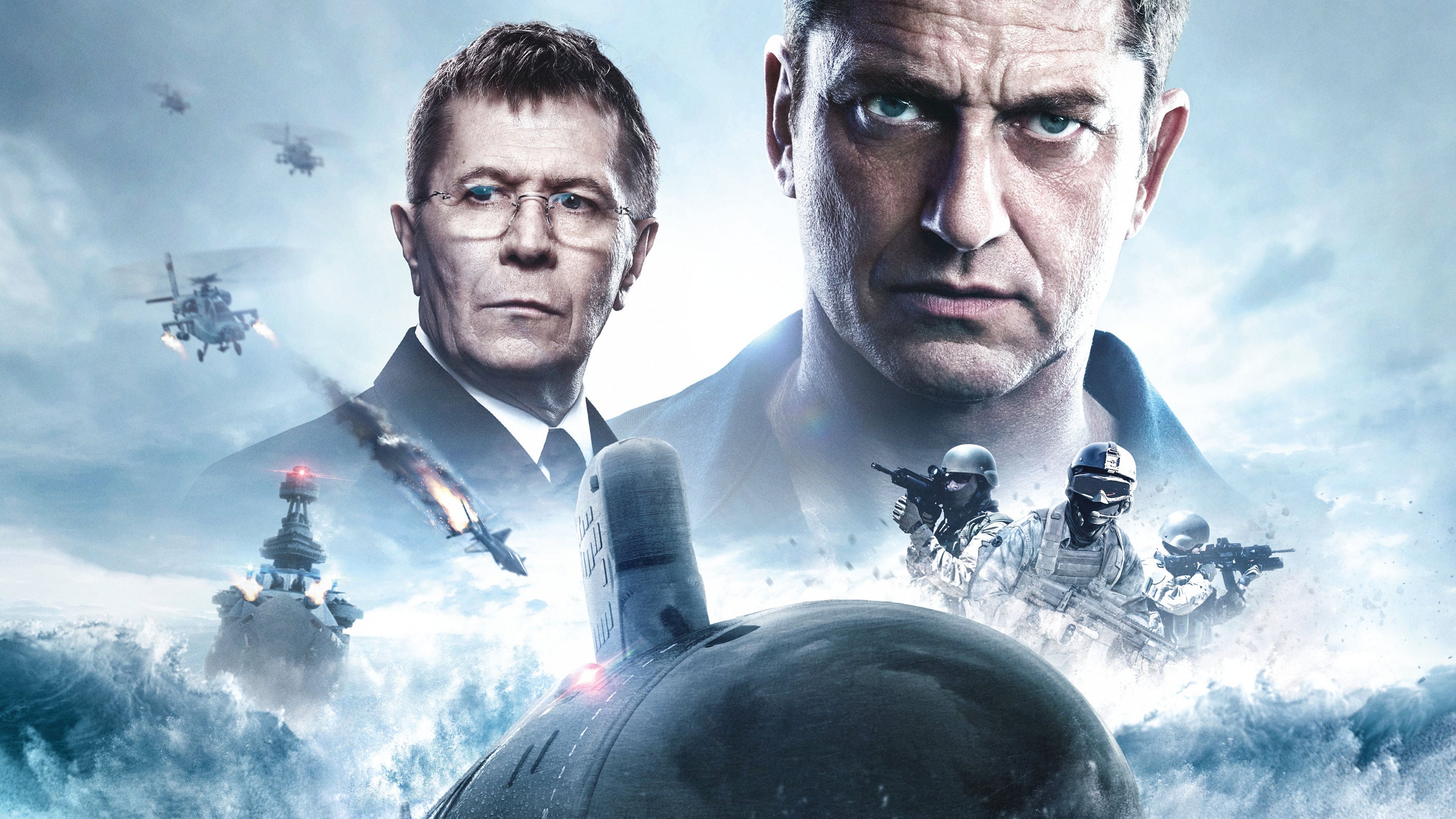 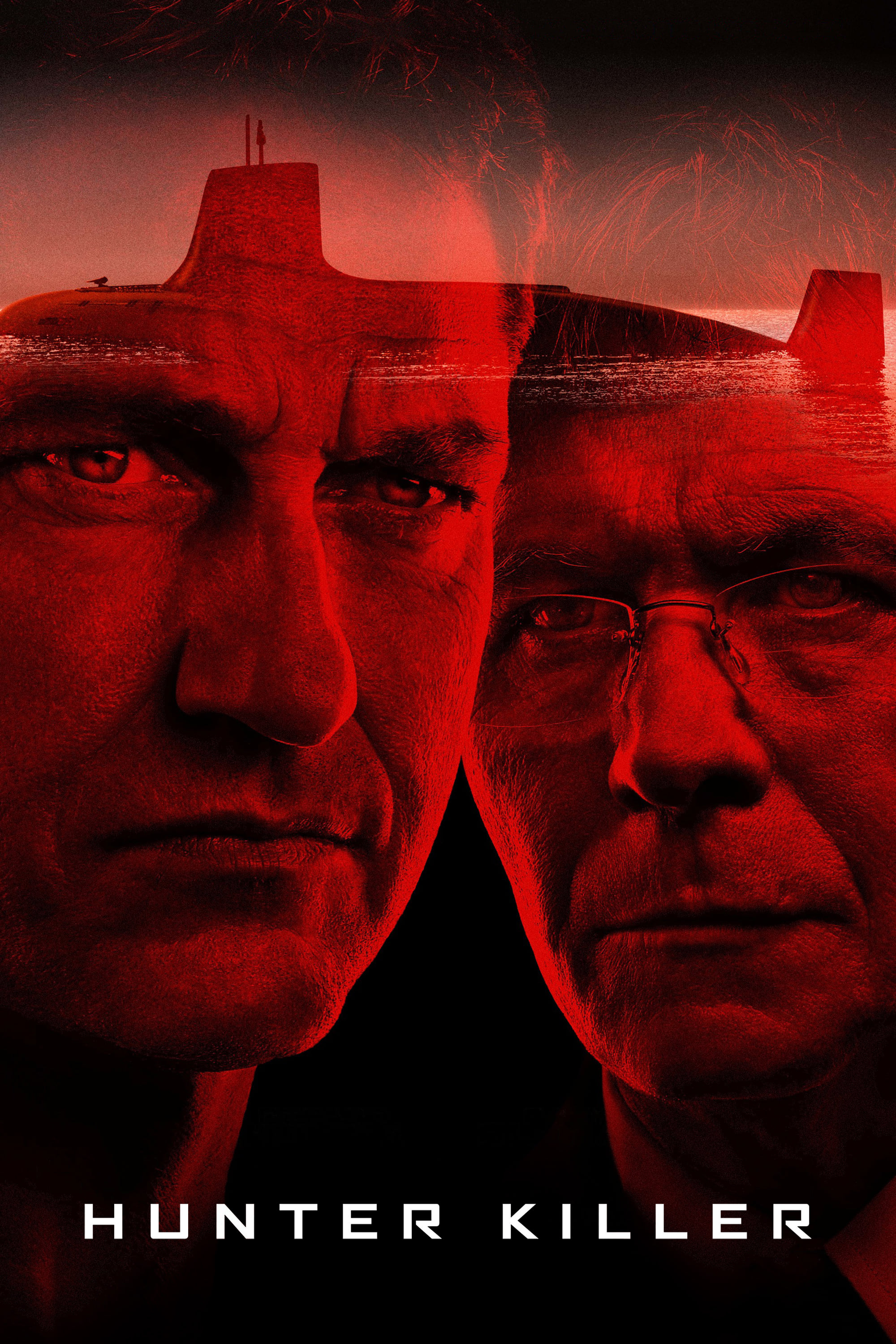 The action thriller Hunter Killer (2018) starring Gerald Butler, Common, and Michael Nyqvist is not the exciting recruiting video for the United States Navy it thinks it wanted to be. I’m married to a former Navy man, and if I gave him a chance, you’d spend the next 1,000 words learning everything wrong about this movie. “The worst,” he says when the commercial comes on.

He’s saying it now as he reads this. A wife knows.

Fortunately for you, I’m writing the review and it wasn’t that bad, but it wasn’t great either. It’s not Hunt For Red October (1990) by any stretch of the imagination, but it’s also not the vomitous dreck my better half claims.

In the Arctic Circle way too close to the Russian Border, submarines play a weird game of cat and mouse. I was never in the military and the closest I’ve come to being on a submarine was a plastic ship I got out of cereal box and filled with baking soda, so I don’t understand how ships that big can still manage to miss each other within 200 feet, but I’m no military mind. There’s an incident which leaves the equivalent of 4 nuclear reactors and hundreds of human lives on the ocean floor and Commander Joe Glass (Gerard Butler) gets to take a shot at not killing everyone on board his new ship to find out what happened. He has a semi-tragic backstory but no one cares so no one really talks about it.

Meanwhile, the US government launches its own mission in what looks a lot like espionage against a sovereign nation with Navy Seals who witness the opening strains of WWII. It’s a fine secondary story that nearly dwarf’s Glass and his ship. Perhaps in the book Hunter Killer is based on, “Firing Point” by George Wallace and Don Keith, there’s a lot more to them, but this movie was already at 121 minutes and we have things to do.

Gary Oldman plays thin Winston Churchhill masquerading as the commander of the Joint Chiefs of Staff and dog-gone it, he’s fixing to have a war! He’s practically apoplectic. Linda Cardellini (who I will always mistake for Ellen Page at first glance) is in the NSA, Common is over the Department of the Defense and there’s President Dover (Caroline Goodall) who it TOTALLY NOT HILLARY CLINTON looking very weary over having to be playground monitor *again*. We are somehow supposed to believe that we are safe from these people on a regular basis.

I am not convinced, however, I’m just here for the explosions.

I eventually get them. They are short-lived and a lot of them are in the water, which kinda doesn’t count. There is shooting, and swimming, and people in the hulls of submarines being very quiet because MINES. There are good Russians (Alexander Diachenko) and bad Russians (Michael Gor) and right about the midpoint it starts to feel like because who in their right mind wants to start a nuclear war? Nothing could be so bad in Russia as to have someone say, “you know, we could really use a good nuclear winter around here.” You’ll be amazed at how fast the US and Russian Navies have a Mexican Standoff in the middle of the Ocean for what is literally no reason.

Yes, this is exciting, but again every little thing didn’t bother me. It’s not consistent (“nobody talk, but imma scrape the side of this reef,” says Navigation), and it wasn’t sure what kind of movie it wanted to be, so it tried to be all of them. We have Maverick Americans, warmongering government officials, and bad guys in furry hats 8 steepled fingers away foreclosing on the Bailey Building and Loan. If you’re in it for the over the top drama and lots of guys in uniform (Hello, Sailor!), this is totally your movie, but maybe don’t pay full price for it.  Maybe wait for it to hit your favorite streaming platform.

Hunter Killer (2018) is Rated R for swears, potential drownings, claustrophobic spaces, people getting shot, the threat of war, and whatever was wrong with Michael Nyqvist’s eye.

Hunter Killer is streaming now on the following services:
Powered by JustWatch