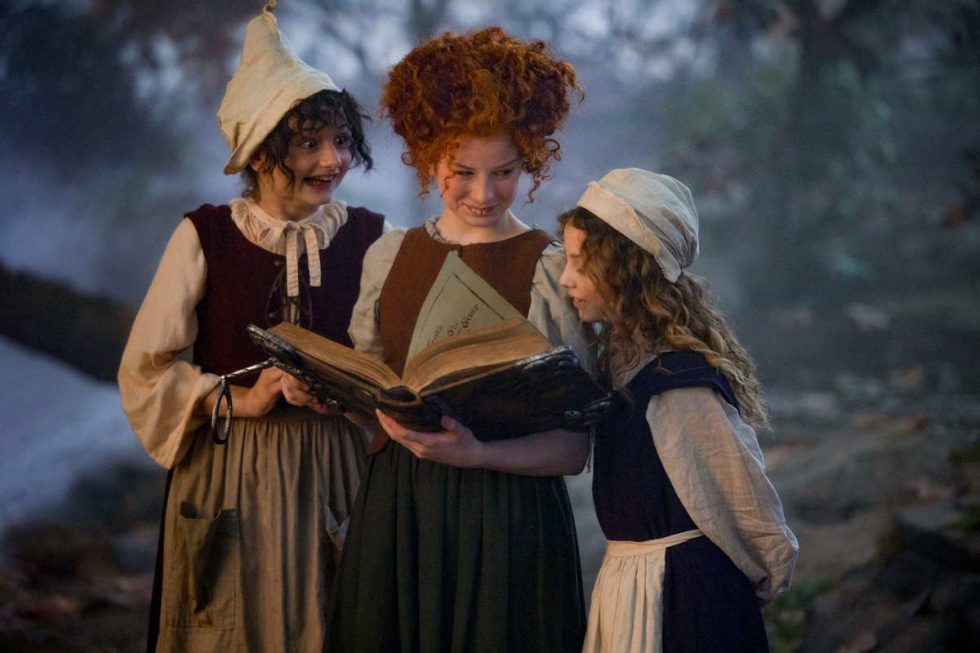 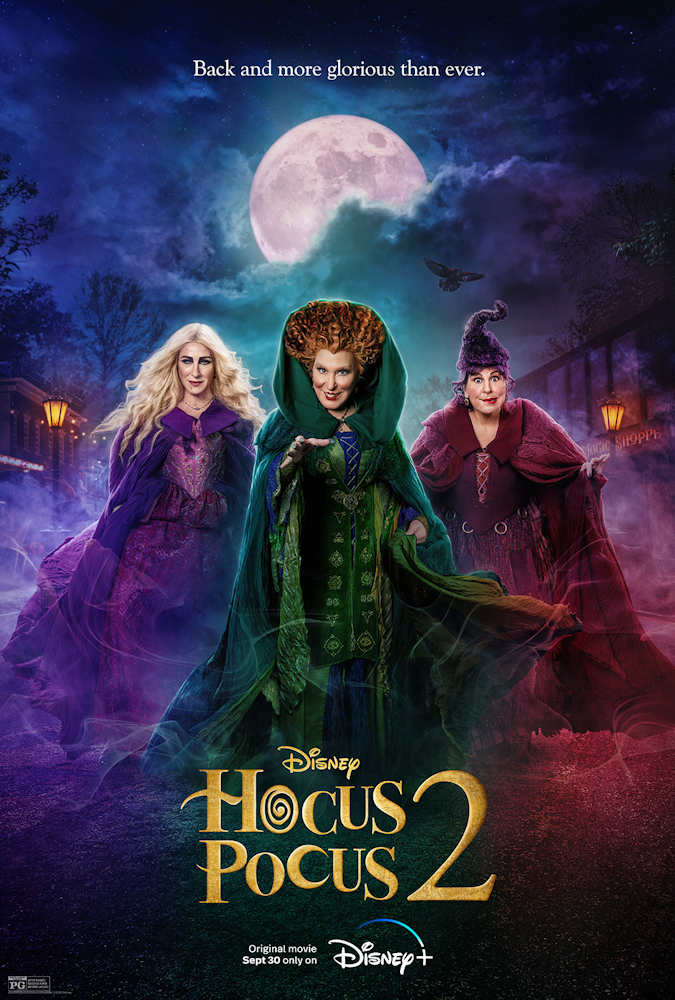 Maybe I’m not the right audience for Hocus Pocus 2 (2022). I was in my 20s when the original came out, but I only watched it for the first time maybe a few years ago, just to see what the fuss was about. I’ll confess, I wasn’t impressed.

While I’m already on my knees, I’ll confess further – I wasn’t impressed with the sequel either.

It’s 29 years after the events of the original Hocus Pocus (1993), and baby witches, Becca (Whitney Peak) and (Belissa Escobedo), frozen out by a former best friend, Cassie (Lilia Buckingham), complete an annual ritual on Halloween night and accidentally summon the Sanderson Sisters (again). But they’re dead, you say. It’s Disney, honey, and nothing ever dies (except Mufasa and Bambi’s mom). With new information gleaned from opening flashbacks, the Sanderson Sisters, Winifred (Bette Midler), Mary (Kathy Najimy) and Sarah (Sarah Jessica Parker) now have a beef with an old nemesis, who due to the power of Disney Genetics™, looks exactly like the modern-day mayor (Tony Hale). The ultimate goal for the Sisters is to complete the spell of ultimate magic to become the most powerful witches and live forever, but not if Becca and Izzy have anything to say about it.

Back in the mix is Billy Butcherson (Doug Jones), but not returning are any of the kids from the original, Max Dennison (Omri Katz), Alisson (Vinessa Shaw), or Dani Dennison (Thora Birch). You don’t even get the immortal black cat, Thackery Binx. There is a black cat, Cobweb, but she doesn’t talk.

I’m not saying Hocus Pocus 2 isn’t cute. It’s very colorful and Disney-scary, and the sets and costumes were top-notch as usual. These teenagers are smarter than the last bunch, using actual wit to outmaneuver 300-year-old witches. But they’re trapped in a weird double standard. Disney wants their young protagonists to be intelligent but painfully immature, independent but craving attention, and smart but fatally absent-minded – and there isn’t enough character development among any of them to pull that off.

Harder to swallow were the musical numbers, and there were two of them. When you hear them, you’ll understand.

Hocus Pocus 2 is not a terrible movie, but it is banking hard on the nostalgia equity built up from the original, and it can’t even cover the interest. We start with young sassy Winifred (Taylor Henderson) and her sisters (Nina Kitchen, Juju Journey Brener) causing problems in Salem Village by refusing an arranged marriage, then a time-jump to The Curse and their original demise. It’s strong with the Grrl Power, but for something that should seem pivotal, it’s abandoned and forgotten in favor of the established canon.  The Sanderson Sisters weren’t hanged because they didn’t want to be in arranged marriages, they were hanged for eating children, and well, practicing witchcraft. Hocus Pocus 2 has a lot of mixed or convoluted messages sprinkled throughout as if no one could settle on a cohesive story that everyone was comfortable with, so we get several headscratchers to ponder. If you want to be friends forever, you need to stick together after ratting them out to their parents. Feel free to go your own way as you grow up, but your best girlfriends will never let you forget how you abandoned them. Honesty is the best policy unless you need to lie to get what you want.

Yet, the biggest issue with Hocus Pocus 2 is while it’s still geared towards tweens and high schoolers of the 1990s, Disney forgot they grew up. They’re Gilbert’s (Sam Richardson) age now and he runs a whole magic/occult shop. The original audience are now full adults who might have liked to see adults (and maybe their kids) dealing with the Sanderson Sisters 30 years later. Instead of a sequel, Millennials could reconnect with, Hocus Pocus 2 is aimed squarely at Gen Z, who weren’t even born when the original movie premiered, and skipping the adults who have clamored for this movie for a generation.

What’s it like being ignored, Gen Y? You aged out of Disney. Sucks hard candy apples, doesn’t it?

Hocus Pocus 2 will no doubt be just fine with fans who are, on some level, willing to ignore a lot of chuckholes, pitfalls, and missed exits, so good for them. Someone deserves to find happiness in this mixed bag of spells.

Hocus Pocus 2 (2022) is rated PG because it’s Disney. You may find the songs as objectionable as I did, but I don’t think that’s what the MPAA had in mind.

Hocus Pocus 2 is streaming now on the following services:
Powered by JustWatch