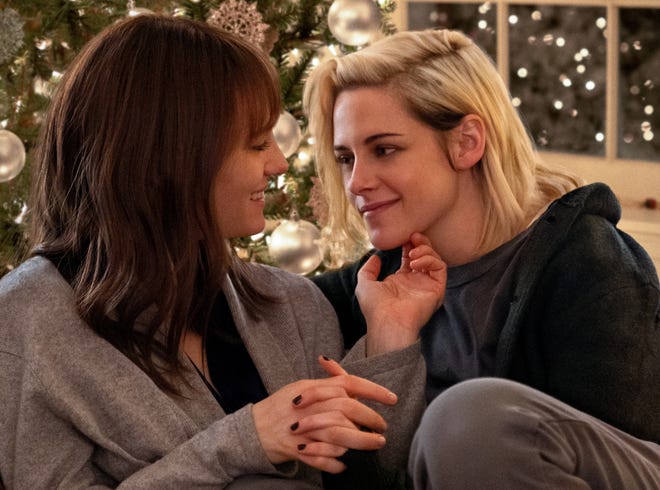 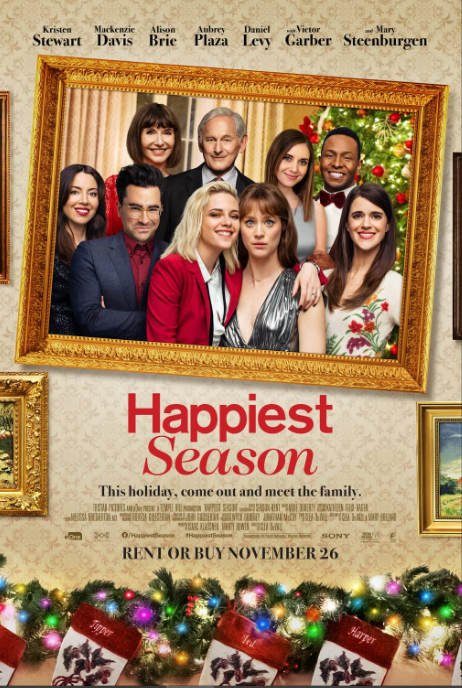 Quick, name your favorite lesbian holiday rom-com! Wait, what? You can’t come up with one?! Well good news for you, after streaming Hulu’s Happiest Season, you will have watched the first movie in this genre and enjoyed one of the most entertaining holiday romantic comedies in years.

Just days before Christmas and high on the joys of season, Harper (Mackenzie Davis) asks her bah humbug girlfriend Abby (Kristen Stewart) to celebrate the holiday with her family. Seeing this as an opportunity to win over Harper’s parents and then ask Harper’s father for her hand in marriage, Abby reluctantly agrees but quickly comes to regret that decision. Not only has Harper not come out to her parents, but Abby is going to have to go back into the closet during their visit and play the role of Harper’s straight orphaned roommate.

Abby’s plan only gets more complicated after meeting Harper’s uptight parents, Ted (Victor Garber) and Tipper (Mary Steenburgen) — two people who are more focused on appearances than they are about anything else. That combined with Ted’s political ambitions and his conservative values that find him criticizing a friend’s gay child as being “such a shame” for “that lifestyle choice,” has Abby realizing that she is in over her head.

Nothing is going to get in the way of Ted, a city councilman now running for Mayor, and his wife who have spent a lifetime building the perfect family with each child filling a particular role: Harper, the “perfect child”; Sloane (Alison Brie), the “super mom”, and Jane (Mary Holland) is, well, “the only reason the internet ever works in (their) house.” The two seemingly love their children only for what they can do for them. Their open criticism of Harper and Sloane has led to a lifetime of fierce competition and their disregard for Jane has left her with a childlike innocence. And with each child wanting to maintain their parent’s love, each has been forced to keep secrets. As it always does around holiday time, chaos ensues.

Happiest Season includes a star-studded supporting cast led by Dan Levy as Abby’s best friend, John. Playing the role with equal heart, humor, and humanity, Levy hilariously serves as the voice of reason and proves why he was deserving of an Emmy Award for his performance of David Rose on Schitt’s Creek. The Academy would be wise to consider him for a supporting actor role here, as well. Aubrey Plaza playing Harper’s ex-girlfriend also stands out in a muted performance, a nice change of pace from the awkward characters she has been typecast to play in recent years. Brie’s flawless execution of Harper’s uptight and jealous sister also deserves a shout out for her convincing role.

The film offers a new approach with its ‘coming out’ story, but at its core, it’s all about love and family. You’ll laugh, you’ll cry, you’ll walk away with a deeper appreciation of all who were involved with the movie. Make this holiday a merry one with Happiest Season.

Happiest Season is streaming now on the following services:
Powered by JustWatch