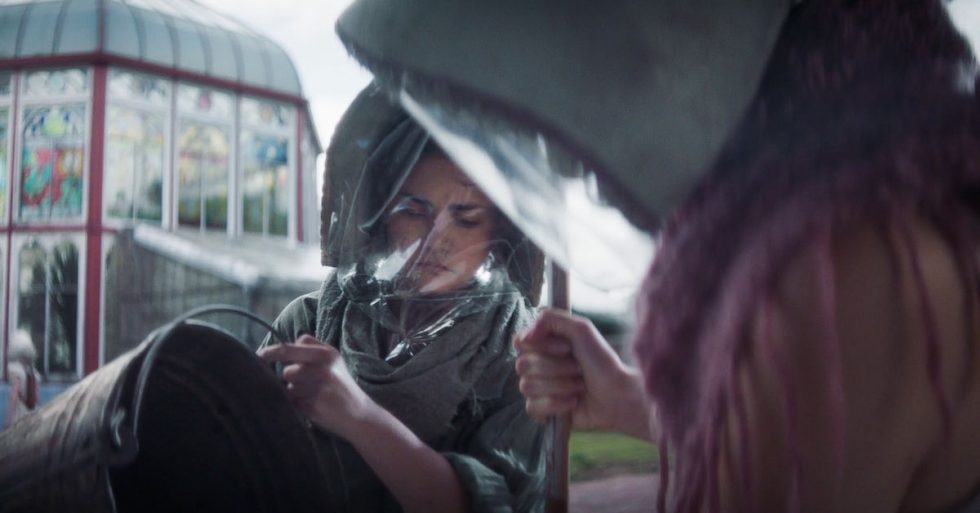 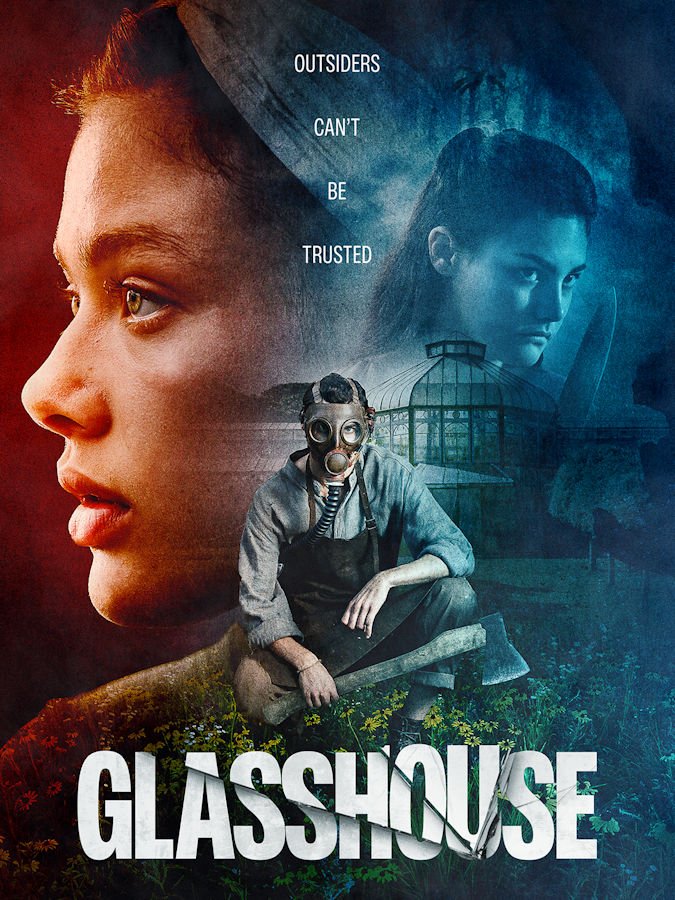 This was once a man but he was washed away from himself. He forgot and became forgotten.

In Kelsey Egan’s Glasshouse (2021) the Shred, an airborne virus, causes slow crippling dementia and a catatonic forgetfulness. A small family keeps constant vigil in a large glass house and guards against wandering strangers. They live their days in solitude and strange homespun rituals. Nothing goes to waste, not even the trespassers they murder. Hair is used to hand-pollinate their gardens and the cartilage is cooked down to make glue to seal the windows. The methods aren’t wholly scientific, keeping the Shred from their sanctuary, but for their intimate purposes of survival, they manage. Four women and a man– Mother (Adrienne Pearce), Evie (Anja Taljaard), Bee (Jessica Alexander), Daisy (Kitty Harris), and Gabe (Brent Vermeulen) scrape together a purposeful existence. Gabe is slowly succumbing to the Shred, the result of a horrible mistake, but the family protects him, even as he loses words and memories and control of his temper.

A stranger (Hilton Pelser) comes to the Glasshouse and disrupts the tidy order of things. Mother holds the household together with rituals. Bea is taken completely by the stranger, Evie and Gabe don’t trust him, and Daisy is slightly unhinged. The stranger makes them confront old memories and raw feelings. Little by little, the Glasshouse loses it safe individuality as the stranger breaks down the secrets and flays open the quiet lies.

There is very little about Glasshouse that can’t be enjoyed. Its methodical pacing, its airy history, the setting that is both modern (a magazine cover that mentions SARS and COVID) and antiquated (the Edwardian clothes and facemasks). Writer Emma Lungiswa De Wedt, a South African children’s writer captures the innocent and otherworldly disconnect that is living on the edge of sanctuary and oblivion. For what it’s worth, the in-universe science is loose, but for 97 minutes in this dystopian utopia, it feels like an innocent misstep. The air is poisonous, but not beyond their plastic sheeting and solarium, they grow what they need and cook what they kill and it all feels very civilized for a nightmare.

Standout performances from Kitty Harris who navigates Daisy’s world with childlike wonder and enthusiasm, whether it’s freshening her No Trespassing signs or hanging dismembered limbs as a warning to others. Nothing about her character is cloying or precious. Anja Taljaard treats every task Evie faces with the put-upon determination of the sensitive middle child. Mother and Evie bear the weight of remembering their own past and the pasts of everyone under their protection. Bee the oldest and Daisy the youngest are allowed to live day to day with little responsibility. It’s a lot to take in at the end of the world.

Glasshouse feels like the Newberry Award-winning books we read as children, like “Bridge to Terabithia” (1977) or the “Chronicles of Narnia” (1950) and the heavy tones of grief and loss are muted behind sepia tones and airy clothing, and the language is kept light, if old-fashioned. There is little need for long soliloquies because not even the characters have enough words to convey all of their feelings. They live out their days in desperate normalcy, passing the torch to those they hope will remember.

Glasshouse (2021) is unrated, and there certainly aren’t any swears to mention, but call it an R for sexytimes, people getting shot in the head, a festering leg wound, dismemberments, human bones, and tea parties with corpses.

Glasshouse is streaming now on the following services:
Powered by JustWatch