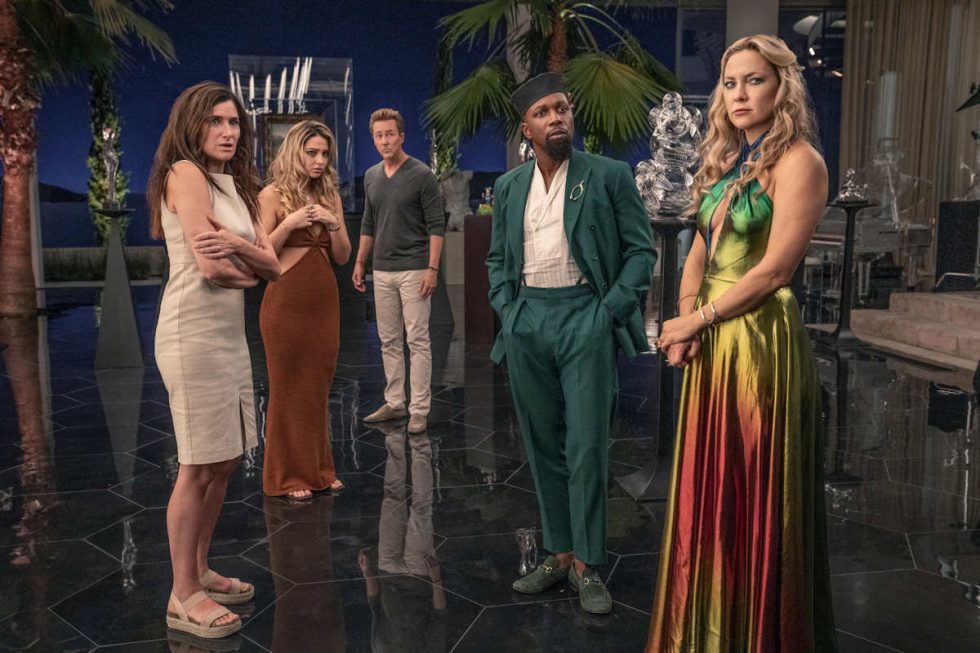 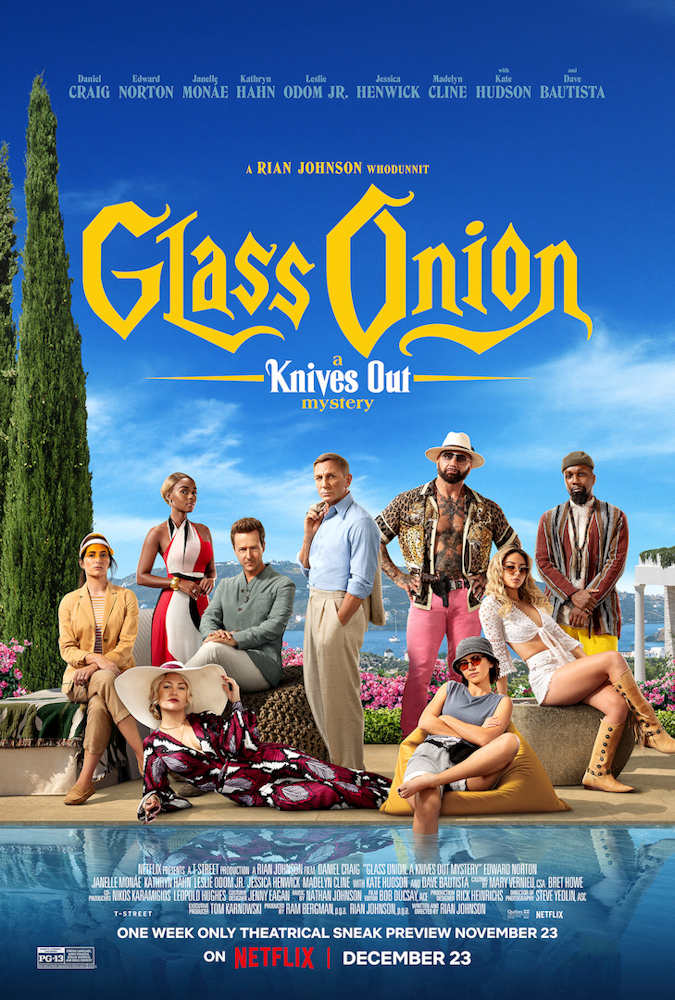 Glass Onion: A Knives Out Mystery

I was on the fence about 2019’s Knives Out, a film about a despicable ruthless family all on the hook for the patriarch’s murder, especially when he leaves his entire fortune to the help. It was up to Benoit Blanc (Daniel Craig) a southern Sherlock Holmes archetype if written by Angela Lansbury to solve the case. While enjoyable enough, the Benoit Blanc character wasn’t as fully realized as I thought he could have been. I felt he came off a bit like an accidental genius, solving the crime by mostly dumb luck instead of innate observational skills.

Glass Onion (2022) disabused me of that notion. It’s rare that a sequel surpasses the original, but in this case, if you haven’t seen Knives Out, you may be better off. Glass Onion is not your typical murder mystery. In fact, it’s a lot more fun.

Miles Bron (Edward Norton) is the typical showy billionaire type. He owns a private island and has his cars flown everywhere. He got to his station in life by cheating those closest to him out of more billions. Every year. he gathers the Disrupters, his favorite people who came up together finding fame and Miles’ fortune to their liking, for a long weekend of mystery, intrigue, and embarrassingly lavish extravagance. Everyone receives a puzzle box, and once that’s solved, they are provided an invitation to travel (despite the Covid Pandemic lockdown). Invited guests are Duke (Dave Bautista) the men’s rights activist who’s about to go global with his channel, Claire Debella (Katheryn Hahn) who’s gone from soccer mom with a cause to governor, Birdy (Kate Hudson) an influencer whose brains fall from her mouth requiring multiple news cycles to recover from, and Lionel Toussant (Leslie Odem Jr), Miles’ trusted head of R&D for his multi-disciplined company and has the smarts to make nearly anything happen. Surprising everyone with her presence is Andi Brand (Janelle Monae), Miles’ one-time partner who has a secret so devastating, someone will kill to keep it quiet.

And Benoit Blanc, who absolutely no one expected, but he has a murder to solve none-the-less.

You’d think that would be enough, but it’s not. Everyone is shifty with something to hide, and so many duplicitous agendas that you may need a scorecard and a slide rule to keep track of them all. By all means, try to figure this one out as you go, because that’s part of the fun, especially when writer-director Rian Johnson pitches logical curveballs that add layers to the story.

Glass Onion is ridiculously clever, a moveable puzzle box that skewers the super-wealthy and the company they keep. Daniel Craig is given something to work with, as we can now understand the infernal engine that drives his genius when we’re allowed to see the pieces come together. Janelle Monae is both soft and brittle as the jilted partner, Kate Hudson manages to make vapid look like an art form, and Edward Norton brilliantly melds Richard Branson and Elon Musk into the perfect billionaire archetype we would love to kick down an elevator shaft. The cast works well together to bring what could easily crash and burn as an over-the-top mystery into a sassy satirical send-up of the old adage, keep your friends close and your enemies closer.

Expect cameos by Angela Lansbury, Kareem Abdul-Jabbar, Ethan Hawke, and Hugh Grant, because why not. When the third act gels you’ll say to yourself, of course, Stephen Sondheim and Serena Williams are in this. It would be weird if they weren’t.

Glass Onion: A Knives Out Mystery is Rated PG-13 for swears, people getting shot, poisoned, and mentions of suicide. Other than that, there’s nothing more objectionable than putting hot sauce in the eyes, and Kate Hudson’s teeny tiny bathing suit.

Glass Onion: A Knives Out Mystery is in theaters for one week only beginning November 23, 2022, and then will be available on Netflix December 23, 2022.

Glass Onion: A Knives Out Mystery is streaming now on the following services:
Powered by JustWatch