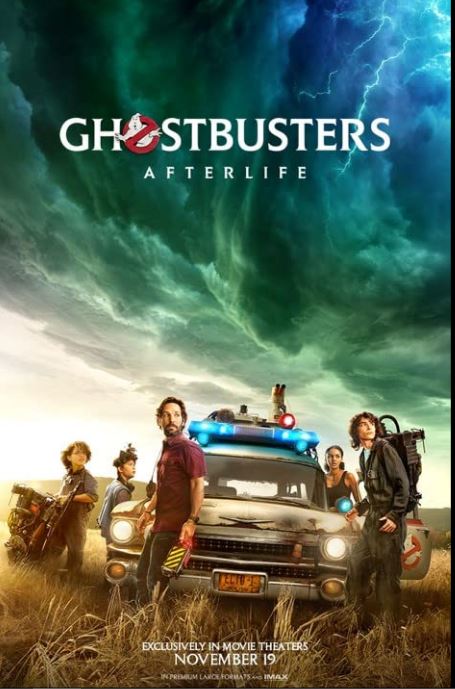 In the wonderfully nostalgic, Ghostbusters: Afterlife (2021), Callie (Carrier Coon) desperate for money discovers her estranged father, known locally in his adopted town of Summerville, OK as the Dirt Farmer, has died and left her a run-down farm and a lot of debt. With very few options, she packs up her kids for a semi-permanent stay hoping to salvage something from his house and her lost time with him.

Her kids, Phoebe (Mckenna Grace) and Trevor (Finn Wolfhard) uprooted from their suburban lives, try to make the best of a terrible situation. Trevor tries mixing with the locals at a burger joint hoping to score with Lucky (Celeste O’Connor) and Phoebe makes friends with a budding influencer, Podcast (Logan Kim), and in their own way find themselves exploring not only their grandfather’s belongings but the abandoned mines that once made the town prosperous.

Paul Rudd plays Gary Grooberson, Phoebe’s summer school teacher and a potential distraction for Callie spends his time studying the daily earthquakes that plague Summerville. Since the kids don’t want to learn and he isn’t big on teaching he lets the kids entertain themselves with 80’s horror films like Cujo (1983) and Child’s Play (1988) from the school library’s VHS collection. This isn’t a nostalgic nod so much as a whack across the head.

In time, everyone discovers the Dirt Farmer’s Secret, but it may be too late to not only save Summerville but all of humanity.

Yeah, that does sound a little dramatic.

Ghostbusters Afterlife can be considered a direct sequel to the original Ghostbusters (1984). There is a thin patina of nostalgia painted over every frame, in what feels like a pull to simpler times. Some of us were the same age as Phoebe (I was 12 in 1984), so we’re seeing her experience this weird magic through the eyes and equipment of her grandfather for the first time. I’m not gonna lie, it wasn’t that hard to slip back into that world of wonder. Shifting the main location out of a cold bustling metropolis colored by blues and grays to a rural town whose best days are behind it painted in greens and warm browns is a visual step back drawing that generational line in the sand. Summerville, OK is a city that doesn’t know it’s dead but is acting as a nexus of new beginnings for Callie and her family, or for whatever waits at the bottom of the mines.

Callie, Phoebe, and Trevor feel like real people taken far from their comfort zones to experience and in a few instances survive this new life. Having skilled actors not hamming it in front of the camera in a sequel to a movie that’s nearly 40 years old is a nice change of pace.

Some might point out that the movie is slow to get rolling but that’s okay. There aren’t wasted characters and when the layers are peeled back, everyone has a place and a role to play. Once the movie kicks into 3rd, there’s no slowing down. Heavy exposition isn’t necessary. We don’t need a backstory and if we’re being honest for the first third of the movie, not a single throwback name is mentioned. Sure there’s a fully expected reveal and in my opinion, it’s worth the wait. While this is easily an all-ages movie, even with the scary parts, Ghostbusters: Afterlife is solid Gen-X fanservice.

The music by composer Ron Simonson has a distinct John Williams-esque kick, tapping that nostalgic vein a little deeper. Ghostbusters: Afterlife is clever and not just kid clever, but funny clever as every character is self-aware of their own faults and missteps. Plenty of good-natured chuckles that don’t punch down and discoveries and adventures don’t feel forced or shoe-horned in. Everyone is left to their own devices to uncover their private mysteries organically. Movies like this are fun to watch when you don’t feel deliberately led, and we aren’t going anywhere we haven’t already been.

Ghostbusters: Afterlife may feel very familiar in parts, but I think that was the point. We’re going back to the beginning, by picking up where we left off. That’s perfectly fine. It’s an homage, and a eulogy and a thank you, and it’s okay to see some old friends one more time.

Ghostbusters: Afterlife is streaming now on the following services:
Powered by JustWatch