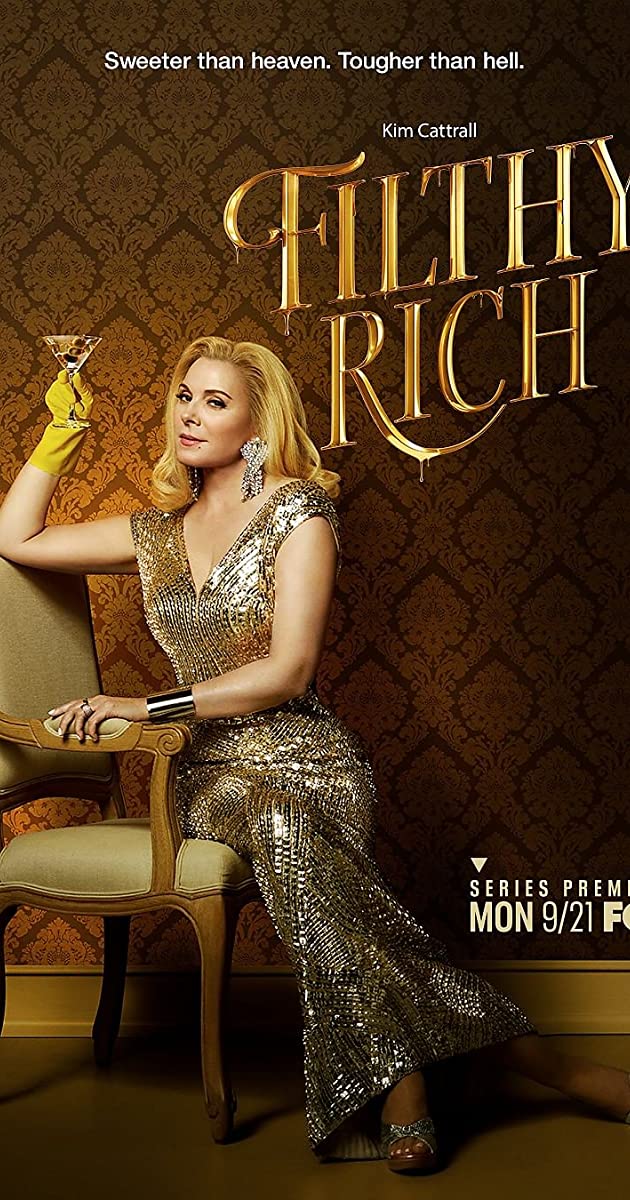 Greed. Lies. Betrayal. These three key ingredients made primetime soap operas like Dynasty, Melrose Place, and more recently, Desperate Housewives must-see TV. So it’s only natural that Fox would try and recapture some of that magic with its Southern family drama Filthy Rich. Heck, it’s Fox, so they even throw in some incest!

Following the Monreaux family — Eugene (Gerald McRaney), Margaret (Kim Catrall) and their two children Eric (Corey Cott) and Rose (Aubrey Dollar) — Filthy Rich takes a page from the Emmy-award winning Succession, focusing on a family and their attempts to retain control of their empire, conservative Christian TV network, The Sunshine Network, after Eugene’s sudden death in a plane crash.

Mourning the loss of her beloved husband, Margaret discovers that not only did her philandering husband perish with two much younger women, but during his marriage, he also impregnated three different women. Enter Eugene’s children, Antonio (Benjamin Levy Aguilar), Ginger (Melia Kreiling), and Jason (Mark L. Young) — three less affluent and successful heirs but all potential threats to the Monreaux empire. Yet it’s not only the newly acquired family members that matriarch Margaret has to worry about, she also has to contend with her network rising star colleague, Reverend Paul (Aaron Lazar), who has his own motives for taking control. There is also an evolving mystery around Eugene’s fateful flight being investigated by a curious reporter, but through the first three episodes, that storyline becomes less interesting by the minute.

Filthy Rich briefly shows sign of life with the opening scene of Margaret, dressed to the nines, gingerly walking out of a burning house. Ultimately, but quickly falls flat after those first few minutes.

Whereas series like Dynasty and Dallas thrived because of delicious dialogue, throw-down fights, and rabid rivalries (think Krystle and Alexis), Filthy Rich not only misses these important components of any good soap opera, but it lacks any real chemistry, the acting is mediocre (at best), and despite choosing to have the series based in New Orleans, Fox fails to capitalize on the good and evil of the city. Choosing a religious network as a backdrop also seems like an odd choice with religion being a hot-button topic that can easily alienate a large segment of viewers. The last thing that network TV needs is more viewers making an exodus to cable TV and the streamers.

On the positive side, Filthy Rich could be the next best drinking game requiring viewers to drink every time Kim Cattrall loses her southern accent. Perhaps getting drunk is what we all need to get through this series…and the pandemic.