Fighting With My Family Movie Review

Fighting With My Family Movie Poster 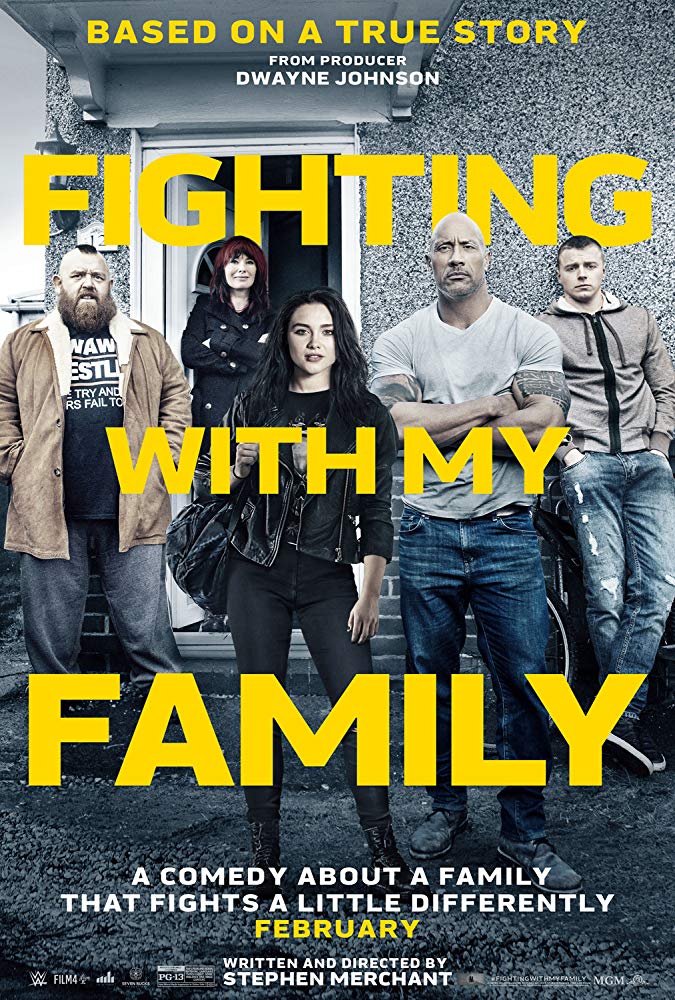 Fighting With My Family Movie Metadata

Fighting With My Family

Fighting With My Family External Links

Fighting With My Family Movie Trailer

Fighting With My Family Movie Tickets

“It doesn’t matter what you think!” – Dwayne “The Rock” Johnson

That’s what I’d tell anyone who hates on this hugely entertaining comedy about real-life (WWE Superstar) Saraya “Paige” Knight’s journey to wrestling’s biggest stage. As any fan of professional wrestling will tell you, “It’s not fake. It’s fixed.” Writer and director Stephen Merchant (co-creator, The Office) transforms her story into a carefully choreographed match of big dreams, perseverance, and defying expectations.
Saraya (Florence Pugh) grew-up in a professional wrestling-loving family. Her mother Julia (Lena Headey) and father Ricky (Nick Frost) were both popular wrestlers from Norwich, where they created the World Association of Wrestling and raised their three kids in the business.

Paige and her brother Zak (Jack Lowden) both earn a tryout for the WWE, but only Paige makes the cut. Leaving her family behind, Paige moves to the U.S. to join WWE’s developmental league, the NXT. Paige is an outcast, a mere shadow to the beautiful and athletic models we’ve always assumed dominate the WWE roster. Her traditional wrestling upbringing is dismissed by her coach Hutch (Vince Vaughn), and because of her own biases, she’s rejected by her teammates. She needs her big brother Zak.

Zak is grappling with not making the cut and he blames Paige for stealing his dream. He’s got a new baby. He turns to alcohol and brawling, which we learn derailed the Knight’s oldest son when he failed at wrestling superstardom and sent him to jail. Paige breaks from NXT to return home to confront her dismissive brother and disappoint her parents with news she plans to quit WWE.

Fighting with her family is just the motivation Paige needs to return to the U.S. and finish what she started. Embracing her personal sense of style and sharing her knowledge with her teammates catapults Paige to the biggest match of her career: a chance at the Diva’s strap on WWE Monday Night Raw.

It’s easy to dismiss Fighting With My Family as a low-rent parody of Rocky. Yes, it sometimes feels like made-for-TV fare. Yes, boxing is more respected (is it though?) than professional wrestling. Yes, it follows the Rocky formula. But there are a couple reasons (plus a bonus) I’d recommend this film.

Stephen Merchant’s script isn’t breaking any new ground, but it is full of wit and humor. If you’re not chuckling, you’re laughing out loud. His casting of Frost and Headey is perfection, and their chemistry together nearly steals any scene if it weren’t for Pugh.

Admittedly, I returned to watching WWE when I was invited to cover one of the company’s many pay-per-view events as a “dad blogger.” This happened right about the time Paige stripped AJ Lee of her long-reigning title – exactly how it plays out in the movie. Having followed Paige from champ to her career-ending injury, I was particularly impressed with Pugh’s portrayal of the wrestler’s quiet confidence, unconventional look and commanding in-ring presence. Hats off to Pugh.

I promised a bonus reason. The Rock.

Ultimately though, Merchant’s film shows us that the world of professional wrestling, or sports entertainment, isn’t all fake fighting and personas. Wrestler’s are real athletes with big dreams, and they’re laying everything on the line for the sport they love. Not unlike WWE, Fighting With My Family doesn’t take itself too seriously, providing potential viewers an approachable window to this larger-than-life business.

Fighting With My Family is streaming now on the following services:
Powered by JustWatch