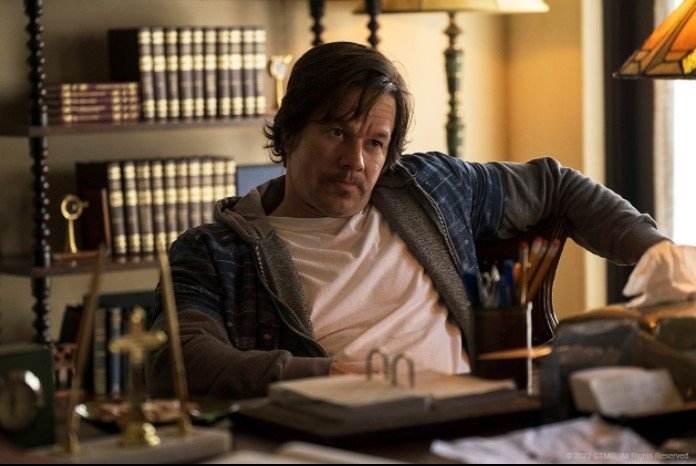 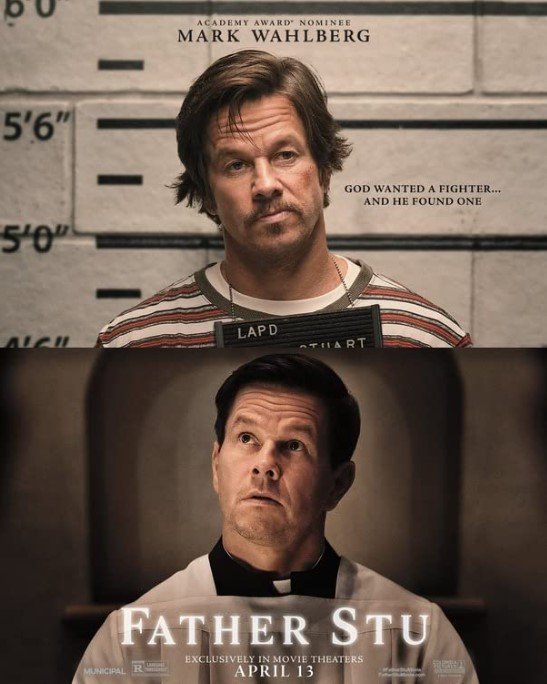 The elevator pitch of Father Stu (2022) is stated simply: “A boxer has a motorcycle accident that brings him closer to God.” which is a cheat. Father Stu is more layered than that and so obnoxiously charming, that you almost forgive its heavy-handed, if uplifting, message. Maybe your well of forgiveness is deeper than mine.

Stuart Long (Mark Wahlberg) is a small-time boxer with big dreams of fame and fortune. While successful enough to avoid living on the street, he’s still arrested a lot, and he’s a drunk like his estranged father (Mel Gibson). Stu is portrayed as a regular guy, raised in an atheist home trying to carve out something for himself. He loves his mom, misses his dead little brother (something that is barely mentioned for something so impactful) and he sees life as something to be conquered and enjoyed. After being told boxing will eventually kill him, he decides he has higher aspirations of Hollywood fame and fortune. While waiting for his big break, he sees the girl of his dreams (Teresa Ruiz) across the meat counter at the market where he works and decides she is truly his life’s goal. He chases Carmen so far as converting to Catholicism, but after a near-fatal car crash, his new life’s passion is becoming a priest.

Stu comes across as a very determined, but very rudderless character, jumping from one dream to the next, and you get the impression it’s supposed to be a little deeper than that. I say supposed to be because the movie spends a huge chunk of time charting everyday made-for-tv movie life. There’s a lot of missing data in Father Stu that we’re just supposed to fill in with “see how easy it is?” Just go to Hollywood. Just convert to Catholicism. Just relearn to walk. We also never really see the consequences of his actions – assaulting a casting director, nearly assaulting his dad, recovering from a motorcycle accident he caused while drunk, deflowering his very devout Catholic girlfriend and immediately deciding the join the priesthood.

The message seems to be “In the End, Stu became a priest, and everybody clapped.”

It should be more than that, but by the time we get to the meat and potatoes of Father Stu, it’s nearly over. The third act highlights his struggles with everything from his illness to his crisis of faith, except all we’re given as markers of his successes come in the form of occasional crutches (ableist) and a 15-second talk to some prisoners about fitting in or finding God, or something (condescending). After that, the movie becomes a race between Mel Gibson and Mark Wahlberg to see who can give the most meaningful glances and motivational poster quotes. We’re supposed to connect with his rough and tumble salt-of-the-earth demeanor, but the only growth we’re treated to is the loss of that ridiculous mustache and soul patch. It seems the movie is set in the 70s but it’s supposed to be the 90s, but no one told Wardrobe or Set Design.

Father Stu is loosely based on the real-life story of Fr. Stuart Long, an educated boxer who found God before early onset inclusion body myositis found him. Events in the movie are aggressively compressed, largely glossed over or completely ignored, like having a college degree, working nearly a decade in a museum, and teaching Catholic school. Perhaps it’s more dramatic for a beat about the head drunk to find God while stalking potential girlfriends to the churches where they work, but it’s not fair to the man whose story they’re pretending to tell. Even his eventual ordination (it’s not a spoiler, it’s on the dang poster), his condition is exaggerated as more progressed than it was. Frankly it’s a little disingenuous. Whether we blame Wahlberg as the producer or the writer/director Rosalind Ross, it’s glaringly obvious that the most Catholic people connected to this story (Walberg and Gibson) managed to completely miss the point of a solid Catholic life worth lived.

There isn’t nearly enough time spent on how Father Stu connected with everyday people – which is how the real Father Stuart Long is remembered. Not enough time spent on the healing relationship of father and son that has to amount to more than dad lives in a trailer, drinks a lot of beer, and they argued but it’s better now. This story could have been about any fictional character, but penning events that didn’t happen, to frame the inspirational story that did, feels like a cheat to the man that actually lived that life.

Father Stu is a charming movie with humor and coarse language to make you forget you’re being preached to. 1980s ABC Afterschool Specials were more heavy-handed, so we’ll give it a pass. It’s just superficial enough to take your church group too – if you don’t mind the copious amount of swearing.

Father Stu is streaming now on the following services:
Powered by JustWatch