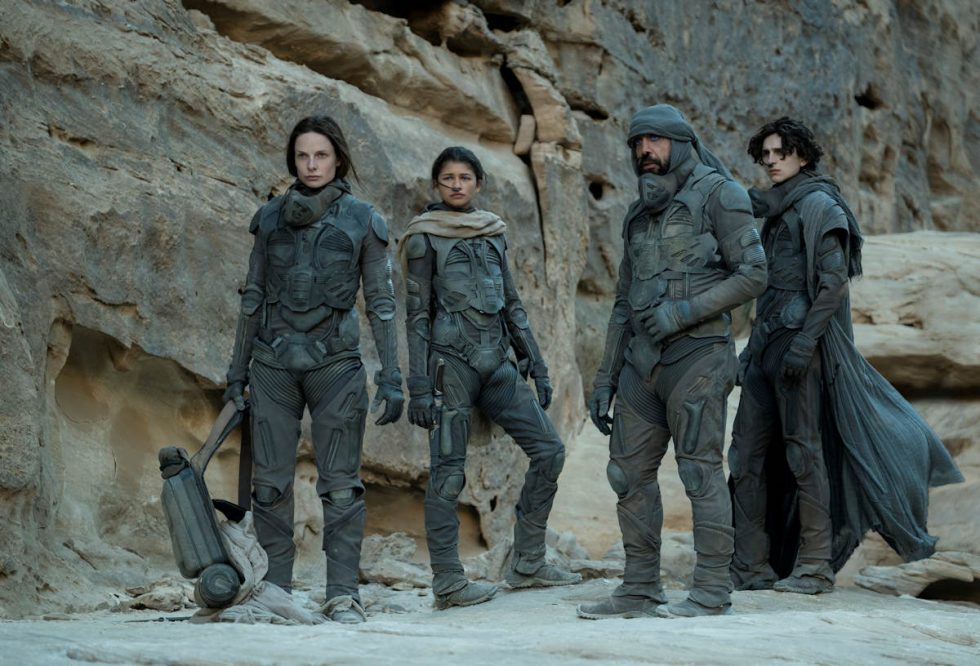 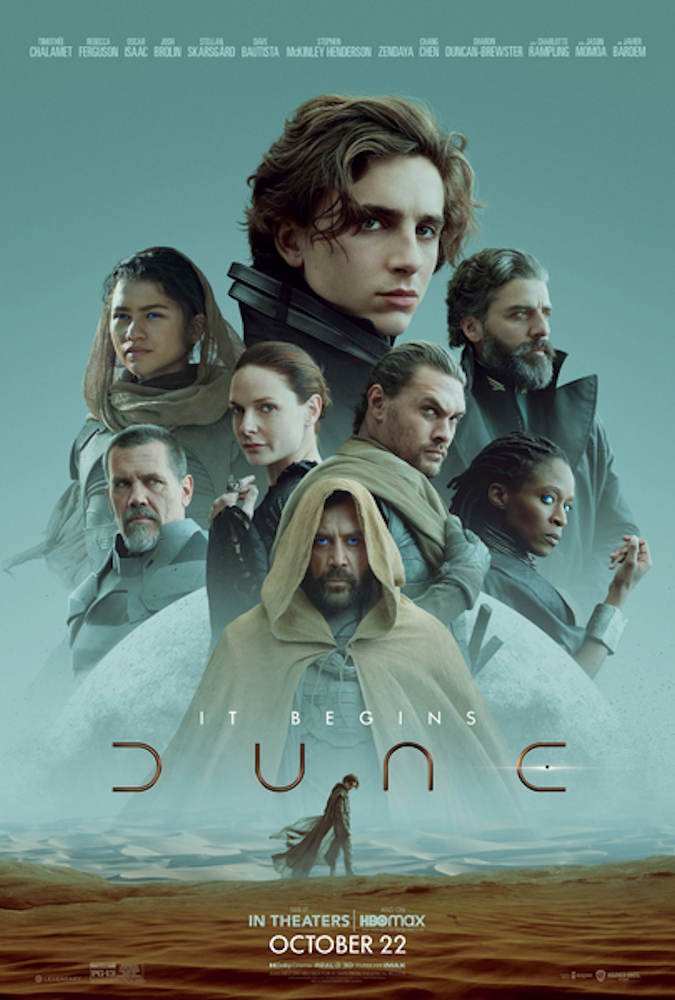 This is Part 1 of Dune (2021), y’all so get comfortable. I know this because when the lights went down in the theater and the title card shown big and bright on the screen it said DUNE (Part 1), and Lord love a duck, I cursed a little. However as many of us are apt to complain about our epic novels crammed into 2.5-hour affairs, I can’t say I’m mad. It’s broken into pieces that don’t feel (really) long and actually look lush despite the harsh desert conditions so we’re not really mad at all. Just mildly irritated.

The Planet Arrakis is desert, like all of it. Its one marketable commodity is mélange or Spice, which can power ships, enhance the powers of the mind, and regenerate aging bodies – but the spice itself is only a thing as opposed to the thing in Part 1. What we focus on is the political power struggle for control of its harvest and distribution. The unseen Emperor has, for his own reasons, removed control of Arrakis from “dark and brutal” House Harkonnen to “trying to do the right thing” House Atreides. No one seems happy about this, Duke Atreides (Oscar Isaac) least of all because he’s left with harvesting a very marketable product that only powers the entire universe with damaged and outdated equipment, but he’s determined to forge alliances and make due. He also knows he’s being set up to fail without knowing why, but he can only make the best of a garbage situation.

Meanwhile, Young Master Paul Atreides (Timothée Chalamet) is unsure of his future role as Duke to the House Atreides as his father would like, but is steered towards latent mystical abilities carefully honed by his mother, Lady Jessica (Rebecca Ferguson) Paul has dreams of the desert, though he was raised on an ocean planet. In his dreams, he sees a blue-eyed girl who is either a future love interest or a means to his end, his visions can’t make up their mind and like his dad, he really just wants to do the right thing. Paul is trained by Duncan Idaho (Jason Mamoa), swordmaster, Gurney Halleck (Josh Brolin), weapons master, two sides of the same unyielding warrior coin, both tough where his father is gentle and nurturing. Their training methods are decidedly disparate, but when used together, Paul potentially has the ability to be the kind of leader his people may need when he comes of age.

Anyway, there is the inevitable betrayal and Paul is forced to flee into the desert to make nice with the native Freman, while warring Houses make their way to Arrakis to claim the spoils of an unprotected planet.

Did I mention the sandworms? There are sandworms and not the Burtonesque variety either. There are motion-sensing, multi-toothed behemoths, faster than worms have the right, and they make things like spice mining and fleeing through the desert particularly treacherous.

So yeah, a lot of Dune (pt 1) is this set up so we can get to know the characters, and to its credit, these introductions aren’t the boring spotlight variety. Everyone is given a chance to interact with one another, each integral to the story lock locking pieces, so as this series continues to bloom through parts 2 (and maybe 3???), we shouldn’t have any surprises. Like all Quest-Sci-Fi-Fantasy series, there is a power struggle, a family torn apart, uneasy alliances, an unsuspecting hero, so (again) no surprises there. This is also a movie where the scenes are so well framed, you can feel the heat of the desert upon first arrival, and the flecks of sand and spice that undoubtedly get into everything. The stark shift from the heat of topside to the cool stone interiors of below is tangible. The very landscape of stone and sand feels alive

Dune (Part 1) is 155 minutes, and in only a few moments did you get the feeling it was running long, however, it’s extremely well-paced, as characters, factions, and plans are allowed to spool out in as natural a fashion as living on a desert planet with valuable sand and warring Houses descending upon your head can be. What I’m trying to say is that it doesn’t feel long drawn out, as if the direct owes anything to the source material, but it also doesn’t feel rushed, with events happening in due time rather than “do it now.” The multiple parts help because while David Lynch certainly tried with his adaptation (Dune, 1984), not even the director’s cut did it justice. I’m looking forward to more to come with Part 2, and maybe if we’re very lucky, we see a cinematic completion of the series in our lifetime.

Dune (2021) is rated PG-13 for bloody images, people fighting with swords, shot with darts, and slashed with knives, as well as people eaten by sandworms, blown up, and beheaded.

Dune is streaming now on the following services:
Powered by JustWatch