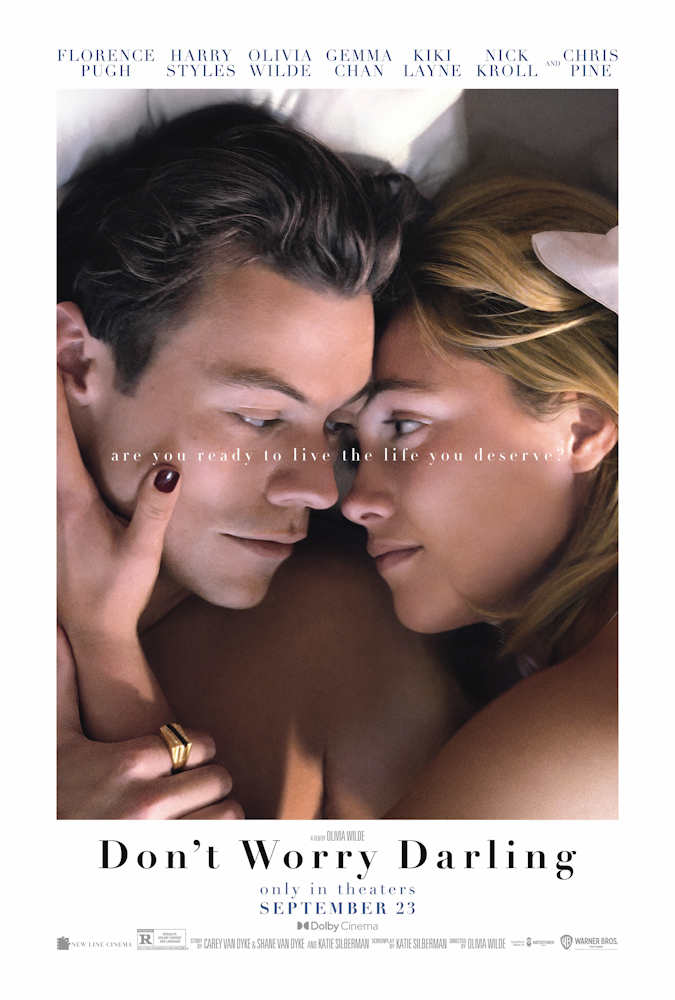 Because I tend to stay away from the gossip rags and entertainment sites, I had no idea about the grumblings on and off the set of Olivia Wilde’s directorial debut, Don’t Worry Darling (2022). I don’t think it would have made a difference in my opinion of the movie. It’s just not what it wants to be.

Alice (Florence Pugh) is living the all-American dream of the 1960’s upper middle class. They live in a modest home in the company community of Victory, nestled somewhere between Nevada and the Pacific Ocean. Her husband Jack (Harry Styles) seems to have the job of his dreams working for, well, that’s classified information. Alice and Jack are surrounded by like-minded neighbors who throw wonderful parties and have delightful children. There seems to be zero to worry about – not even the random earthquakes, the jobs the men can never talk about, the parts of the community they can never go to, or the random disappearances that won’t be explained.

When Alice sees her neighbor Margaret (Kiki Layne) throw herself off her roof, she tries to get answers but is blocked at every turn. Margaret was troubled and acting strange in a time when pills were the preferred prescription and she refused them even at the best of times. When the day terrors begin for Alice and she feels her mind slipping away, her search for answers only compounds her isolation and could lead to not only confrontation with Jack’s boss Frank (Chris Pine), but expulsion from Victory.

Without giving too much away, we can call this Stepford Wives Adjacent. With all modern lenses turned to the manufactured nostalgia of the 1950s and 1960s, there is always one major component missing this – living a life of perfect contentment, with chores, shopping, cooking and making one’s bae happy. While feeling this level of contentment and fulfillment was absolutely a choice for a lot of women – the assumption that it was a hellhole is a mixed message Wilde can’t get past. Not every woman has ambitions outside of the home, and while this film managed to recognize that homemaking was indeed a full-time job, Don’t Worry Darling wasn’t without a few backhanded jabs.

In the production notes provided, story writers/executive producers Carey and Shane Van Dyke say the story “really came after browsing through old 1950’s advertisements, many of which paint a picture of an ‘oh so perfect’ patriarchal society, with women there to serve their always-smiling husbands. Suddenly, the world depicted in those ads became a very terrifying place in our minds, especially for a woman, and we knew we had to find a way in and explore through the lens of a psychological thriller.”

Therein lies the problem. I mean, I work a 9-5 job plus a side-hustle. The life as a company wife in Victory looks pretty sweet. My responsibilities would be cooking, cleaning, and shopping. Then in the evening my husband comes home, he has a drink, and we have fabulous sex on the kitchen table. I’m not seeing the issue. And while there is definitely an issue in Victory, being a pampered housewife is the least of it. The pearl-clutching reveal is unveiled in such a fashion that can only be described as ham-handed and clumsy. Not enough thought is given to the why or the how, and worse, to what happens next?

On top of that, far too many unanswered questions remain as the credits roll, from the earthquakes to the dancing bathing beauties to what was at the top of the hill (you know, the hill), to the extended Harry Styles Dance Number that went on far too long. It also suffers one of the most hated tropes in all of cinema – disposable People of Color.

Florence Pugh as always gives a performance that is both believable and thrilling, though she loses some of that sharp edge when she dips her toe into the pools of hysteria and then the script forces her to dive in. Peg Berlent, as the perpetually pregnant Peg, delivers her role as a rough-edged neighbor who lacks a filter between her brain and her mouth with near-perfect comedic timing. Chris Pine as the enigmatic Frank is still slowly sloughing off the taint as Fanny Pack Steve in Wonder Woman 1984 (2021) but manages to deliver only barely neutered menace. Harry Styles was good too. I guess.

I wanted to like Don’t Worry Darling way more than I did, going in nearly blind and expecting nothing. Sadly, I got little more than a handful of good performances pantomiming an aesthetic in a beautiful, if empty, set piece. There was a bigger more exciting story to tell, but flipping through magazines isn’t the way to tell it. If you’re going to crib from the classics, make sure the new edge you’re showcasing has something to say louder than a drunken whine.

Don't Worry Darling is streaming now on the following services:
Powered by JustWatch