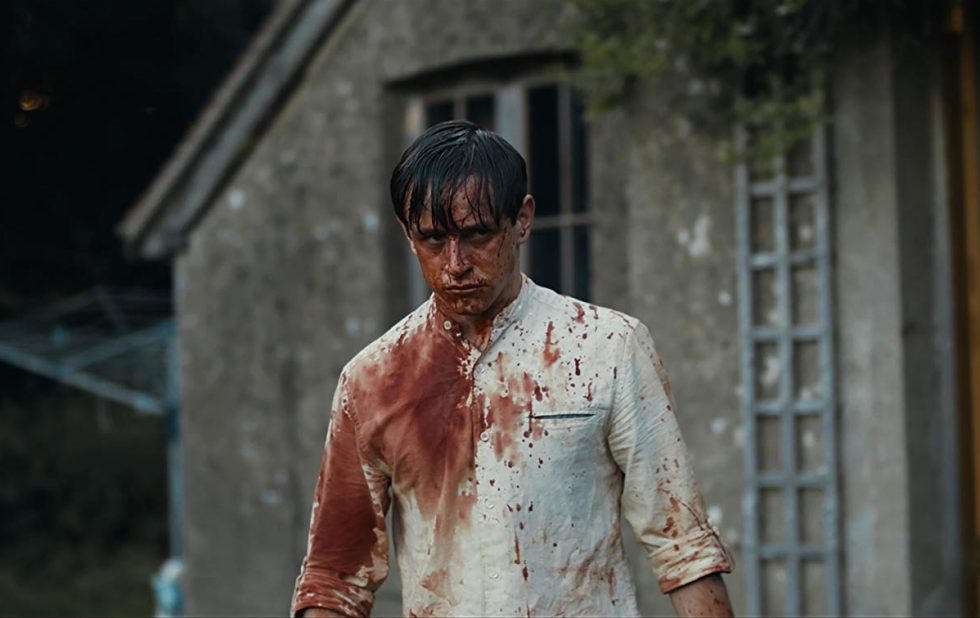 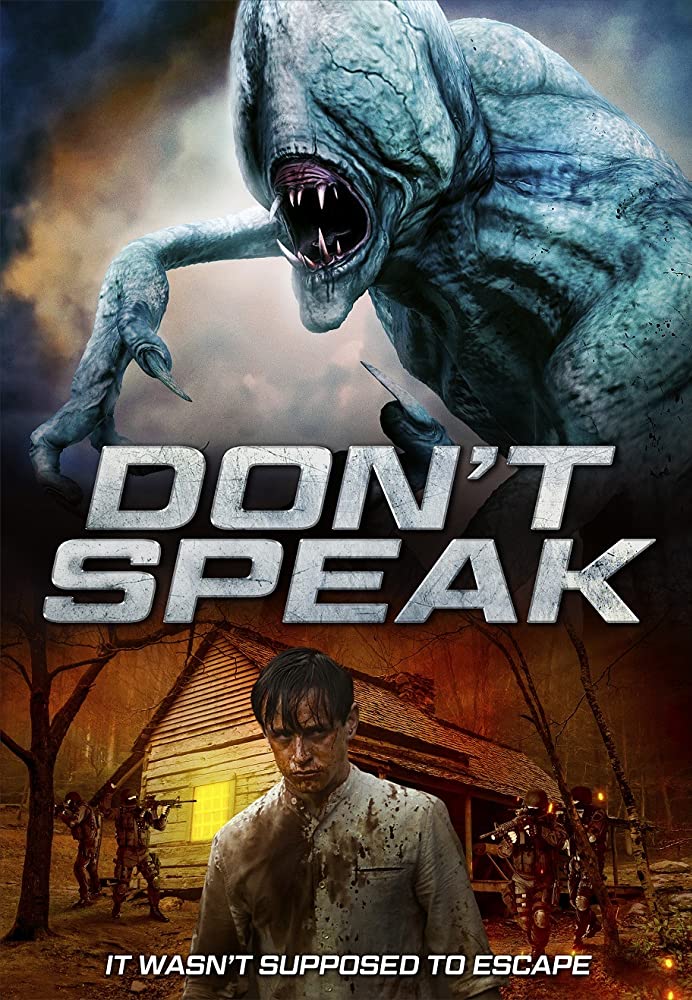 A family heads to the country to tend to the matriarch’s solitude while her husband is in the hospital (or something), and finds themselves trapped by a monster that can only track them by sound in Don’t Speak, produced by Proportion Productions and released by our good friends at Uncork’d Entertainment. Someone (maybe writer-director Scott Jeffrey) watched A Quiet Place (2018) and said, “that movie needs a prequel to be set in England”. Its alternative title is Silent Place, but no one needed to be sued for more than the movie will ever gross, so Don’t Speak it is.

There is a creature hunting this unknown town and it’s eating people, filling them full of eggs and stringing them up like fresh mozzarella. Rita (Stephanie Lodge) and Alan (Ryan Davies) rush to her Mom’s (Helen Minassian) side after Rita’s father fall’s ill. It becomes a family affair as son Ben (Jake Watkins) and daughter Charlie (Georgina Jane) come with, and for some inexplicable reason, Charlie’s boyfriend, Tyler (Will Stanton) also joins them. Once they arrive they discover the town is empty, everyone is missing, and there is a creature hunting them. Oh – and nothing electrical, like cars or cellphones, works (except flashlights – ssshhhhhh). Could the military installation nearby have something to do with it? No one knows.

Literally, no one knows.

Don’t Speak has a lot of blood and spiders and gore, and if you love that sort of thing, then step right up. This would have made a fantastic short film of about 30-45 minutes, but it’s 83 minutes and that’s a long time to pretend you’re watching something fun. It has its moments, but there aren’t enough of them.

The acting isn’t bad, though it’s clearly an English-made film (cars, town, people), and the actors are working really hard on their American accents. The lighting is atmospheric and the music is appropriate for the scenes without being intrusive. We’re also treated to a night-time laundry hanging scene, because even laundry is terrifying at night, so kudos to the cinematographer!

There is, however, a lot of padding. A. Lot. Walking, shuddery breathing, and screaming, all of it take several minutes longer than it should. Everyone seems to have an inner-ear disorder because no one can run without falling. There is a monster that I *thought* vomited a paralytic (it doesn’t) which made people unable to run (it’s just slobber) and for some reason, despite being a bi-ped, the creature’s scratches and bites leave eggs which produce spiders.

I don’t know if the military had a hand in that because the number of practical applications for that skill is zero.

The writing could have used a few passes with a few more eyes and the characters were not as fleshed out as they could have been. The son has a secret he needs to tell mom and dad, but his secret compared to the obvious sex his sister and her tagalong boyfriend are likely having seems pedestrian. Movie Mom and Dad are written as 1980s Made-for-TV Movie Mom and Dad, which is unfortunate because it’s 2020 and these are Gen-Xers who grew up on the same monster stuff I did and I expect them to have a little personality. Other than bleeding, falling, and crying, they aren’t given much to do, and that’s a shame. Also, no one can lip read “RUN” so clearly everyone is doomed.

Don’t Speak is unrated but I would have to guess it would probably rated PG-13 for buckets of blood, people bleeding spiders while hung in cocoons, the body horror of having ball-bearing sized eggs laid under the skin, people running, people being torn open, people dying while choking on their own blood.

Don't Speak is streaming now on the following services:
Powered by JustWatch