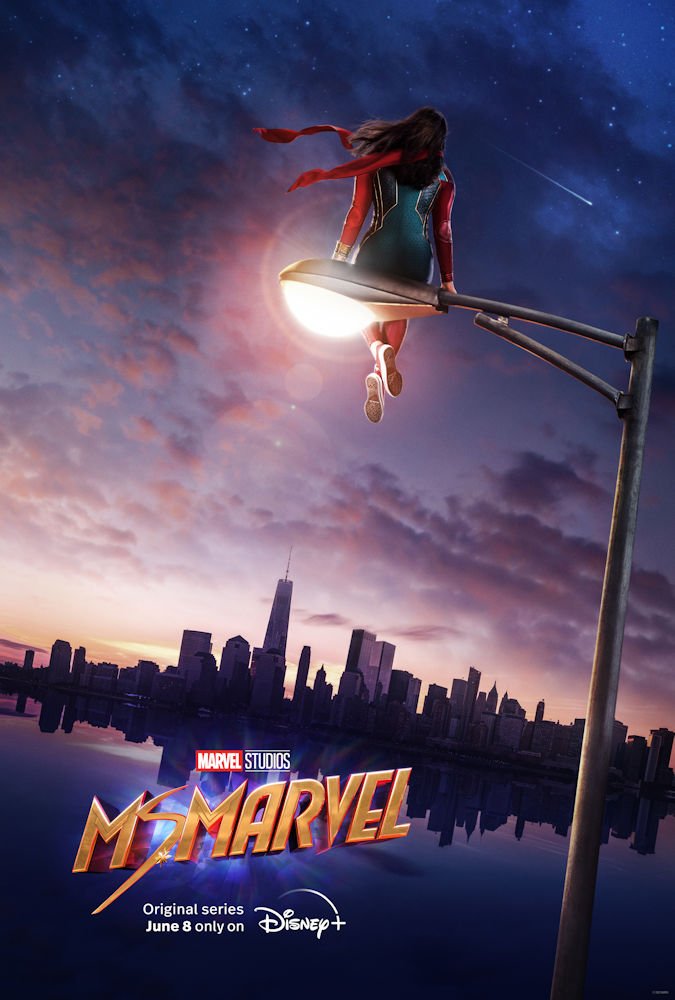 I was given the opportunity by Disney+ to preview the first two episodes of its new series, Ms. Marvel, and here’s what I can tell you:

Kamala (Iman Vallani) is a 16-year-old teenager living in Jersey City. Her current obsession in life is Captain Marvel and her heroic exploits during Battle for Earth, complete with a podcast, drawings, and Marvel-themed bedroom. If you’re not totally caught up with Captain Marvel lore, you’ll get a Gen-Z style primer as told in rapid-fire animation. It’s probably the most clever bit of info dump.

Living with her traditional Pakistani-American family, Mother Muneeba (Zenobia Shroff) and Father Yusuf (Mohan Kapoor) make basic existing difficult for Kamala, as they want her to buckle down and study and focus on her own life. The family is planning her older brother Hasan’s wedding, and if you know anything about Pakistani wedding celebrations, it’s an undertaking that can last days. Also hanging over the Khan family is a Dark Curse, which I’m guessing will be explained better and in more depth in coming episodes. The family dynamic is frenetic and staccato dialogue and it’s hard to imagine anyone actually listens to one another, but I don’t have kids so maybe this is normal.

Episode 1 “Generation Why” centers entirely on Kamala’s struggles getting permission to go to Avengercon (inexplicably an evening event) and scoring transportation as she has failed her driver’s license exam. Kamala and her best friend, Bruno (Matt Lintz) are crafting the perfect costume and are desperate to win the cosplay contest. Kamala wears a gauntlet sent by her grandmother from Pakistan, giving her powers like her hero with predictably chaotic results. This origin flip from Terrigen mist to cultural item has some comic fans have been complaining about, but this isn’t about them.

Episode 2 has Kamala dealing with the fallout of accidentally debuting her powers in an uncontrolled public setting and regaining her family’s trust after lying. Her best friend Nakia (Yasmeen Fletcher) wants to run for a position within their community mosque to lobby for better conditions for women. There’s a very clever layperson’s breakdown of the various cliques Nakia has to impress in order to gain votes and it’s one of the gems in the writing for Ms. Marvel. We also have a training montage, and another surprise opportunity to use her powers that doesn’t go exactly as planned.

For a superhero, Kamala is average. She has friends but isn’t wildly popular.  She loves her family, but squabbles with her parents. She sneaks out but Learns a Lesson. As of episode 2, she doesn’t even have a nemesis. All of this is great and topical and I applaud any studio that depicts average teens who don’t live in a hotel or drive expensive cars or are vampires dating werewolves, and if I was in the target demographic of 14-17, this show would totally speak to me #fireemoji #heart #marvel4evah.

But I’m a lot older than 16 and hot on the heels of Pixar/Disney’s animated coming of age/inner monster movie, Turning Red (2022), this is very familiar ground. It feels like another “average teen becomes a magical girl and saves the world before curfew.” I know I sound jaded, and in a world of cookie-cutter programming, it’s nice to see a little culture and age diversity actively developed to be wrapped into the overall MCU. We’ll see Kamala Khan again in 2023’s The Marvels with Carol Danvers (Brie Larson) and Monica Rambeau (Teyonah Paris).

However, here is both too much and not enough crammed into the first two episodes of Ms. Marvel’s six-episode run. With as many characters as have been introduced, none of them, not even Kamala herself, stand out as someone to strongly connect with. The pacing of the episodes seems slow when the subject in question is always and creatively on the move. If you’re going in expecting action and shooting and long noodly arms, you may have to dial back your excitement. We haven’t met a villain that was a threat beyond Kamala’s flagging social media followers and even the Government Agent briefly hinted at during the post-credit sequence of Episode 1 (yeah, you’ll have to stick around) is more nebulous than concerning.

There’s no doubt I’ll stick around for the full run of Ms. Marvel. I’m just a little disappointed that it didn’t grab me in a way like the series Cloak and Dagger (2018) or Loki (2021) had from the very beginning, but I’m still willing to stick it out.

Ms. Marvel is exclusively on Disney+ and is rated TV-PG for kids jumping out of second-floor windows, sneaking out of the house, staying out past curfew, and getting in trouble. There are two sequences where kids fall from greater heights, but it’s Disney+ and they are not knocking off kids, yet.