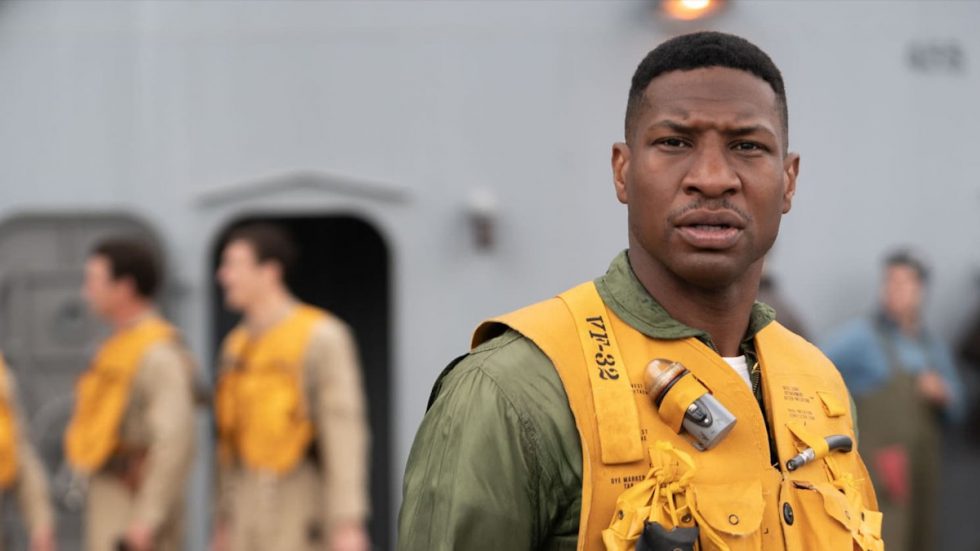 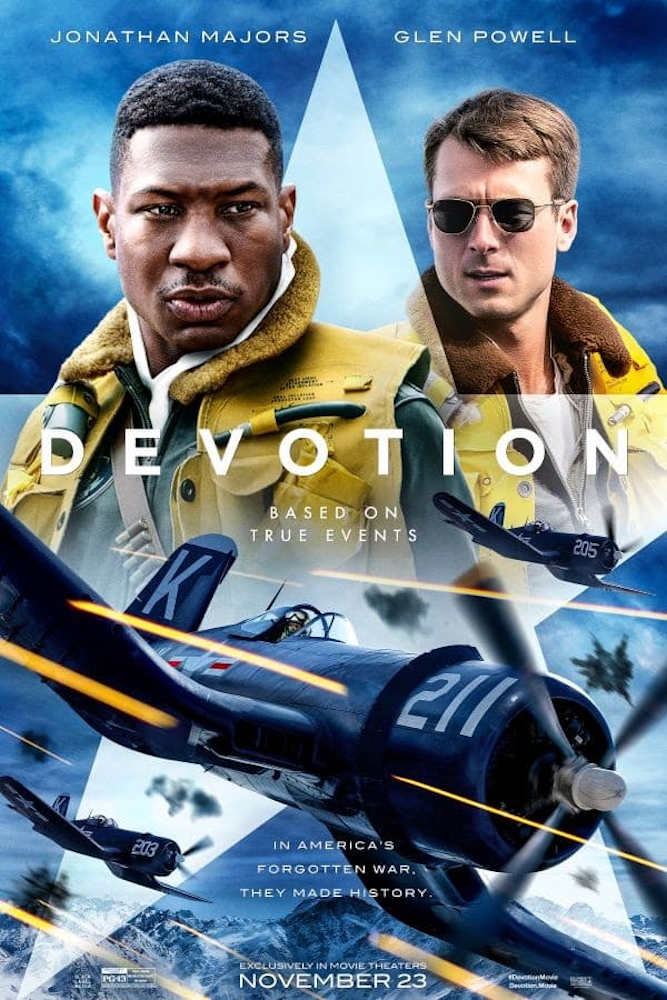 The story of Jesse “JL” Brown isn’t spoken of in textbooks like Rosa Parks or Jackie Robinson, but maybe he should be. Devotion (2022) tells the story of the first Black American aviator to complete flight school in the US Navy. He and his wingman, Tom Hudner are best known for their heroic maneuvers during the Battle of Chosin Reservoir in 1950.

Based on the biography, Devotion: An Epic Story of Heroism, Friendship, and Sacrifice, by Adam Makos, Devotion doesn’t give Brown’s entire life story, but instead focuses on his time at military bases in Pensacola and Rhode Island, and aboard the USS Leyte, as well as his brief time overseas.

Ensign Jesse Brown (Jonathan Majors) is an officer in the US Navy, training in Post-War America along the eastern seaboard. He and his wife Daisy (Christina Jackson) settle into an uneasy routine of existing quietly while Black, so as to not rise the ire of their neighbors. He’s assigned a new wingman, Tom Hudner (Glen Powell), a graduate of the US Naval Academy who laments that they joined the military too late to do any good. Together, they form a solid friendship with Tom doing most of the talking. It isn’t long before they’re flying dangerous support missions at the onset of the Korean War where they would go on to become some of the Navy’s most decorated airmen.

While Devotion doesn’t downplay the racism of the period, it definitely takes a back seat to Brown’s subdued demeanor. In this adaptation, he is almost a secondary player in his own life. He’s a loner who keeps to himself but is still regarded highly by his peers. He prefers to not make waves or get into altercations, and he doesn’t talk about his accomplishments. When speaking with reporters, he prefers to not talk about race. Director J.D. Dillard takes great pains to have Brown in the background to remain unnoticed, and whether that’s a product of unspoken trauma or a loose interpretation of the source material is unclear. We only see Brown smile and comfortable in his own skin really when he is either with or thinking about his wife Daisy. I mean, that’s nice, he loves his wife, but the rest of his life, which is what this movie is about, he’s more of a cardboard stand-in.

And this is going to be odd to hear, but for a movie that has so much emotion packed into the last 18 minutes of the film, Devotion is oddly free of it for the first two hours. Marines get into fistfights, other seamen laugh and joke and the world all around Jesse Brown, who was living history in 1949, is full of life and excitement. Here’s Jesse at home with his beautiful wife and their daughter Pam. Here’s Jessie on the base, quiet as a background character in a busy café scene. Here’s Jesse landing a plane onto an aircraft carrier – hope he doesn’t crash, because that would end the movie far too soon. Here’s Jesse meeting Elizabeth Taylor in France. These moments of what could be compassion or camaraderie are cheerless and without color. In an effort to portray Brown as humble, Dillard forgot to make him a human with emotions beyond bottled-up rage. Daisy, for her efforts, is given the same treatment, presented as the strong silent Black woman who holds her head high and doesn’t cry despite suffering loss and pain.

I’m of two minds about Devotion. It’s a relatively solid biopic which shows Jesse Brown as the first Black aviator in US Naval history, and as an intelligent officer who could handle himself in tense situations. Yet, we don’t get to know Jesse Brown except in the ways he quietly interacts with others, and it’s not enough. This is a two-dimensional depiction in a three-dimensional medium and it’s far less than he deserves.

Devotion is Rated PG-13 for mild swears, smoking, incidents of racism which I can count on less than one hand, airborne firefights, three crashes: one almost off screen, one intentional, and one that will make you cry.

Devotion is streaming now on the following services:
Powered by JustWatch