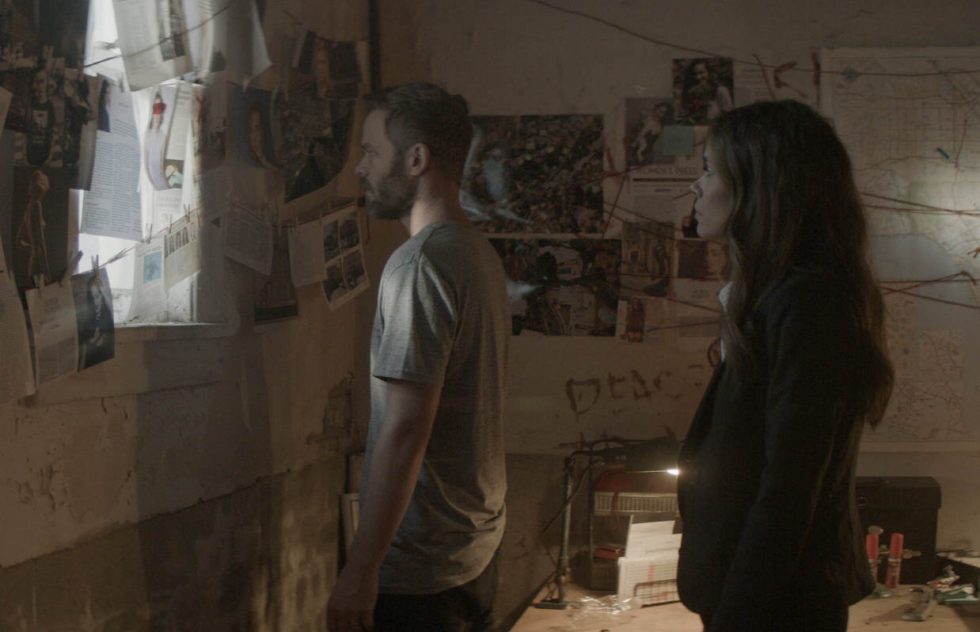 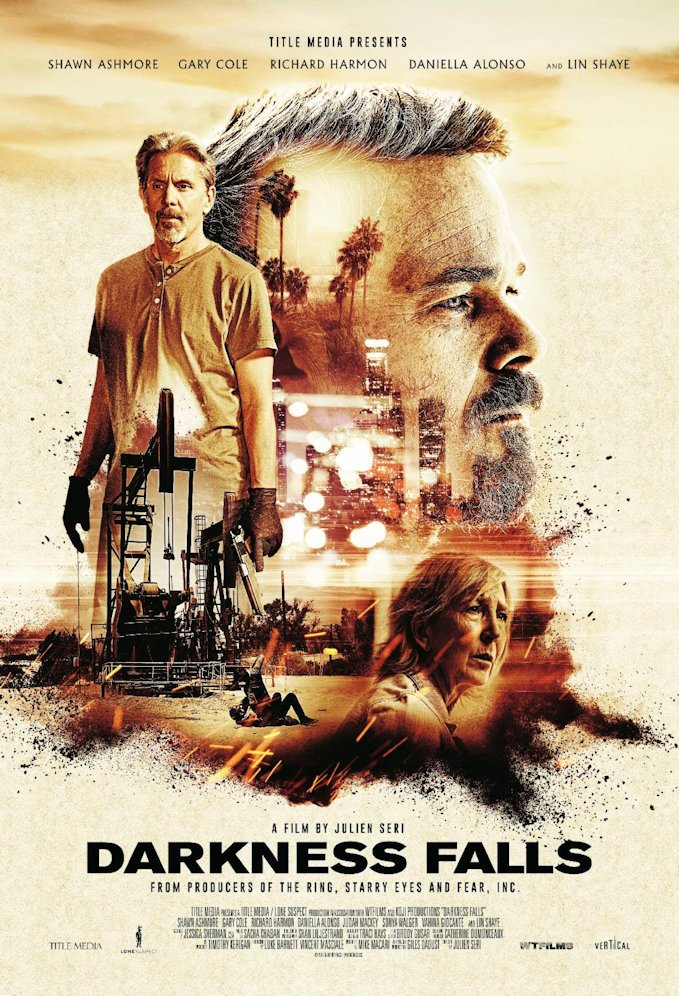 Darkness Falls (2019) is a tortured thriller about a LAPD detective hunting a pair of serial killers who use staged suicides as their calling card.

LAPD Homicide detective, Jeff Anderson (Shawn Ashmore), loses his wife to a staged suicide, courtesy of father/son killers (Gary Cole/Richard Harmon). Staged because they make their victims take sleeping pills and when they’re sufficiently drugged, slit their wrists and drown them in their own bathtubs. If the women refuse to comply, any nearby children are put at risk. Jeff’s wife was a victim, and six months later, his career is faltering, he’s losing touch with his son, and he’s no closer to solving his wife’s murder, which everyone assumes is a suicide. Not believing a homicide detective you leave on the force to solve crimes is exactly why people have trust issues with the police.

Detective Jeff’s theory is that prominent women are targeted by these killers after appearing in the press for their accomplishments, clearly abandoning their families for a few lines of print in a magazine. Appearing in magazines and then killing themselves is something everyone does in LA, so no one bothers to investigate, or even gather things like tox reports and photos. A few manic episodes and one traumatized survivor later, Detective Jeff has connected the dots, he’s on the trail of the suicide murderers headed for a bloody showdown.

“You understand what I have to do,” says Detective Jeff after creating a murder board and having a minor existential breakdown.  Sure, Detective. Go off half-cocked. That always works in the American movies.

Jeff sets out to stop the bad guys, risking what’s left of his family, his sanity, and his job for the only case that has ever mattered to him. Ever.  I think we’re supposed to draw parallels between nature and nurture, Detective Dad and the Killer Dad – he doesn’t get a name because he’s a filthy murderer. Cops that live to solve that one single case aren’t nearly as interesting as they used to be, but that won’t stop the French from romanticizing the heck out of cops who drink heavily, scream at pictures of their dead wives, and sleep in their cars.

Darkness Falls is a thin cop thriller and a thinner psychological thriller that for some reason has been labeled “Horror”. It’s not, so there’s your warning. If you’re expecting this police procedural to be anything like an actually thrilling police procedural with lots of twists and turns and maybe gunplay, maybe you can watch 21 Bridges (2019) instead.

Darkness Falls is uneven, to put it kindly and it’s a long, padded 83 minutes. It’s an American cop drama written and directed by people who’ve only ever watch melodramatic cop dramas, and unfortunately for them, American audiences are hip to how things are done – and this ain’t it. The protagonist is not only unstable, but he’s also unreliable, and for a brilliant detective, he’s super sloppy at his job. The victims play their roles as if the character studies were written by people who hate cops, women, kids, and coherent plots. The killers are really, really talkative, and they have monologue-length reasons for being terrible people. These reasons sadly sound rational and sane and straight of every 90s psychodrama police procedural and the previous edition of the DSM. It’s a misogynist’s wet dream where successful women abandon their husbands and sons so they can be murdered in the name of complicated mommy issues.

For a thriller, the teeth have been taken out in favor of melodrama and direction and camera work, courtesy of director Julien Seri. For a police procedural, I don’t believe screenwriter Giles Daoust has never actually seen an American one, so the central piece of several prominent women dying by suicide after appearing in news media and not so much as a single task force feels incredibly lazy.

I don’t recommend Darkness Falls (aka Anderson Falls), even though it has Lin Shaye – and I love Lin Shaye. I watch everything Lin Shaye is in, and sometimes (I’m sorry, my future best friend), like Darkness Falls, they aren’t very good, not even by the standards of direct to VOD (call me).

Anyway, If you want a better Lin Shaye horror movie, I recommend Room for Rent (2019). It’s my favorite so far. If you want to see Gary Cole not be a boring chatterbox with a razor and Law and Order motives, try to track down American Gothic (ABC,1990). I loved that show. I simply can’t recommend Darkness Falls.

Darkness Falls (2019) is unrated but if I had to guess, I’d say Rated R for the longest slowest ten-minute murder, non-consensual drug use, people getting shot, people getting beat up, and women getting suicided (their word). Darkness Falls is streaming everywhere on VOD and Digital platforms including iTunes, Amazon, Apple TV, Google Play, FandangoNow, and all major cable/satellite platforms.

Darkness Falls is streaming now on the following services:
Powered by JustWatch