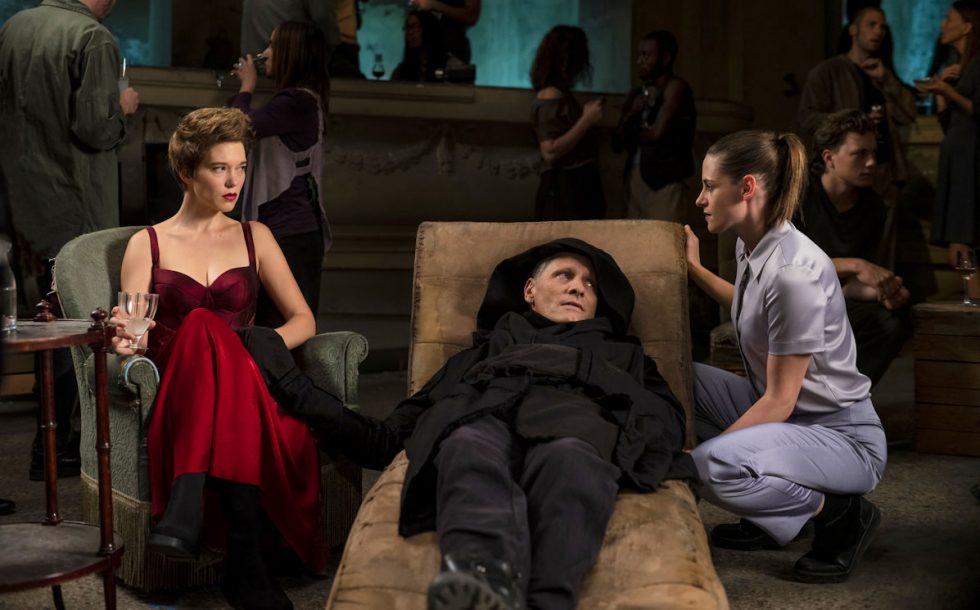 Crimes of the Future Movie Review

Crimes of the Future Movie Poster 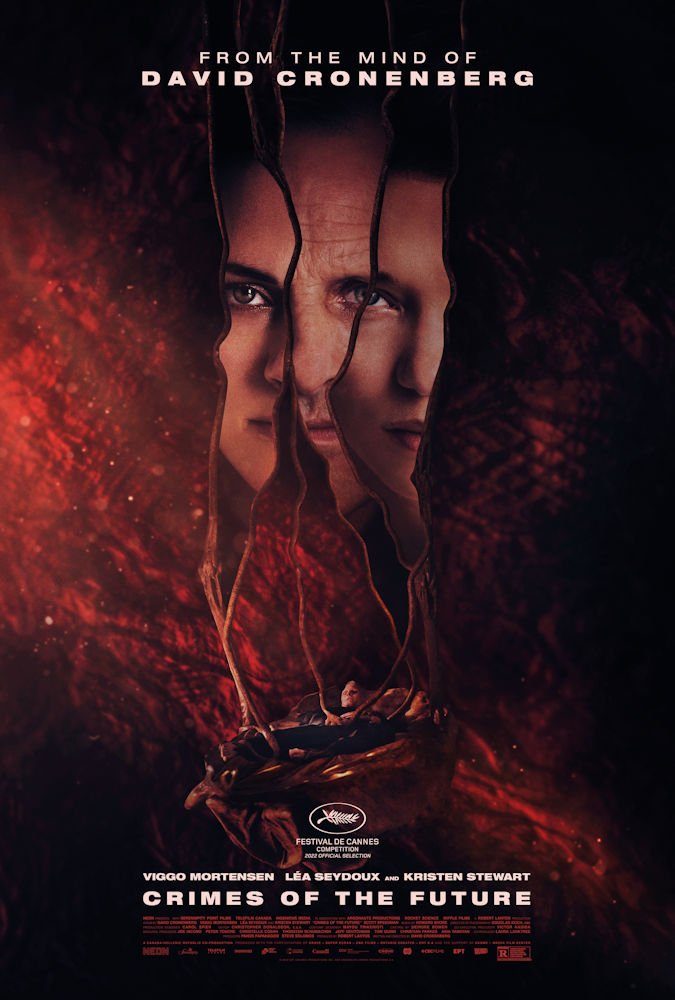 Crimes of the Future Movie Metadata

Crimes of the Future

Crimes of the Future External Links

Crimes of the Future Movie Trailer

Crimes of the Future Movie Tickets

Whatever you’re expecting from David Cronenberg’s Crimes of the Future (2022), like extreme body horror, clarity, likable characters, or coherency, maybe wait for streaming.

In the not-so-distant future, the world is a sterile and toxic place, more synthetic than organic. Saul (Viggo Mortensen) and Caprice (Léa Seydoux) are performance artists. Saul spontaneously grows weird new organs and Caprice hosts live art shows where she slices him open and tattoos a design on the new organs before removing them with some weird contraption that’s supposed to be a repurposed autopsy machine (sure). In this brave new world, humans have lost the ability to feel pain, and crave more extreme experiences. Surgery is the new sex and body modifications are like tiny dogs in purses, meant to be flashed for the shock value, and everybody owns one.

At the National Organ Registry, they’re cataloging all of Saul’s new organs, as well as anyone else that is evolving. They are infatuated with his otherness. Timlin (Kristen Stewart), is a government paper-pusher with a stilted cadence and shifty eyes that are supposed to replace a personality brimming with pent-up sexual energy, who corners Saul and tells him she wants to be the one he cuts into. Her partner, Whippet (Don McKellar), wants Saul to enter the Inner Beauties pageant where evolving humans compete in an underground and probably illegal contest to see who has the best useless organs. Humans are evolving at a fast rate, but our intrepid worker bees are housed in a filthy office and cataloguing on paper. For a synthetic world, everything is inexplicably filthy and analog. Saul is a celebrity to them, a rockstar with unending appeal, and why is never explained.

There’s an Organ Vice Detective (Welket Bungué) is working with Saul, and we’re now supposed to believe he’s working undercover to bust up some organ thing. The why is never explained.

Should I mention the drill serial killers? Nah, it’s too ridiculous, and it’s never explained.

Meanwhile, Saul just struggles to breathe and swallow as his body breaks down and grows new organs that Caprice can’t wait to draw on and cut out. Caprice is jealous that she’s not growing any new organs and it’s never explained.

Those people who supposedly walked out during the opening scenes of Crimes of the Future in Cannes? Have they never seen a network medical drama or a gritty police procedural, because it’s not as if director David Cronenberg is breaking any new ground? This is, after all, a remake of his previous 1970 film of the same name. This is decidedly tame. Maybe they saw some extended directors cut at Cannes because I don’t think we saw the same movie. I waited to feel ill or faint or even nauseated because it is Cronenberg and there is still residual trauma from Videodrome (1983), The Fly (1986), and Dead Ringers (1988). It’s one thing for hype to fall short of expectations, that is Marketing 101. It’s entirely another for it to lie completely. We were promised body horror and a thought-provoking if depressing, future fraught with murky choices and dismal consequences. What we got was a Tilt-A-Whirl with bad casters, Giger-looking technology without explanation, and a corpse whose body means less than nothing.

Crimes of the Future wants to be dystopian sci-fi with some postmodern ethics about body autonomy in the face of evolution, wanting to draw that line between what is and isn’t human. If I’m being honest, though, it’s a jumbled mess of student film, self-righteous prognostication, and closed head injury. For a story that should be linear, the scenes as presented simply don’t create a compelling story. You continue to watch because at some point it has to end with something like a satisfying conclusion. The dialogue, at least what I could hear clearly, was comprised of grunts and lots of phlegmy throat clearing. The futuristic gadgets, like his floating bed that helps him sleep or the uncomfortable chair that helps him eat, don’t work. This future has no imagination. This is like Blade Runner (1982) if Blade Runner was filmed in an abandoned warehouse in Flint and the SFX budget consisted of a Roomba, Dustbuster, and an Apple IIe. There should be compelling storytelling wrapped around random futuristic everyday objects designed to help humanity, but everything here feels like leftovers from a Ridley Scott movie.

If you’re a fan of pretentious performance artists, underfunded, incompetent government bureaucrats, and sexy aimless serial killers, I can’t stop you from spending your money and sitting for 107 minutes through an industrial music video starring Dirt and Tetanus. Personally, it was not for me. Maybe the diehard fans will call it a masterpiece, and maybe if I see one of them, they can explain what I clearly missed trying to make sense of it. I expected so much more.

Crimes of the Future (2022) is Rated R for swears, nudity, facial mutilation, sexy stabbings, a man covered in ears, suffocation, the constant sound of choking, drills to the brain, childhood pica, and subdermal body modifications we thought were edgy in 1994.

Crimes of the Future is streaming now on the following services:
Powered by JustWatch