The Conjuring: The Devil Made Me Do It Movie Review

The Conjuring: The Devil Made Me Do It Movie Review Metadata

The Conjuring: The Devil Made Me Do It Movie Poster 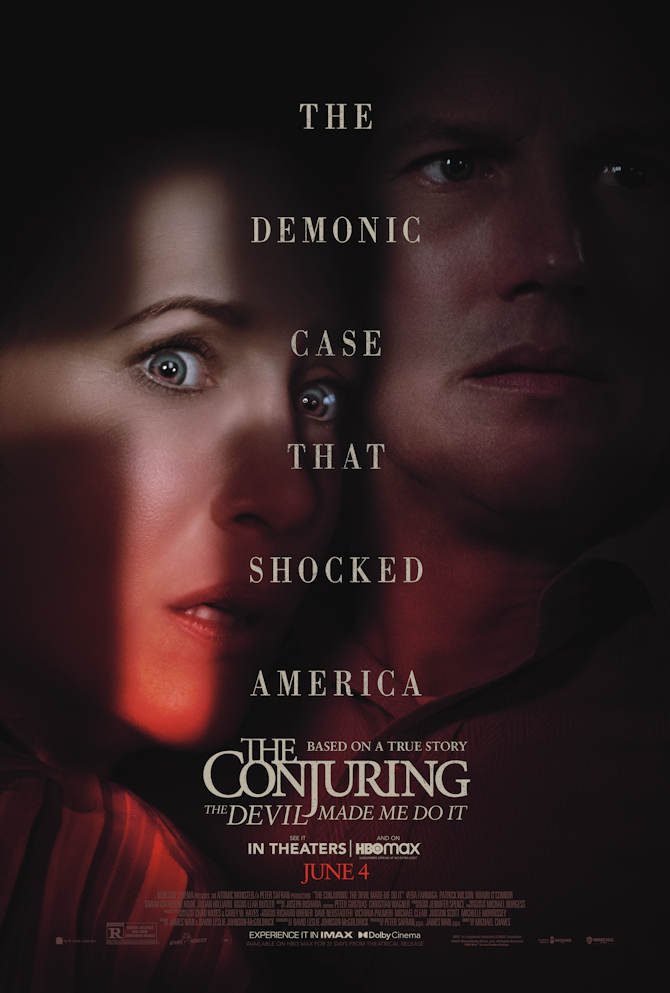 The Conjuring: The Devil Made Me Do It Movie Metadata

The Conjuring: The Devil Made Me Do It

The Conjuring: The Devil Made Me Do It External Links

The Conjuring: The Devil Made Me Do It Movie Trailer

The Conjuring: The Devil Made Me Do It Movie Tickets

To say I’m not a fan of the Warrens, they of the elaborate hoaxes, inserted narratives, and basement museum of haunted thrift-store oddities, would be an understatement. However, for this review of The Conjuring: The Devil Made Me Do It (2021), I can set all of that aside because in this case, the fiction is far better than the reality.

If you know the story of the trial and conviction of Arne Cheyenne Johnson, you’re going to want to set it aside, because facts will just get in the way.

In another unassuming farmhouse in Connecticut, Ed (Patrick Wilson) and Lorraine (Vera Farmiga) Warren, try to exorcise a demon from young David (Julian Hilliard). During a particularly bad stretch of chanting, Arne Johnson (Ruairi O’Conner), boyfriend to David’s sister, Debbie (Sarah Catherine Hook), does the one thing you should probably never do during an exorcism – he demands the demon take in and leave young David alone. Granted, any boyfriend that would attend the exorcism of a younger sibling is a keeper so we can’t be too hard on him. No one seems to notice the transference and it isn’t long before Arne exhibits signs of either schizophrenia or demonic possession. It was the 80s so it could have gone either way. In a fit of rage and/or confusion Arne kills a man he believes is hurting his girlfriend, and because the Warrens are involved, they convince his attorney to claim Not Guilty by Reason of Demonic Possession, which wasn’t a thing, but any port in a judicial storm I guess. The Warrens also put on their Scooby hats and play detective tracking down mysterious artifacts found in the boy’s home linking the murders of young girls to the same demon by way of a Satan-worshipping cult.

The Warrens then look up a retired priest, Kastner (John Noble), an expert who knows all about cults. It’s best you not think too hard about the whys and workings of the cult because the utter random nature of what the cult has promised their pet demon vs the timeframe and what the cult delivers strain at the boundaries of belief.

There are some shenanigans with who knows what as the cult brings together the final pieces for ultimate power (probably) but it all adds up to a rather enjoyable film with plenty of bloody scares and good-natured humor that could make this a Lifetime movie if it weren’t for the demonic imagery and R rating.

The Conjuring: The Devil Made Me Do It has plenty of backstory to soften the edges of Ed and Lorraine, who never had a decent run in the press. Wilson and Farmiga bring warmth and depth to the characters, making them far more likable than they ever were in reality. That said, even in the context of a Conjuring film, it’s heavy-handed and drowns out the development of every other character – including Arne. Because of the focus on the previous crimes, the travel, the medical emergencies, much like every one of the real-life investigations the Warrens inserted themselves into, the story centers solely on them and it takes away from the case they’re sort of responsible for and the family it involves.

The Conjuring: The Devil Made Me Do It is not without its problems, which as a fan you can probably overlook even while you’re rolling your eyes. There are lapses in logic and judgment, judicial weirdness that only happens in movies, and a real cocky sass to Lorraine that felt a little forced. However, if you can look past what feels like a reinvention of the Warrens’ Greatest Hits That Probably Didn’t Happen That Way, it’s a great popcorn movie. The scares feel genuine, even if the story is so much hot air. There’s good tension with decent payoffs and you won’t feel cheated when the credits roll.

The Conjuring: The Devil Made Me Do It (2021) is Rated R for people getting stabbed, totems made from bones, medical emergencies, children in grotesque positions, lots of screaming, suicide, cultists, and the usual gruesome face altering that can only come from demonic possession.