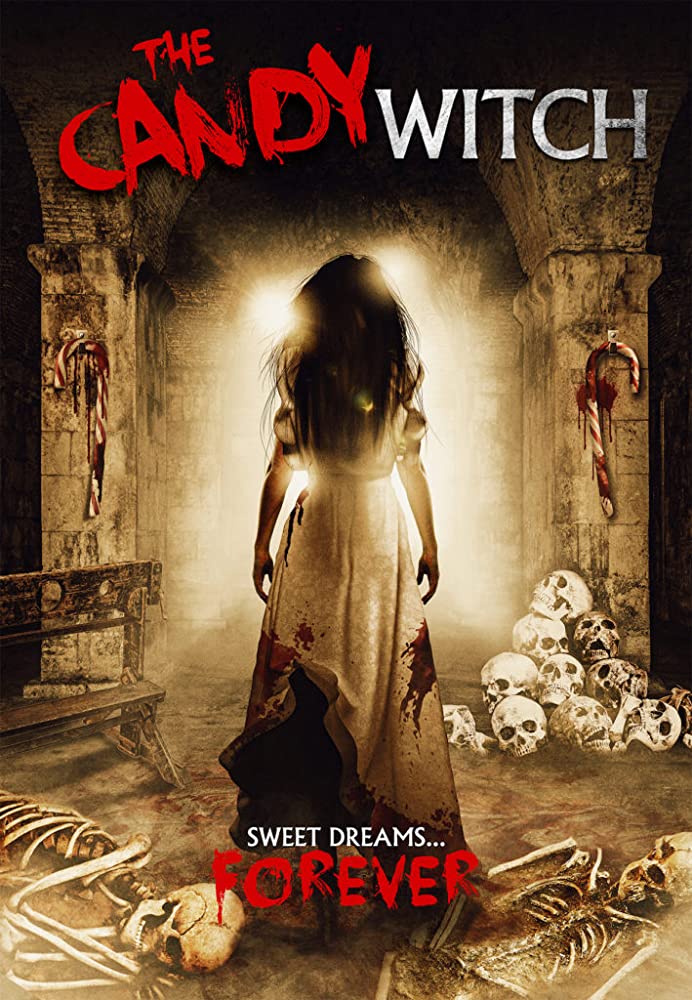 I’m going to be kind.

The Candy Witch (2020) feels like it could be a very first good effort for a newly minted screenwriter and out of the box director. That isn’t the case at all with Scott Jeffrey or Rebecca Matthews, but we’re going to pretend they’ve never written or directed horror movies before.

They’ve assembled a cast of very talented actors to breathe life into a script that could have used a little more polish. These intrepid souls took what they were given and they pumped their all into it. I respect the heck out of that.

The Candy Witch feels like it wanted to be a revenge movie based on a wronged nanny who escaped from a basement prison to exact revenge on a family who slandered her name. That’s not what The Candy Witch is (at all), but if you pretend for the first 65 minutes it helps.

So let’s pretend that this American Family in an expansive English Manor hears knockings in the walls and sees a menacing woman on their grounds. They can’t call the police because they’re pretty sure it’s a ghost, so instead they call Reese (Jon Calloway), an internet-famous psychic who talks to ghosts and leads them to the other side (I guess). His partner, Kat (Abi Casson Thompson) is a family liaison of sorts and does the legwork by getting to know the family and investigating the backstory so we can all figure out who’s a fraud.

The family, made up of matriarch Ruth (Heather Jackson), husband, Willie (Richard D Myers), daughter Lea (Will Stanton), and son Tom, are years removed (I MEAN YEARS) from an incident involving their missing nanny, Jennifer (Kate Lush). They’re however convinced it’s her evil ghost, now dubbed the Candy Witch (because she gave candy to kids she liked ???) and they want Reese to Do Something About It.

While the Candy Witch, is killing people unconnected with her personal trauma (like a neighbor murdered with a pot of cooking chocolate and a boyfriend who walks home through the woods instead of ON THE ROAD RIGHT OUTSIDE THE MANOR), Reese and Kat set about looking in boxes and talking to women on houseboats. There is a goodly amount of filler.

Not for nothing, Kate Milner Evans (Trish) was one of the most delightful things about this movie. If I’m going to retire to a houseboat, then I want it to be next to Trish’s. We get more backstory and booze, because what better way to show “alcoholic” then by constantly nipping on a bottle.

Meanwhile, there’s a subplot of Reece and what’s likely a brain tumor, but since it’s only sort of distracting during really critical moments, it’s probably not worth mentioning. They don’t give him insight, just make him collapse when he’s needed most. There is probably a whole informative info dump on his headaches that never made the final cut, but I’m here to be kind.

The Candy Witch could have been a fabulous revenge killer movie, but it’s not. It’s a vengeful ghost movie with the most corporeal ghost we’ve encountered in a long time which takes the fun out of stories that should have ghosts. I don’t mind when movies break the rules if they establish why those rules are broken. Nightmare on Elm Street (1984) had Freddy, and Freddy could kill you physically in your dreams. Shocker (1989) gave us Pinker who used electricity to possess people before murdering other people. Candy Man (1992) needed to be summoned to this world and killed to perpetuate his myth. Final Destination (2000) made Death a well-designed Rube Goldberg Machine that could adjust on the fly.

The Candy Witch has none of this. She’s a very physical ghost who’s haunting a family years after her death. What summoned her? Has she always killed random people in the neighborhood? Where is she getting all of this candy? Some plot holes in movies can be easily dismissed as an errant edit or a deleted scene no one could make work, but the holes in The Candy Witch only add to an overall disjointed film that feels ploddy and jumbled. The dialogue feels like every line is written by a very proud MFA candidate (which is not nearly the compliment some might think it is). Characters have unexplained revelations and make connections that even the slowest detective could have made. We don’t get to see how those connections are made, because we’re only watching the film and we don’t make these rules. When it ends and it will be jarring and incomplete and not make a lick of sense.

The Candy Witch wants to be more than the sum of its parts, but those parts belong in other movies with a better screenplay. It’s an inconsistent blend of forgettable dialogue strung together by abuse, gaslighting, and a paranormal mystery that isn’t ghostly by any stretch.

The Candy Witch is unrated as it’s a direct-to-VOD release by UnCorked Entertainment and produced by Proportion Productions. If it had its way, it would be rated R for death by chocolate, death by candy floss, eye-gouging, people getting screamed at, people getting stabbed people getting strangled, really awkward sexytimes, and a poke in the junk.

The Candy Witch is streaming now on the following services:
Powered by JustWatch