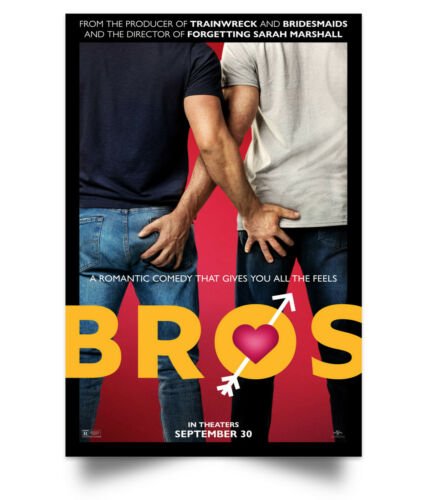 When was the last time you saw a good raunchy comedy in the theater? Not a superhero movie nor an action or adventure film with comedic elements, but a good ole laugh out loud film? You know, the one that you feel in your belly because you’re laughing so hard. Perhaps Good Boys in 2019? The box office result would say otherwise, but sure, maybe. If not that, you have to go back ten years to the outrageous Ted. 10 years! Somewhere between America’s obsession with superhero films and half our country despising the other half, we appear to have lost our sense of humor and, in turn, Hollywood the desire to make us laugh. But leave it to the genius comedic producer Judd Apatow (Knocked Up, The 40-Year Old Virgin) and sometimes partner Nicholas Stoller (Forgetting Sarah Marshall) to bring a film unlike any other before it to the big screen to tickle that forgotten funny bone.

But one important question remains: 20 years after Jack (Kerr Smith) and Ethan (Andy Kaufman) shocked the nation and shared the first gay male kiss on Dawson’s Creek, is America ready for…wait for it…the first gay rom-com?! Perhaps half of the country is, but what about middle America? Let’s hope so because this is a film worth the wait.

Starring and co-written by the loud and brash Billy on the Street comedian Billy Eichner, Bros follows popular podcaster Bobby Leiber (Eichner) as he embarks on running the new Museum of LGBTQ+ History and Culture and what may be the first real romance in his life.

A self-proclaimed 40-year old emotionally unavailable gay cis male, Leiber has made it this far without letting himself fall for another man, instead choosing to move from one Grindr hookup to another. Having sex with “people you don’t like” and guys who are “horny, selfish, and stupid” is easier than being vulnerable. That is until one evening when he meets Aaron (Luke Macfarlane), a hot estate lawyer, at a bar. After Aaron rebuffs Bobby’s flirtation, Bobby can’t get him off his mind and a hilarious end to their first real date, doesn’t help as he only falls deeper for the much more handsome and fit attorney. Like every rom-com ever created, they’re together, then they’re not, and then the final drama of whether they will end up together.

What separates this film from other rom-coms in the last decade or two is the combination of Eichner’s (and Stoller’s) script and Judd Apatow – both the good and the bad of the esteemed producer. For Eichner, whose character’s actions mirror parts of his real life, you can feel how personal this film is to him, including the pain he has gone through as a gay male in America. It’s that passion that makes this film so authentic. As for Apatow, on one hand, few inject humor into the most uncomfortable of situations better than he does. Same goes with his ability to turn a seemingly beautiful scene into one of pure debauchery. Both keep the viewer off-balance but in a movie that features numerous gay kisses and sex, the combination of sincerity, honesty, and comedy may keep even those uncomfortable with such scenarios from not turning away from the screen. But, like nearly all of his films, Apatow tells a story for too long and with a bloated two-ish hour runtime, it simply can’t operate at full cylinders for the entire film.

The sad truth that Bros will not be for everyone is, well, sad because what Apatow, Stoller, and Eichner have done with the film is nothing short of a miracle. Leaving out the fact that they got a major studio to release a film in theaters starring openly gay lead actors and a principal cast made up of primarily LGBTQ+ actors and actresses, they manage to turn what may be initially jarring for some into an enjoyable, heart-warming, and funny story about two people falling in love – gender and sexual orientation simply don’t matter. Gay, straight, bi, or whatever you consider yourself, it’s definitely the funniest film on screen in years.

Bros is streaming now on the following services:
Powered by JustWatch