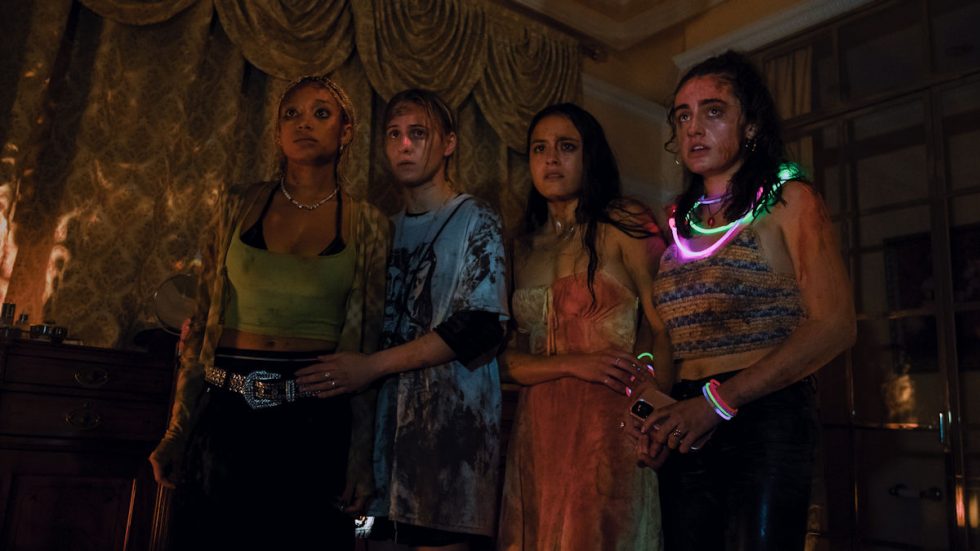 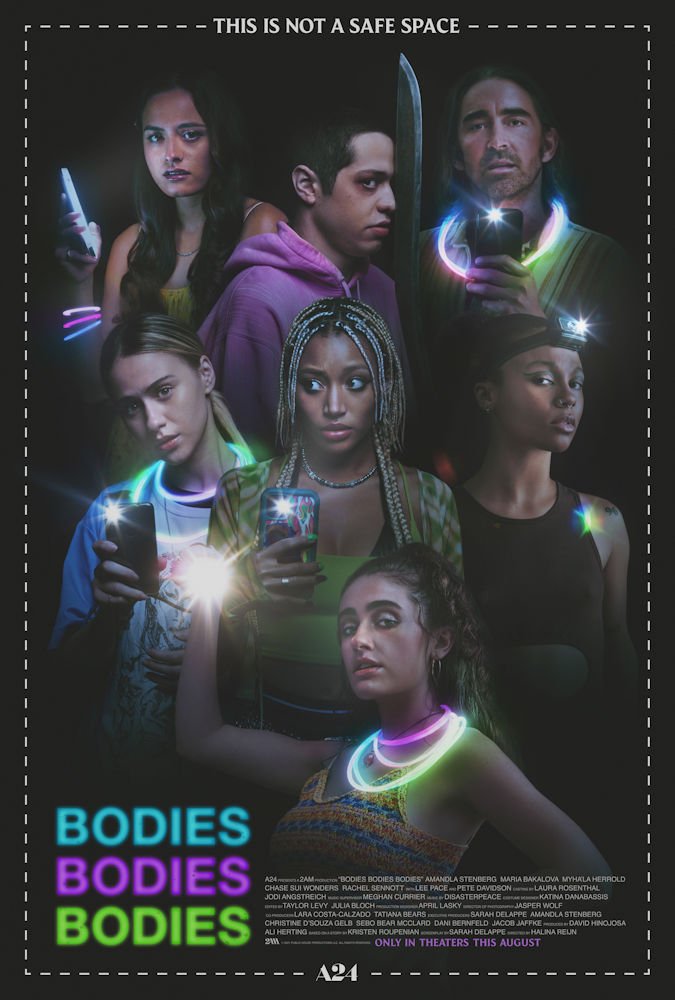 Maybe it’s because I watch more than my share of horror movies, but for a game I’ve never heard of, “Werewolves” is again making the rounds. A24’s latest release, Bodies Bodies Bodies (2022) takes its turn with this novel game of what I can only describe as “Flashlight Clue” to exciting and fatal ends.

With a few variations, “Werewolves” or “Witches” or “Killers” (I dunno, our party game of choice started with an obituary and ended by lifting a classmate off the floor with our fingers) involves drawing lots, running around in the dark, getting tapped by the designated Bad Guy, and then pointing figures at who might be the perpetrator. The game continues until either the killer (or witch or werewolf) is revealed, or everyone is dead. Fun for the whole family! In Bodies Bodies Bodies, prodigal Sophie (Amandla Stenberg) arrives home to a “hurricane party” already in progress, named so because of an impending hurricane. She has returned from rehab, sober giddy, and in love with her newest crush, Bee (Maria Bakalova), a shy girl displaying outsider insecurities and lower-class status. Already at the party and well on the first-class train to Not Sobriety is her stepbrother, David (Pete Davidson), his girlfriend, Emma (Chase Sui Wonders), Alice (Rachel Sennott) and her new boyfriend, Greg (Lee Pace), and Jordan (Myha’la Herrold) who is arrived solo, but likely with an agenda. The unseen Max (Conner O’Malley) has already left the party due to a previous altercation but is due back when he calms down.

(Now before you dismiss this movie as a half-baked Pete Davidson vehicle – hear me out: while this role was clearly made for him, he displays an incredible amount of depth as a rash db who gets what he wants not because of good looks or intelligence, but because of his wealth. Any other actor in this role, and it wouldn’t have worked.)

Once the game is underway and the first victim is revealed, the lights go out for Round 2 and the real game begins. Bodies begin to fall as the realization that someone is playing Bodies Bodies Bodies for real, and there can be only one real winner.

As this is an A24 movie, and they do release decidedly niche movies, Bodies Bodies Bodies stands out not because it’s obviously marketed towards people who are clearly not me, but because it’s smart and tense and I guarantee you won’t figure this one out. It displays the tenuous shallowness of people in general and the lack of solid social bounds that define friendship and loyalty. While also chock full of buzzwords like “gaslighting” and “allyship”, it highlights the lack of basic communication. No one knows how to talk to each other without the mask of TedTalks and blinding inebriation.

I don’t know if this is a new sub-genre of character assembly, Bodies Bodies Bodies is also yet another movie featuring a group of “best friends since whenever” who clearly hate each other. I can’t say you will not find a more loathsome group of friends, but I’d be lying. Last year’s As the Village Sleeps (2021) had a similar, if decidedly rooted supernatural premise, but again assembled “friends” who gathered to get drunk and make out not because they liked each other but because no one else would hang out with them. Whether this is an “iGen” trait of shallow acquaintances masquerading as friends, I don’t know since as an Xer, I don’t bother with people I can’t stand.

Bodies Bodies Bodies feels like a commentary on what happens when you raise a generation on social media, social distancing, Likes and Follows. Secrets are revealed in Act 2 where the characters have a shouting group therapy session at one point and alliances flip in the space of sentences. This is a group who hangs because of the money in their parents’ bank accounts and the availability of party drugs, but because they have nothing in common to devastating results. It is a game of Social Telephone where everyone hears what they want but no one listens, facts are nebulous afterthoughts, and lying in the fact of the truth comes as natural as breathing.