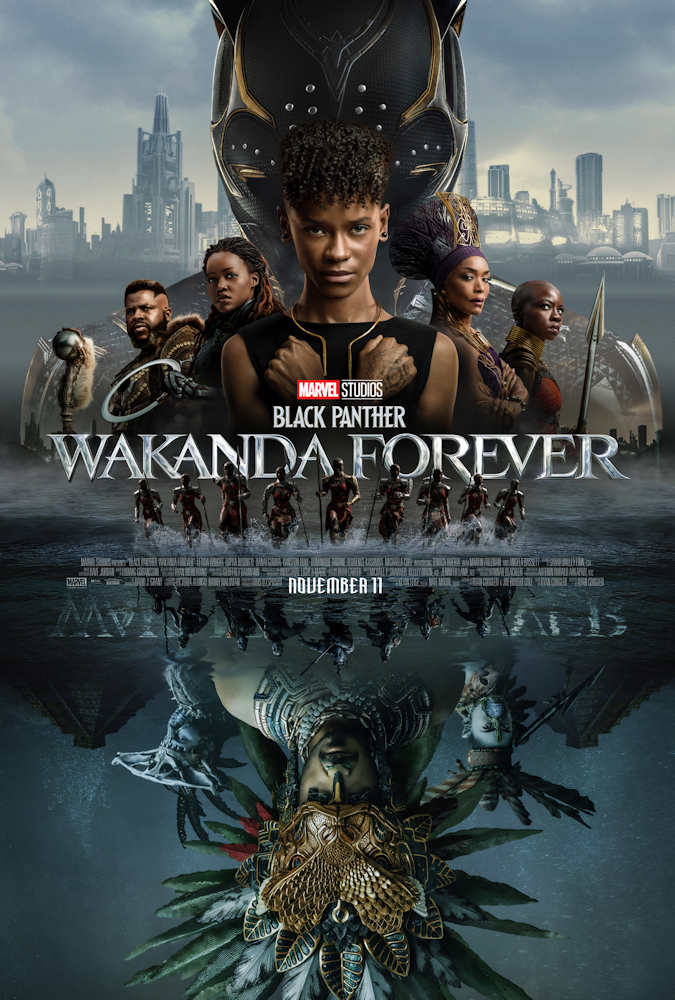 Just when we thought Phase 4 was complete with Doctor Strange and the Multiverse of Madness, along comes Black Panther: Wakanda Forever (2022) to drive home exactly what the MCU has lost and a look at the hard road ahead. Emotions will run high throughout its lengthy runtime of 2:41, so bring your tissues and sip judiciously on your beverage because small bladders may be a casualty.

If you were wondering how they would work in the death of Chadwick Boseman/King T’Challa, nothing is left to wild imagination. We open with the death of King T’Challa, and Shuri (Leticia Wright), despite all of her knowledge and technology, is unable to save him. With the destruction of the Heart-Shaped Herb, there was little chance of saving him after an unspecified illness. There is a glorious Homegoing ceremony for him, but the undeniable scar his death has left on the souls of his people is palpable, and for a dark year, the kingdom of Wakanda is in mourning. It also leaves Wakanda without a champion.

In her grief, Queen Ramonda (Angela Bassett) refuses to be pushed around by the most powerful nations in the world, as governments and privateers scramble to woo and cajole to get their hands on Vibranium, the indestructible and super-conductive material that has both aided in the prosperity of Wakanda, and also kept it hidden. Wakanda becomes more isolated, as she refuses to share their technology and resources to nations that would clearly destroy each other. Ramonda is at her wits end trying to hang on to what she has left.

It was believed Vibranium existed in the tiny kingdom of Wakanda, whose own forces are formidable, but the rumors of a machine that can not only detect Vibranium, but has discovered it in other parts of the world, send the world powers on a search in the deepest parts of the Atlantic Ocean.

Enter now, Namor (Tenoch Huerta Mejía), better known by the even more isolated underwater Talokon kingdom as “Ku’ku’lkán,” the Mayan Feathered Serpent God (I think old-school Marvel fans know a previous version of him as the Sub-Mariner). He can breathe underwater, has wings on his feet, and is singularly, psychopathically interested in protecting his underwater people from anyone who exploit them or their resources. He is fast and strong, and with his exposure to the subaquatic variant of the Heart-Shaped Herb, there is very little that can stop him. Namor wants to forge a pact with Queen Ramonda, which is less of a pact and more of a veiled threat. She will bring him the scientist who can find Vibranium and keep knowledge of his kingdom safe, and he and his formidable army won’t destroy Wakanda and then the rest of the world.

The rest frankly is spoilers and you should have as much fun as I did watching this complicated but moving story unfold. Unlike most MCU properties, like the Avengers, Thor, or Doctor Strange, Black Panther: Wakanda Forever isn’t interested in filling the movie with easter eggs, fan service, or jokes. Black Panther, though a part of the MCU, is treated as its own separate property with little interference from any other superhero, and that’s by design. They’ve thrived on their own while avoiding interference and poaching and are determined to keep it that way. The two powerful nations, Wakanda and Talokan exist by shunning the modern world, maintaining their customs and autonomy, while also hoarding minerals and technology that make them a threat. You can see where this is heading.

You may not be ready for everything that Black Panther is going to throw at you. It is unapologetically Black, African, colorful, and poignant. Throughout Phase 4 we’ve dealt with the loss of identity, loved ones, families, opportunities, and homeworlds. There is all of that, with a deeper sense of loss as Ramonda, Shuri, Okoye and the four tribes of Wakanda deal with the unfillable void their king and protector has left. Ramonda is adrift in a sea of doubt ad no one takes her seriously as a ruler. Shuri has a crisis of faith when she believes the ancestors ignored her pleas for a reprieve for her brother. While fighting Namor’s warriors, Okoye loses something that can never be replaced, and as a consequence, loses her entire identity.

This is seriously heavy stuff, with emotional shades of the familial generational trauma of Shang-Chi and the Ten Rings (2021) and Stark’s funeral in Avengers: Endgame (2019). Director Ryan Coogler has had two years to plan the funeral we never got to attend, to honor a king played by an actor we lost too soon. There is no CGI T’Challa (thank gawd), and the memories are kept to tasteful flashes of his smile and nobility. We’re invited in to mourn what could have been while getting a glimpse of the troubles to come. I don’t know if this action-packed tribute could have been handled any better, because it feels like a labor of love, not just a superhero movie.

Black Panther: Wakanda Forever (2022) is rated PG-13 for two funerals (gasp), superhero violence, people getting slammed into walls, cars, bridges, and into the ocean, people run through with spears, people drowned, and a lot of tears.

Stick around for the single mid-credits scene that is significant to the future of the Black Panther franchise.