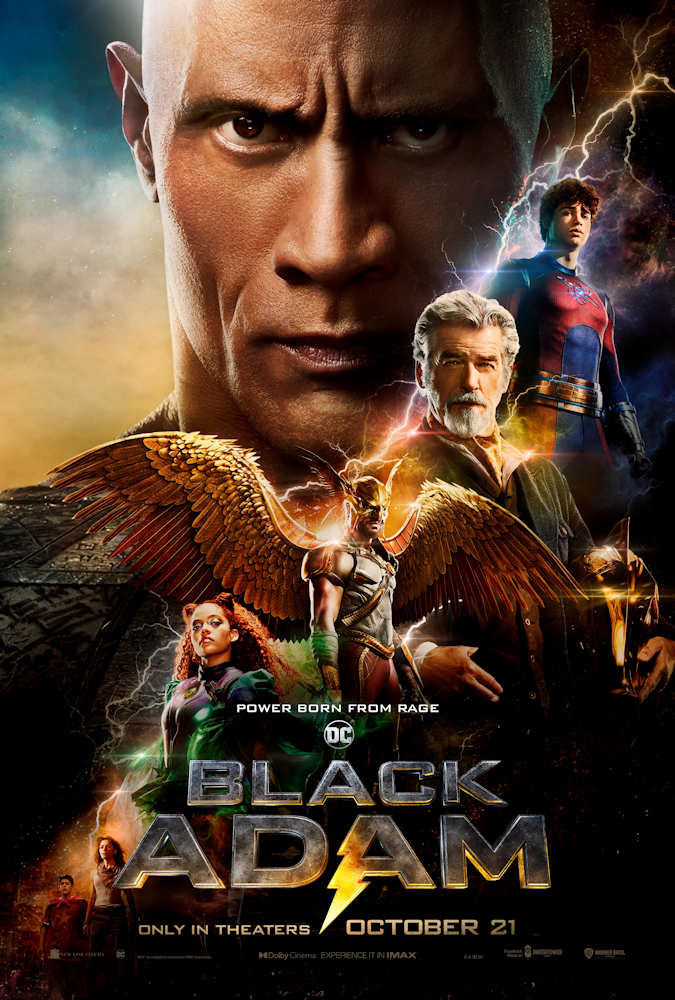 I generally like superhero movies. I appreciate the escapism, the nonsense. I don’t even mind familiar. Black Adam (2022) not only feels familiar, but it also borders on derivative and that doesn’t bode well for DC.

In the northern African country of Kahndaq, treasurer hunter Adrianna (Sarah Shahi) searches for the ancient Crown of Sabbac, rumored to give the bearer great power. While fleeing for her life, she utters the incantation that resurrects Black Adam (Dwayne Johnson) from his 5,000-year slumber. Adrianna’s son Amon (Bodhi Sabongui) believes Black Adam is there to be a savior of Kahndag from the last 27 years of oppression by ruthless mercenaries calling themselves Intergang. Amon spends a lot of time on his skateboard teaching Black Adam catchphrases.

So, everyone is fighting for the magic crown, the JSA is fighting the people of Kahndag for the right to kidnap their chosen savior, and Hawkman and Black Adam have frequent staredowns. Meanwhile, Kahndag watches helplessly as more of its cultural artifacts destroyed by people who are claiming to help. I’m sure this is a statement about how developed countries do more damage than good under the guise of liberation, but there’s way too much going on in this movie to pretend it also has a political statement.

And there is a lot going on. Just when you think the story is over, there’s easily another 40 minutes to go, so this two-hour movie feels like two-and-a-half hours. It’s around the end of the second act when the big climactic scene should be getting underway, when another plot point or two get inserted and suddenly we have zombies.

I’m not making that up.

Setting aside the jumble of story issues, we have a cast that feels tapped solely for name recognition and then slid into colorful costumes. We forgive a lot of Dwayne Johnson’s comedies, because frankly, the man is so charming and personable. This is a large man with a large personality and his charisma carries a lot of unfortunate movies into watchable comedies. Because Black Adam is such an angry anti-hero, Johnson’s personality is dialed all the way down to zero. Black Adam could have been a completely animated Vocaloid and we wouldn’t have known the difference. It’s as if Johnson watched the first Terminator (1984) and decided he was going to channel Arnold Schwarzenegger exclusively.

I would watch Pierce Brosnan smooth his suit and straighten his tie for two hours, and to the studio’s credit, he actually gets a little superhero action in, but dispensing fatherly advice is not why I watch him on screen. Noah Centineo and Quintessa Swindell feel like Gen Z afterthoughts and are wasted as Atom Smasher and Cyclone since neither are terribly effective – he gets really big while wearing his uncle’s suit and she’s really smart and makes strong winds. Yet, none of those abilities are helpful against rampaging demi-gods. It’s a poor reflection of Hawkman’s skills as a strategist, but it’s only one of a few things that aren’t logical about Black Adam.

It’s a DC movie with solid DC canon backing it up, but Marvel has so completely dominated the superhero genre, everything about Black Adam feels like Marvel fanfiction. We see Hawkman and think Falcon and a knock-off Iron Man. We see Atom Smasher, and think Ant-Man with a generous helping of Spider-Man’s awkwardness. We see Doctor Fate and think Doctor Strange with a sprinkling of Professor X. We see Cyclone and think Rogue and neat cosplay. Kahndaq feels like Wakanda, with veins of the mythical element Eternium running through its hills instead of Vibranium. It feels too familiar to really enjoy it.

Bear with me because I’m not a comic book reader so I don’t obsessively know the canon, but we have had 24 years of Marvel Cinematic Universe movies, and even a few DC films that didn’t completely tank in that span. We’re all familiar with the Justice League and I can even do a quick search on its precursor, the Justice Society of America, consisting of Hawkman, Atom, Doctor Fate, and a few others. And just as easily in that same search, I see Waller never worked with the Justice Society of America. This is a DC Comics multi-deck player set to Random.

For all of the clever dialogue and twists, Black Adam is very self-aware. It’s a cinematic universe that doesn’t want to be compared to its competition, yet spends a lot of time copying that competition. With the exception of Shazam (2019) and Birds of Prey (2020), DC is striking out with both the one-offs and the ensemble pieces. Thank goodness it’s not up to me to salvage it, but if this is the best they’ve got, maybe hold out for Shazam! Fury of the Gods in 2023. It’s okay for a sequel to be derivative of itself.

Stick around for one mid-credit scene which feels more like a threat.

Black Adam is streaming now on the following services:
Powered by JustWatch