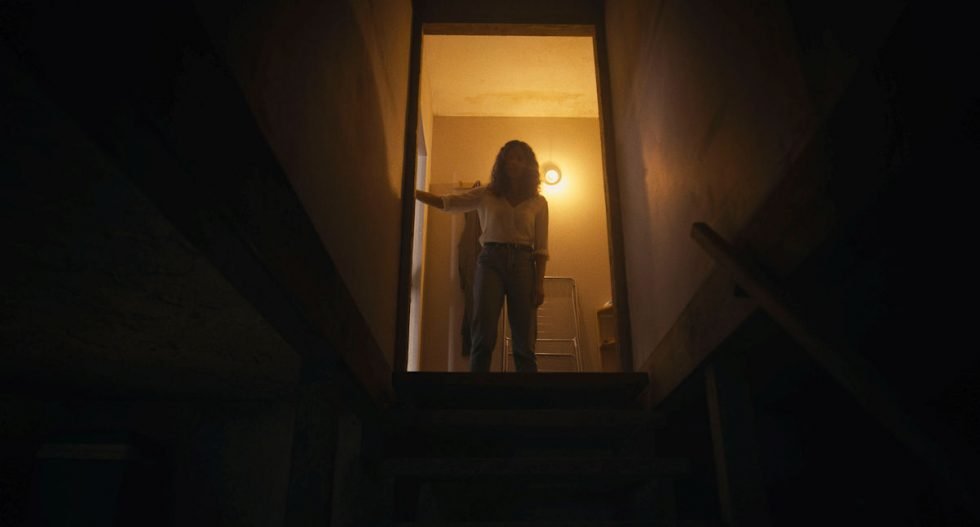 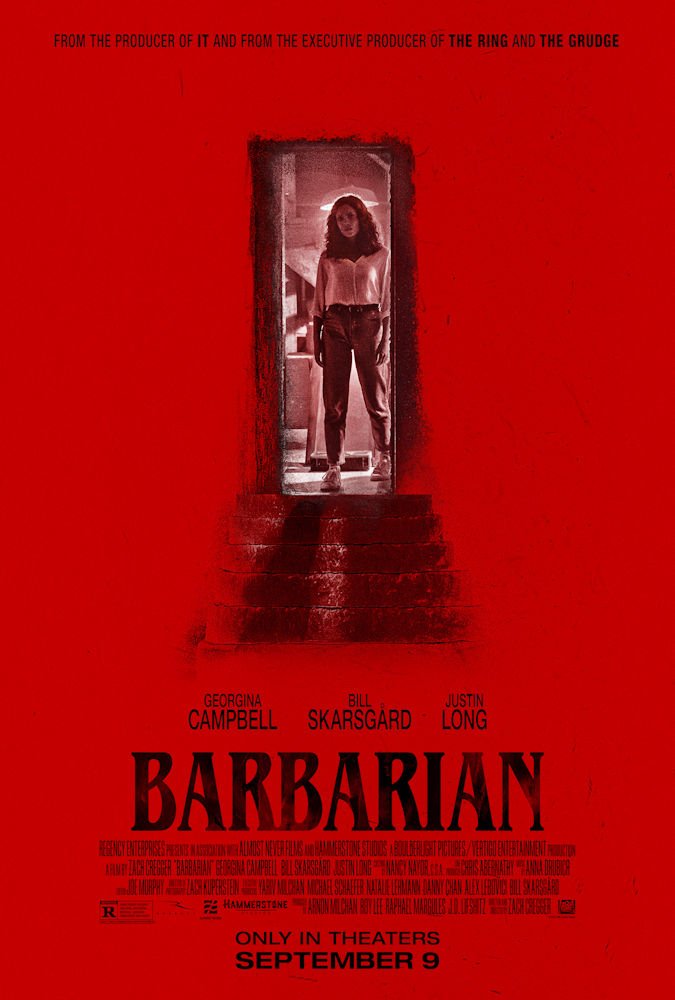 All horror fans are a little jaded when it comes to new releases. We spend a lot of time during a movie trying to pick apart the plot or puzzle out the twist because there’s very little we haven’t seen before. Barbarian (2022) has decided that you can certainly try, but you aren’t figuring this one out.

Tess (Georgina Campbell) has traveled to Detroit for a job interview, and potentially a clean break. We don’t learn a lot about Tess and her previous troubles, but they’re enough to make her want to pack up and take a job in Detroit. I live here and I know that’s a drastic step. Upon arriving late during a storm, she discovers Keith (Bill Skarsgård) already settled in her B&B rental. All of her instincts are telling her to leave, but the weather is bad, what few hotels the City has are booked, and she has nowhere else to go. The house is bright and clean, comfortable for a last resort, and Keith is friendly enough. He’s a nice guy, aware of the imbalance of social power in this situation, and tries to make Tess feel comfortable, but even nice guys can be intimidating.  Tess does everything right, from refusing drinks she didn’t prepare to locking her bedroom door at night. Tess is going to make it.

When she explores the house, she discovers a secret room behind a wall. There is also what we natives lovingly call a Michigan Basement, a subfloor dug from an existing foundation, and there is more to 467 Barbary than a double-booked B&B rental.

Justin Long is AJ Gilbride, a Hollywood director facing his very own #MeToo reckoning. He needs to liquidate what little property he owns in Detroit because selling his actual belongings is a step too far. This is as close to deep insight into AJ’s psyche as we’ll get, but it’s more than enough. His desperate need brings him to the little B&B on Barbary. There are things about AJ we don’t like, and as more of his personality is revealed, the least objectionable thing about him is his very punchable face

Like Bodies Bodies Bodies (2022), Barbarian is the sum of our collective horror experiences with tired and expected tropes tossed aside in favor of modern twists. This is gleeful horror, with characters acting in their own best interests, even though they know it’s not the right choice. This is a far cry from characters making stupid decisions because it’s a core part of their personality and it advances a paper-thin plot. The only bad decision these characters made was booking the stay and it’s the one sensible decision made with eyes wide open that they can’t take back. Everything that follows creates a bad circumstance that branches into at least two more poor circumstances. Stir in a little empathy and unresolved trauma, and humans become very unpredictable, very fragile animals.

Barbarian isn’t going to ring true with a few fans. It follows a 1-2-3-2 format in terms of storytelling, and the abrupt cuts can leave a viewer disoriented. Explanations are few and far between, but this is a movie where explanations would completely take away from the terror. Ruin porn fans will delight in the movie’s setting, Brightmoor Neighborhood, notorious for its lack of residents and overabundance of burned-out shells and naked decay. It’s interesting to note, however, that while Barbarian is set in Detroit and some scenes were filmed in the City, the “neighborhood” is a fabrication in Bulgaria. It absolutely doesn’t take away from the shocking neglect.

I wouldn’t call Barbarian “supernatural” by any stretch but I can see where some are getting that description. This is a horror movie after all, but the chuckles are balanced well with the scares. Screen-writer-director Zach Cregger provides relatable interactions and the absurdities of everyday life, with a healthy dash of unexpected terror. This isn’t a movie given to running and screaming, but the tension is doled out in healthy handfuls.

Tiptoeing around spoilers, Barbarian isn’t going to be what audiences are expecting at all, and by the end of the first act, it’s brand-new territory. Some viewers may think the cuts and twists are a cheat, but nothing about this movie promises comfort or security in the familiar. Set aside preconceived notions based on trailers or posters and enter 467 Barbary with an open mind and a hand on your keys.

Barbarian is streaming now on the following services:
Powered by JustWatch