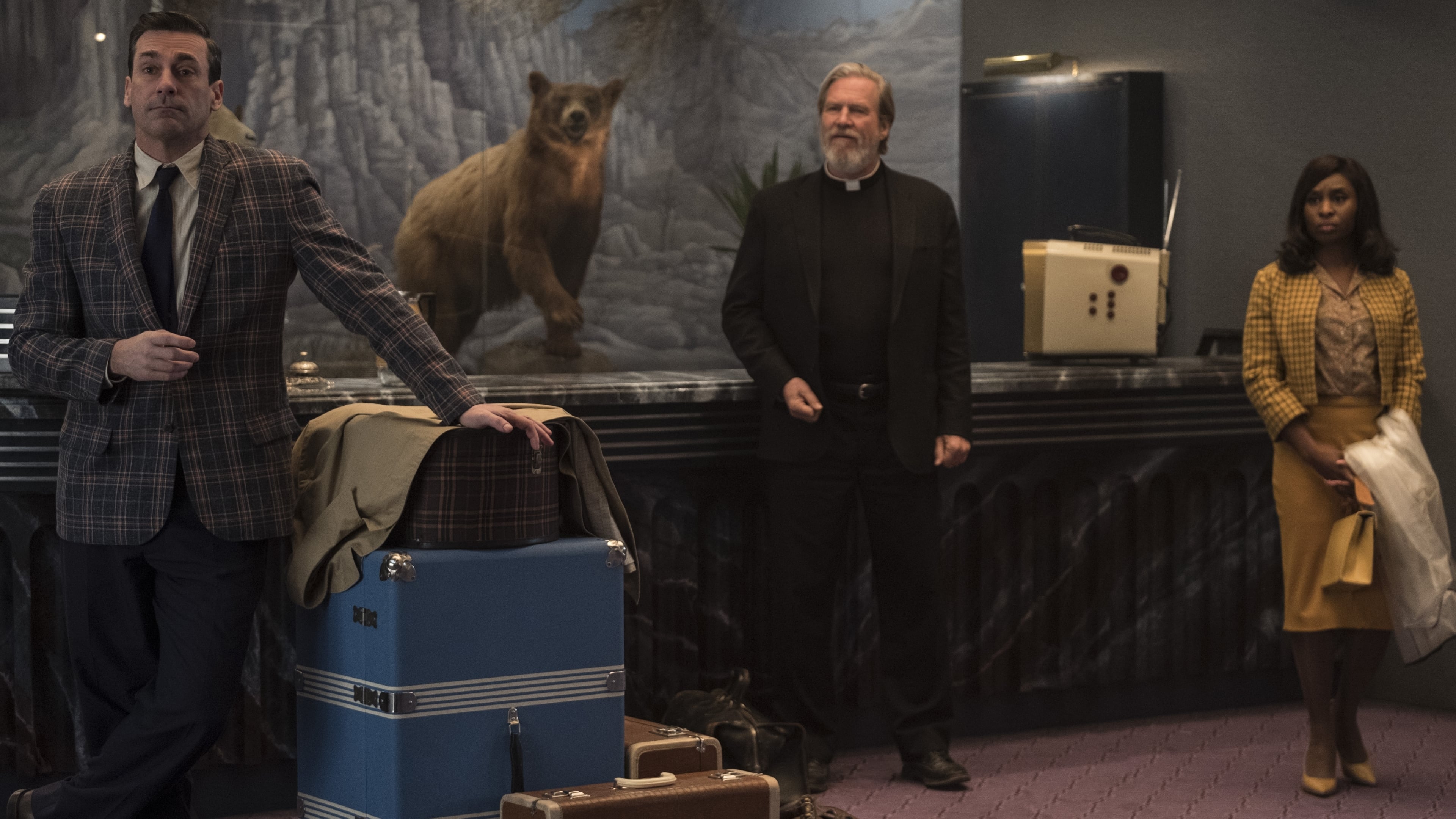 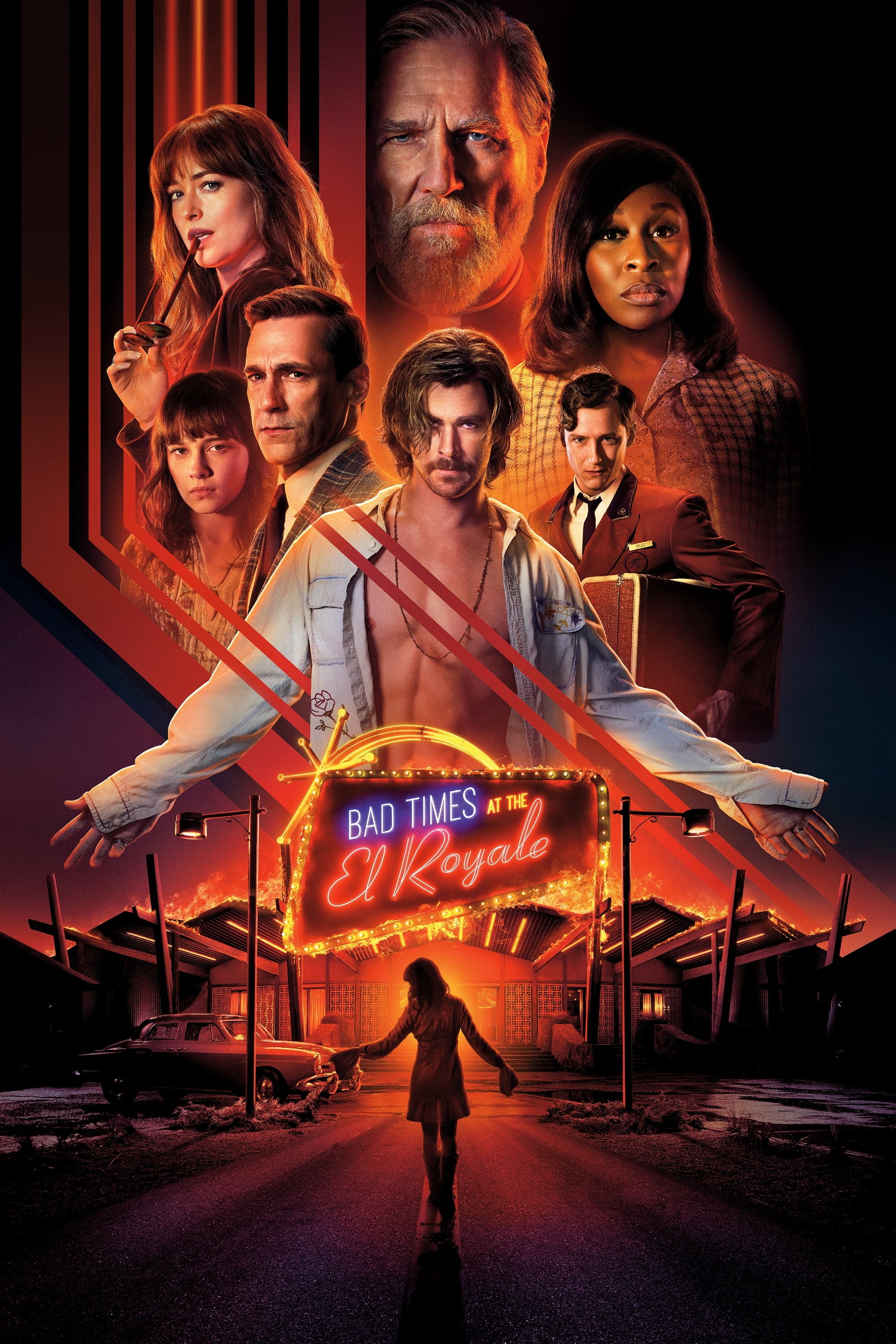 Bad Times at the El Royale

The premise for Bad Times at the El Royale (2018) is promising – strangers converge for a night of fate, sacrifice, and redemption. The reality is a convoluted, overly-long series of one-act sketches that fail to ignite on any level.

I’ll warn you – if you’re like me, you might think Bad Times at the El Royale will play out like Identity (2003) or Reeker (2005) or even Devil (2010). In fact, we’re all but promised it in the little speech Miles (Lewis Pillman) the bellhop/ concierge, when the guests have to choose their rooms. We want to believe the side they choose decides their ultimate fate – warmth and sunshine (California), or hope and opportunity (Nevada). That sounds like a metaphor for extremes of the Afterlife, and I was all in. I wanted to know how everyone had chosen that gimmicky motor inn straddling the border of Nevada and California and I wanted people to make some hard choices. A priest (HJeff Bridges), a salesman (Jon Hamm), a singer (Cynthia Erivo), and a woman (Dakota Johnson)  with more secrets than manners spend the night in an all but forgotten motel that feels as deep and glamorous as a Marylyn Monroe cardboard cutout.

5 stories (and we’re counting concierge Miles, here) intersecting on one night determining the fates of all involved.

That’s the movie I wanted to see.

Instead, I got 4 really long stories – and Miles’s backstory (#5) should be IT’S OWN DANG MOVIE – about 4 people running to or from something who just happen to be right there at that moment. It’s as exciting as the free continental breakfast at any Days Inn when you and another guest reach for the same bagel. There are some unexpected moments and some laughs, but overall, you feel every moment of its 141-minute running time. When we’re finally introduced to Billy Lee (Chris Hemsworth), though his and Ruth’s (Cailee Spaeny) story has been running throughout the movie, you’re a little sad that there is yet ANOTHER  character we have to get to know.

And we don’t want to.

Chris Hemsworth takes his shirt off, but lately, when doesn’t he. The mystery is gone, son.

It’s a crime thriller in the sense that crimes have been and are being committed, but you stop caring about the mystery because you can literally hear director, Drew Goddard, say, “oh, but let me tell you about this one part first” and you just want to go pee.  When they should be coalescing into something that feels like the redemptive climax, the whole focus shifts and you regret deeply the large Iccee you had with your popcorn. Finally, it just sort of ends, and you realize you’ve taken this long strange trip and there should have been a shortcut and your Trip Advisor review is going to burn so hard.

There’s a lot going on but none of it pans out into anything interesting, and for all of the clever little twists none of it was enough to sustain 2 hours and 21 minutes. The risks that could have been taken with this script were abandoned and what we are left with is a little too commonplace for a setting as dark and enigmatic as the El Royale.

It’s about 20 minutes too long and when it’s all over and done, it’s very unsatisfying. Don’t get me wrong, I’m not mad I didn’t get the movie I wanted to see – I’m mad because the movie I got was this one.

Bad Times at the El Royale (2018) is Rated R for swears, people getting shot, people getting hit with bottles, people using drugs, Chris Hemsworth’s brief bare bum, and the existential emptiness that comes from movies with unsatisfactory endings.

Bad Times at the El Royale is streaming now on the following services:
Powered by JustWatch