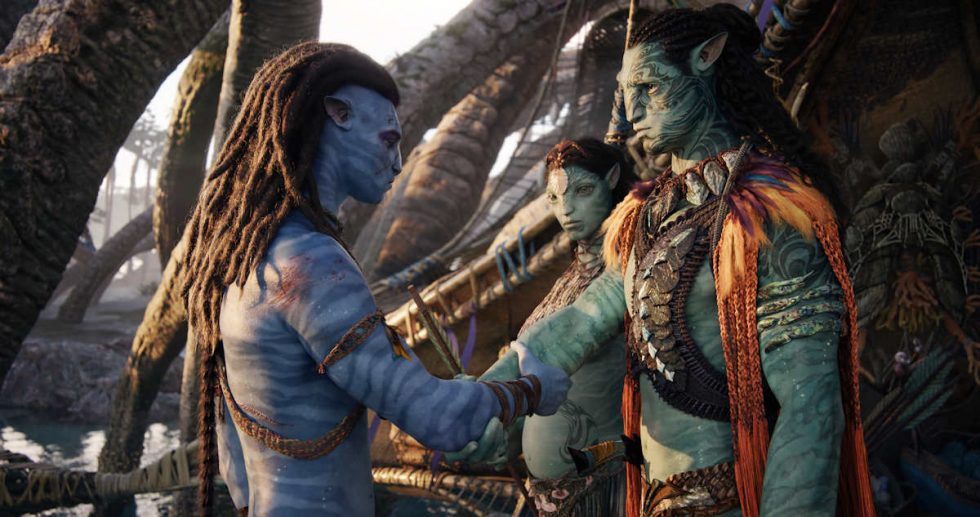 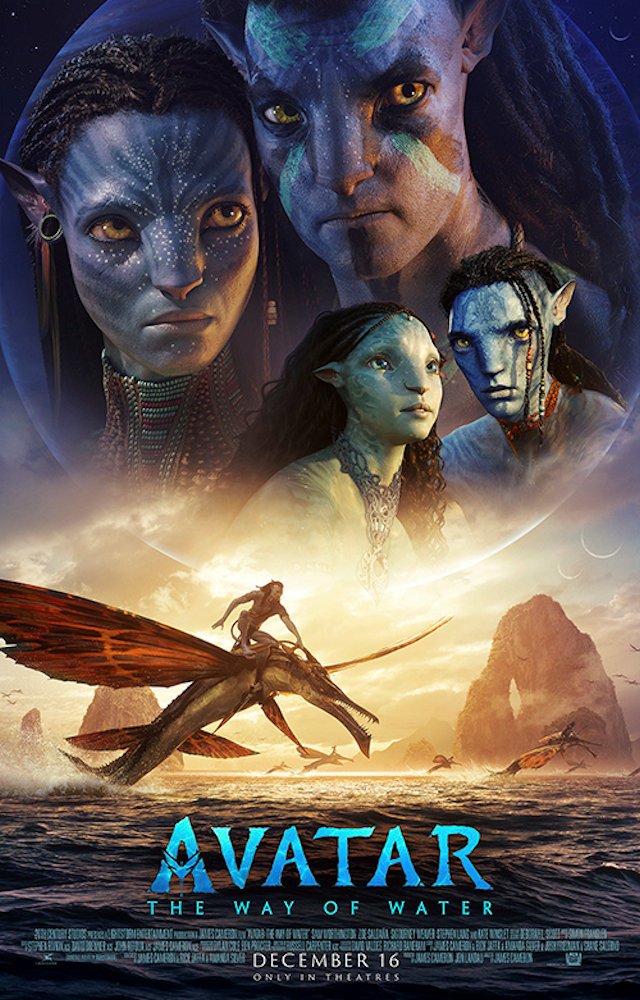 Avatar: The Way of Water

Maybe it’s because I very recently watched Avatar (2009) that it was fresh in my mind, but Avatar: The Way of Water (2022) not only isn’t offering anything new; it’s the same story, just a half hour longer.

On Pandora, the world has moved on. Jake Sully, in his fully functioning organic avatar body, and Neytiri have raised a family of four and settled into the simple life of the Na’vi Omaticaya Tribe. Their children are Na’vi/human versions of teenagers: rebellious, hard-headed, and prone to trouble. They run with an orphaned human named Spider (Jack Champion), left behind after the humans left Pandora, who is more like a pet than a friend. They even call him “Monkey Boy”, which I’m sure isn’t racist at all.

The Sully family comes under attack from more Sky People who have returned to make Pandora the new home for humans since Earth is all used up. We know Earth/Sky People are bad because their machines are still belching black smoke and they set fire to everything they encounter. I’m sure this is supposed to be some commentary on the “civilized” humans taming the natives, but it’s so laughable and ham-handed, the embarrassment level is set to cringe. Realizing he’s a target, Jake packs up his family and they flee across the ocean to endanger the lives of the Metkayina, the Water Tribe, led by Tonowari (Cliff Curtis) and Ronal (Kate Winslet). These ocean-adjacent Na’vi are air-breathing but have builds made for water – larger upper chests, and subtle fins on their arms and tail.

Col. Quaritch (Stephen Lang – SURPRISE!), an old enemy, is back with a literal deus ex machina, and he’s irrationally angry. At the heart of his mission is a pointless vendetta against Jake Sully, like so pointless do we really believe Earth would fund a mission to send the military back to kill one man? No, no they wouldn’t. I’m sure they all saw The Terminator (1984) and how well that worked out. I don’t know what Cameron has against the military-industrial complex but I wish he’d go to therapy and work it out in a smash room.

Call me old school, because I’m still a firm believer in Roddenberry’s Trekkian Prime Directive. Cameron obviously doesn’t because in Quaritch’s search for Jake, he torches a few dozen villages and smacks around a few indigenous people. All to find one man, who frankly forgot he existed.

It is this largely inhumane section of Avatar: The Way of Water I have a problem with. It depicts over-the-top cruelty that is beyond belief, and it’s not only difficult to watch, but it disconnects you from the story. And it gets worse, so try not to get attached to anything.

Colonialism is superbad. Check. But you know what is worse? That tribalism is so homogenized, it begins and ends with skin color and some extra fingers (plot hole). Sully and his family travel across the ocean to hide among the Metkayina, but they all speak the same language as if to say, once we look past the color of our skin, we’re all the same (jfc)! Racism solved – great game, everyone!

Furthering James Cameron’s treatise on racial harmony, the Na’vi are othered in their own movie with borrowed hair, war cries, mournful ululations, and even the exaggerated facial contortions of intimidation. Every indigenous culture Cameron could be bothered to remember is represented in these two tribes. May as well call it Avatar: Kumbaya.

And there are supposed to be two more of these? Maybe spare a few million on a script that doesn’t feel like the cringiest parts of his blockbusters with a sprinkling of his kids’ arguments and half-read history articles on colonization thrown in for authenticity.

I’m not saying James Cameron shouldn’t be lauded for showcasing exciting technology, but CGI in movies, while impressive, isn’t the gee-wow spectacle it used to be. It’s still motion capture, it’s still largely done on a computer and it’s so commonplace and used so extensively, especially in television, we barely notice it anymore. Avatar: The Way of Water’s story was built around the graphics, which is a shame because it would have paired well with a compelling story. Instead, it’s the same plot from 2009 – the same struggle to fit in, same rebellion, same bad guys. We have the same cast: Sam Worthington, Zoe Saldana, Stephen Lange, and Sigourney Weaver. It’s underwhelming and disappointing. There are free story generators on the internet that could spit out a better plot.

Avatar: The Way of Water is pretty, I’m absolutely not disputing that, but does your bladder deserve to be tortured in a movie theater? No. Do you need the 3-D Dolby experience? Newp. I mean, you do you and it’s your half-pound of dimes, but a 3D experience is perfect for a 7-minute amusement park ride, but not a 3-hour movie and not in IMAX. It’s loud, eye-watering, and very uncomfortable. Avatar: The Way of Water wallows in intense navel-gazing to show off its gorgeous CGI – yes James, we see the fishies – but all of that water and flying are a distraction to keep you from seeing this is a $250,000,000 film with a recycled script, and you and your bladder deserve better.

If you’re going, pick a seat closest to the aisle, and don’t worry about rushing back. Chances are you won’t miss a thing.

Avatar: The Way of Water (2022) is rated PG-13 for swears, native nudity (which I guess doesn’t matter because alien boobs aren’t real), people getting shot with bullets and arrows, people being eaten by large creatures, people being crushed and drowned, a few deaths, and pointless, infuriating animal cruelty.

Avatar: The Way of Water is streaming now on the following services:
Powered by JustWatch