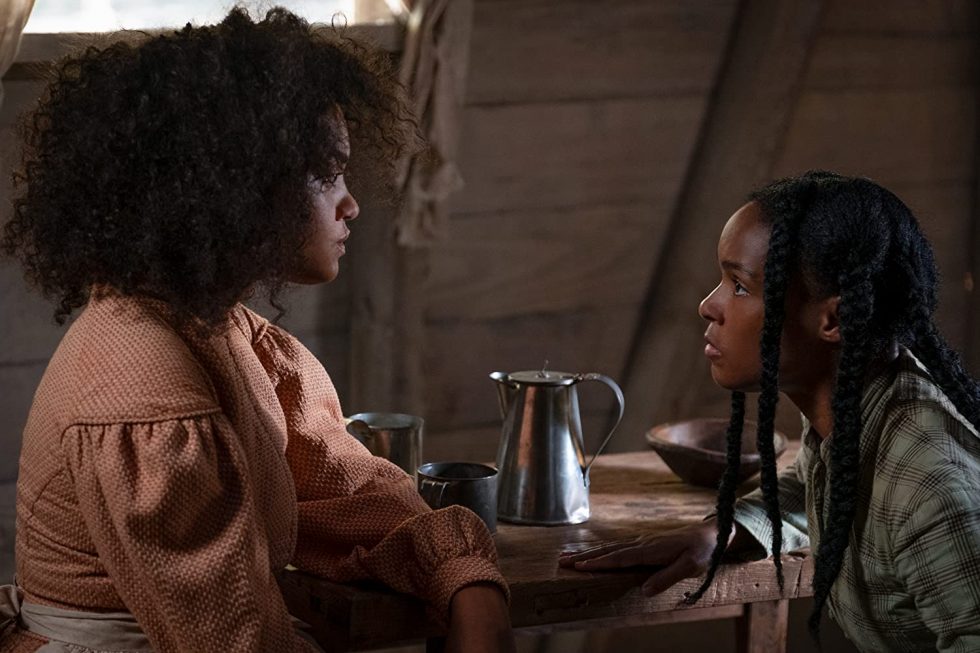 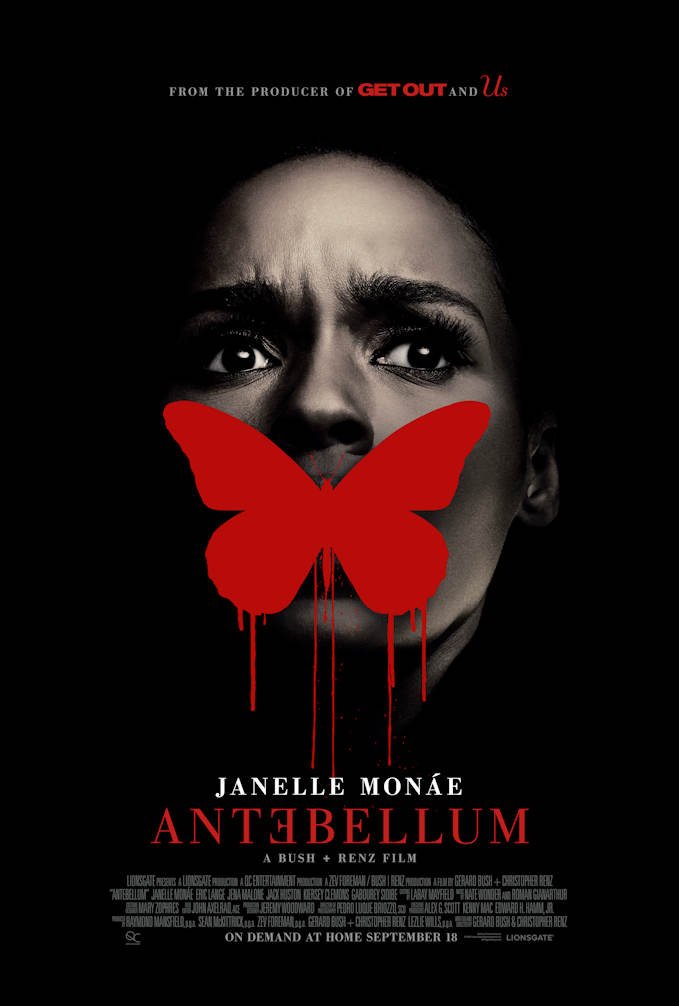 Forget for a moment any synopsis of Antebellum (2020), which I try to avoid because they’re almost never in line with the movie being presented. They’re either written by a marketing person based on an elevator pitch, or they’re written by the writer/director, and regardless of what they wanted their vision to be, that’s not what’s on screen. You will not only be woefully ill-prepared for what comes, but you might be a little pissed at the bait and switch.

Eden (Janelle Monáe) is an incorrigible slave on a “rehabilitation” plantation. The plantation is Confederate-occupied, as denoted by the Battle Flag that rises above the fields. Soldiers march the property, slaves scurry about in silence, some soldiers dole out instant punishment, which sits perfectly fine with Elizabeth (Jena Malone), mistress of the plantation, who’s proud to give all of the slave arrivals their new identities. At the opening of Antebellum, Eden is forcibly returned from her latest escape attempt and then brutally punished when she refuses to submit to her new name. In the field picking cotton, she’s cowed and more submissive, trying to keep her fellow hostages (what is slavery but a work/study-style hostage situation) calm, reminding them to not talk and to remain obedient. Chronically disobedient slaves are tortured, murdered, and sent to the Shed for cremation as a lesson to the others. Eden’s closest “friends” are Eli (Tongayi Chirisa) and plantation newcomer Julia (Kiersey Clemons), though she goes to great lengths to not be seen speaking with them. Eden, Julia, and Eli, along with other slaves are subjected to long days of field work, brutality from over-seer soldiers, and in Eden’s case, “special” attention by her Master (Eric Lang). 35-minutes in, we get some present-day context, and Eden is actually Veronica, a self-help empowerment guru with a Ph.D., a loving husband, and a cute as a button daughter. She is Black and successful, but in spite of her successes, runs into micro-aggressions in her everyday life, like interviews and making dinner reservations. After an evening out with friends, Veronica is violently kidnapped and goes from a successful woman to a barely domesticated slave. She endures as much as she can waiting for her moment to escape and find her way home.

Antebellum is … heavy-handed, to put it in the politest of terms. Depending on how you fall (and how sensitive you are to being shown rather stark truths that come with being Black in America), you’ll either feel for Veronica/Eden or rage against the movie as “anti-white”. It’s not anti-white, by the way, and anyone who doesn’t believe that parts of Antebellum are a wet dream of some alt-right/nationalist groups is deliberately ignorant.

One problem with Antebellum and this is always a problem with movies that want to portray the horrific realities (as seen through a Hollywood lens) of slavery, is what I call “lynch porn.” Traumatic portrayals of brutality don’t add to the story so much create a reach for the genre category “horror”. Do we need to see people branded? No. Do we need to see slaves shot while running, or dragged to their deaths? No. Are the filmmakers pandering to an audience that needs to see this level of brutality to justify the actions of its characters? Oh, yes. If you think you need to see that in order to feel aligned or sympathy with a Black character, you may need to see a mental health professional.

Another issue for me, was not with the micro-aggressions inflicted upon Veronica, but the over-the-top reactions by her friend, Dawn (Gabourey Sidibe). There’s aggressive, and then there’s just rude, and I don’t mean the comical two-snaps rude as seen by many stereotypical Black or LGBTQ+ sidekicks. I mean just ill-mannered, raised by trash rude. Dawn treats every interaction like a personal affront and responds with insults, bad reads, sarcasm that just comes off as boorish. It’s not even chuckle-worthy. Perhaps she’s meant to be the Yang to Veronica’s Ying, but then I think Veronica needs to work on some assertive qualities to reign her friend in. Maybe in a previous draft, Dawn was the Gay sidekick, but let’s be serious, people being catty just isn’t entertaining like it used to be.

So, what am I saying? I’m saying Antebellum is not the movie it could have been, whether it was due to the strange editing choices or the off-putting characters on both sides. It takes entirely too long to get to the horror part of a horror/psychological horror. Lynch porn isn’t horror and frankly, it’s traumatic to watch. It’s not new or edgy and its very inclusion sacrifices a lot of what could have been the actual story. We don’t see Eden’s own rebellion until the film is practically over when it could have been building up for 40 minutes, which means we only have the brief five minutes of loving Mom/Wife Veronica as the basis of a character that’s carrying the entire movie. Especially when she has trash friends.

There I said it.

I was really looking forward to Antebellum, but in the end, it’s a very disappointing debut feature outing for writers/directors Gerard Bush and Christopher Renz. Too much focus on the shock and not enough on plot or story might be fine for short films, but I shouldn’t be checking my watch 50 minutes in during one of the most anticipated films of 2020. If this is the kind of social commentary filmmakers are gleaning from Get Out (2017), the point was missed. By a mile.

I suppose the most disappointing thing about Antebellum is we’re pretty sure we know what could have been, and considering the hype surrounding the wait, we know it could have been so much better.

Antebellum (2020) is rated R for swears (though thankfully never the N-word), people being beaten, people being branded, rape, people being dragged, people being run through with swords, people burned alive, horrific slavery situations, and the general Black Trauma I’m really tired of seeing.

Antebellum is streaming now on the following services:
Powered by JustWatch