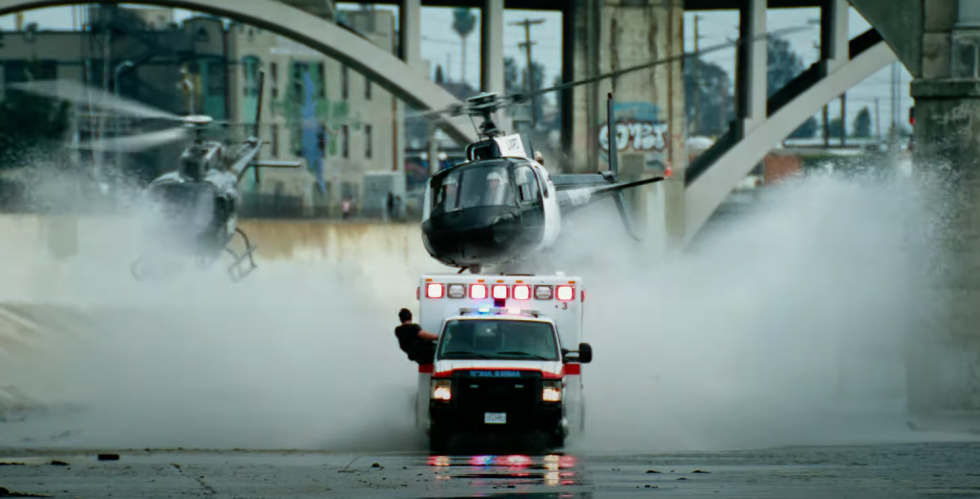 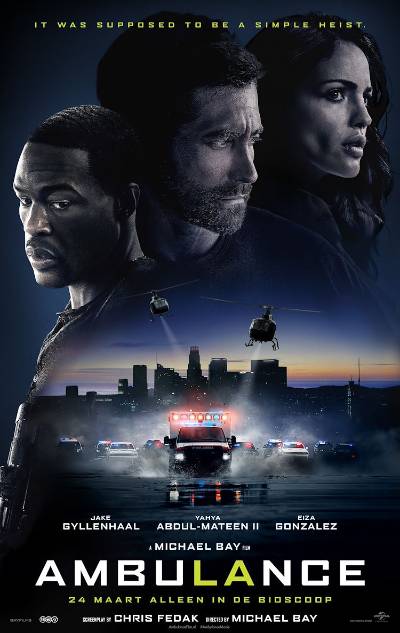 It’s been a few years since Michael Bay treated America to one of his big action, big thrills films — and with theaters open wide again, there couldn’t be a better time for some brain-free fun. Then again, that depends on what you think about Bay.

Let’s be honest, when you hear Michael Bay’s name as either the director or producer of a film, you’re not expecting Shakespeare or Kafka. Nope, when it comes to Bay you think big action, big explosions, and often big fun. With his newest release Ambulance he succeeds on the first two but fails miserably on the third mostly due to a severely bloated 2 hour, 16-minute runtime. A remake of the 2005 Danish film by the same name (or as it’s pronounced there Ambulancen), Bay certainly makes his film bigger than the original — in this case 70% bigger, resulting in an extra 56 minutes of unneeded plot!

The film perhaps best succeeds in introducing the key characters from the get-go. There’s Cam (Eiza González), the supremely talented yet hard-ass EMT with a “pick ’em up, drop them off, and forget it” mentality. Will Sharp (Yahya Abdul-Mateen II), is a respectful family man and veteran who served in Afghanistan but has struggled with employment since coming home and is fighting to get help with experimental treatment for his cancer-ridden wife. Finally, there’s Will’s adoptive brother and career criminal, Danny (Jake Gyllenhaal).

In need of money for his wife’s surgery, Will pays Danny a visit and it’s there that Danny guilts him into partaking in a $32 million bank heist made up of the most cartoon-written characters — including a large oaf and a Birkenstock-wearing dolt. One could say that Bay is foreshadowing the disaster that is about to happen but Bay’s films have never been considered to be that intelligent. Shockingly all goes wrong and the Sharp brothers end up hijacking an ambulance containing a seriously injured police officer. If bank robbery weren’t bad enough, holding a cop and EMT hostage certainly isn’t going to help.

On the run from the LAPD and FBI for nearly two hours, there’s barely a second of relief — in terms of action, it’s one of the most action-packed films in years. Now, if only Bay had not relied so heavily on handheld cameras and drones seemingly operated by kindergartners, it wouldn’t feel like such a chaotic and schizophrenic mess. Even the least queasy of folks will struggle with the near seizure-inducing camera work.

But the disaster of this film doesn’t lay only on Bay’s shoulders — blame also falls on screenwriter Chris Fedak for the mess that is Ambulance. But then again that shouldn’t come as a surprise from a writer whose credits include mostly mediocre (at best) TV series save for the cult-followed Chuck. Whether it’s the tongue-in-cheek jokes about Bad Boys or The Rock (two older Bay films) that never land, sight gags like the use of the police captain’s oversized dog, or just-not-funny jokes like “it’s cashmere” made by Danny after being sprayed by a fire extinguisher, the lack of humor in an action film this long is something rarely seen before. When you look at some of the best action films, it’s the one liners and humor that often put it over the top. Here there are none. If it weren’t for a quick, funny tribute to Christopher Cross’s hit song “Sailing” the film would literally be completely devoid of any laughs.

At the end of the day though, Bay films sell at the box office and when it comes to films made to be seen on the big screen, Ambulance is near the top of the list. For this guy, it simply ran out of gas far before the ambulance came to a stop.

Ambulance is streaming now on the following services:
Powered by JustWatch