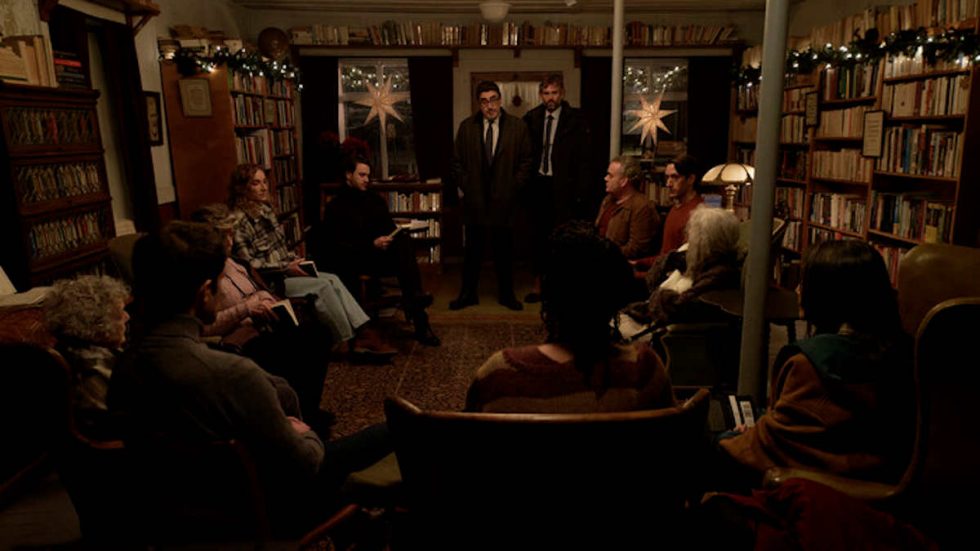 Chief Inspector Gamache (Alfred Molina) of the Sûreté du Québec is punished for being a decent cop. As penance for doing the right thing, he’s sent to the village of Three Pines, well outside a very busy and very angry Montreal. Three Pines is an idyllic town, perfect for antiquing summer people, and even better as a year-round refuge for townies looking to leave it all behind and get lost among the trees, permanently if possible. Gamache brings along Sergeants Jean-Guy Beauvoir (Rossif Sutherland) and Isabelle Lacoste (Elle-Máijá Tailfeathers), and is saddled with rookie Agent Yvette Nichol (Sarah Booth), whose infectious enthusiasm for the job creates its own set of problems. They’re initially brought in to investigate the electrocution murder of a socialite no one particularly cared for except her lover, in the town whose gossip she threatened to expose with her book. Over the course of the eight-episode run, Gamache manages to solve four murder mysteries, including the one that brings the problems of local Indigenous members into the national spotlight. Blue Two-Rivers (Anna Lambe) disappeared without a trace, and while law enforcement would like to write it off as yet another runaway, the fact that she’s Indigenous means no one will entertain the possibility that she isn’t.

If you’re a fan of Louise Penny’s detective series, now numbering 18 novels, episodes one and two adapt their storyline from “A Fatal Grace”, episodes three and four are from “The Cruelest Month,” Five and six find inspiration in “The Murder Stone”, and the final two episodes are drawn from “The Hangman.” While each two-parter is self-contained, the overall series feels like a solid travelogue to Three Pines and a primer to cloistered small-town life, where everyone has a deadly secret and some are prepared to kill to keep it hidden.

Alfred Molina brings a thoughtful peace to Chief Inspector Gamache. He is a quiet clever man, not prone to outbursts, and his even manner puts folks at ease, even if they don’t like the police. Using his intuition and strangely disconnected dreams, both while waking and sleeping, and good old-fashioned police work, Gamache comes to feel at home in Three Pines. His anchor is his wife, Reine Marie (Marie-France Lambert), and together they share that mythical connection of long-term relationships that bring comfort and stillness in a hectic modern world.

The cast of eccentric villagers include owners of the only bistro, Gabri (Pierre Simpson) and Olivier (Frédéric-Antoine Guimond), local artists Peter (Julian Bailey) and Clara (Anna Tierney), owner of Livres, Neufs et Usagés, Myrna (Tamara Brown) who also runs the book club, retired poet Ruth (Clare Coulter) and her duck, Rosa, and Bea (Tantoo Cardinal), owner of the Be Calm Centre which has shifted in purpose from the novels from a yoga studio to a progressive art gallery with ever-changing exhibitions of Indigenous art and themes.

Three Pines is an engaging mystery series managing to balance the light atmosphere of a cozy mystery with a little toned-down modern crime thriller. As this is a series based in Quebec, the dialogue will switch seamlessly from French to English with appropriate subtitles. It’s lyrical in the presentation and so natural you may not need the subtitles to understand. There are no graphic scenes of death, and with the exceptions of an electrocution pondside at a curling match and the suicide from a fall in Episode Two, most fatal exits happen off-screen. This isn’t a series for folks looking for gunfights or high-speed chases or gritty big-city drama. Especially compelling were the storylines of both missing Indigenous women and residential schools, woven into the fabric of the town and the genetics of its inhabitants.

Eight episodes seem to be all we’ll get from Three Pines, but with 18 novels to mine, here’s hoping we get a few more seasons of cozy thrills.

Three Pines (2022) is rated by Prime Video at 16+ for young adults, for mild sexy-times, swears, murders, bird strikes, boozy revelations, a suicide, a suffocation, a hanging, an electrocution, a falling statue, and a few fistfights.