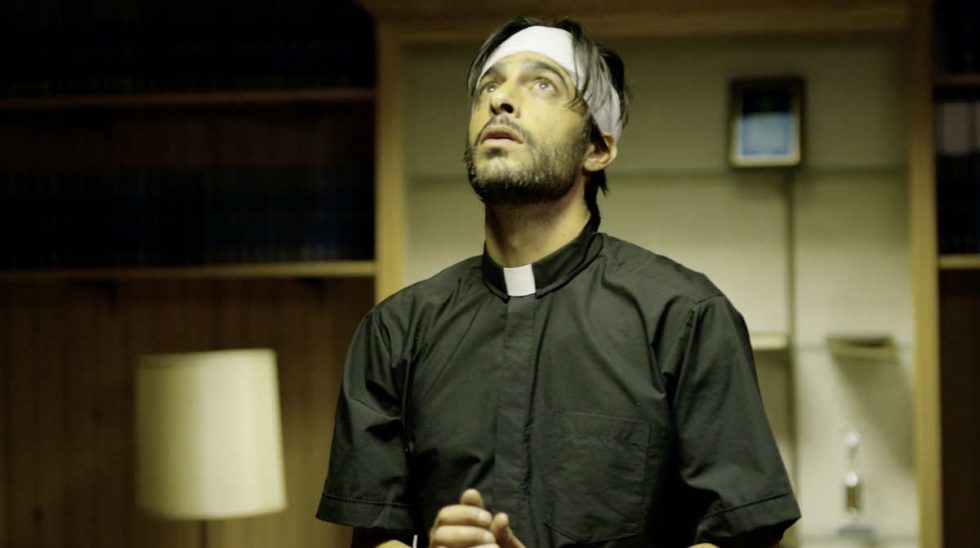 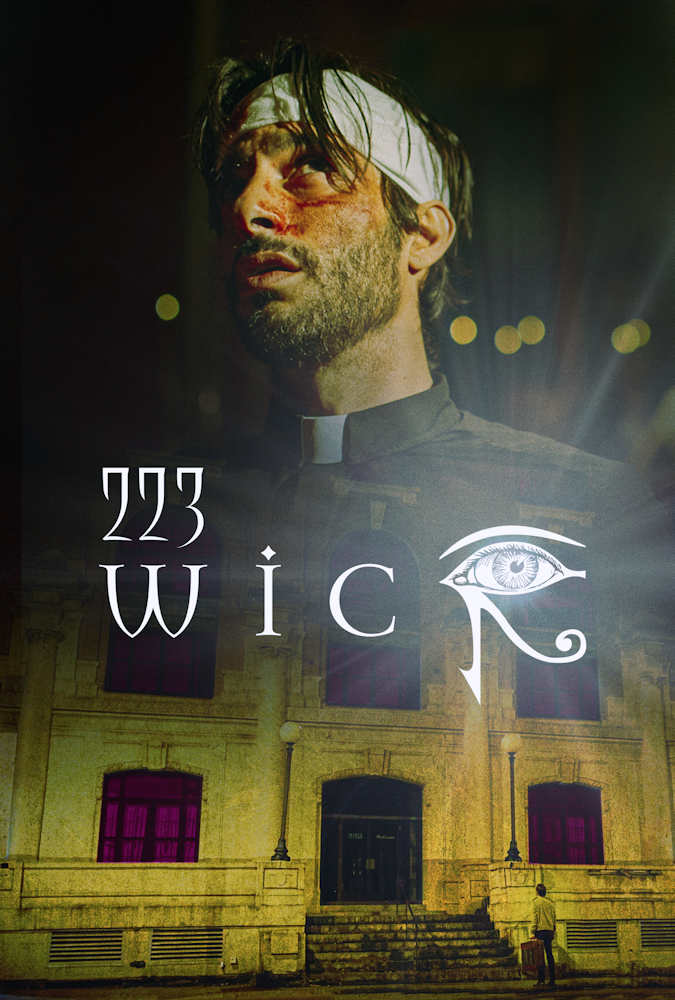 A troublesome priest with disturbing dreams finds himself at the heart of a prophecy in 223 Wick (2022).

Father John (Alexi Stavrou) is a seminary teacher prone to disturbing dreams that he is convinced foretell terrifying things to come. He claims to be compiling a book to showcase his evidence and research, but he’s sleeping late, lacks a hygiene regimen, and has frequent outbursts that rattle the only other two priests we see in this movie, Father Murphy (Zeljko Dimic) and hippie Jesus priest Father McAndrew (Eric Vaughn). Father John is supposedly sent away to be another seminary’s problem. Father Murphy, dealing with a case of the Green-eyed Gracies, also sees Father John as a threat to his power and upward mobility.

Instead of arriving at that other seminary for what would only be intensive reeducation, Father John directs himself to 223 Wick, a large Masonic building he’s seen in his dreams. I don’t think the movie comes out and says it’s a Masonic Temple, but I have been in more than a few and the architecture is distinctive. There he meets Paul (Greg Pierot), the world’s worst handyman, and the building’s owner, Kat (Dawn Lafferty), who can’t shut up about the secret society her late father was once a part of right in that very building. Between the voices Father John hears and the voice of Kat’s pet Egyptian God, Horus (I know, just go with it) it becomes a battle for souls and succession. Did Father John follow his dreams to an apocalypse or was he sent there to do something else?

I couldn’t spoil this movie if I wanted to because I have no idea. There’s a ritual to be finished but what it is or who it is for I couldn’t tell you, even under threat of torture. When Father John isn’t having a crippling migraine, Kat is arguing with Horus or stalking around the basement eating chunks from her captive sister, the Oracle (Alexandra Simone Calvin). The Oracle even has a third eye, but apparently couldn’t foretell the end of the movie since it’s missing.

223 Wick is barely feature length at 74 minutes but when the scenery wasn’t being chewed to paste, the strobing lights and animated eye remind you that there may have been an incredible short film concept, but the final product is 45 minutes too long. Red lights, empty cavernous rooms, and god-vision as seen through Saran Wrap and green fairy lights do not make compelling set designs without a plot to use them in. The characters don’t have a purpose and the story is too disconnected to make sense.

The advance notes say 223 Wick is “a throw-back to classic thriller films and inspired by the likes of Hitchcock and Kubrick” but I don’t think the people who wrote those notes saw the movie. Neither director comes to mind while watching, but either would make a fine palette cleanser. An hour of “Hitchcock Presents”, found on better streaming services, would be your best bet if you’re looking for something to watch. This is only going to make you confused and angry that you’re missing 74 minutes you could have been doomscrolling TikTok.

223 Wick (2022) is unrated but call it PG-13 for swears, Father John in his underwear – a lot, sisterly cannibalism, people getting stabbed, people getting hit over the head, and people consumed by bugs (or rats, no one ever said).

223 Wick is streaming now on the following services:
Powered by JustWatch