When Jurassic Park debuted in the early 1990’s, it caused dino-fever throughout the world. Each film debuted with CGI stronger than the last and bringing new life to each and every on-screen dinosaur. To those that have never spent time watching any of the films, the Jurassic Park movies are simply films about dinosaurs, but to those that have invested time into the two trilogies, it is more of a story about how man’s greed and desire to play God can lead to no good. With the last of the films Jurassic World: Dominion released, we’re sharing with you the films you must watch — and those that you’d be better off spending time trying to clone a dinosaur yourself. 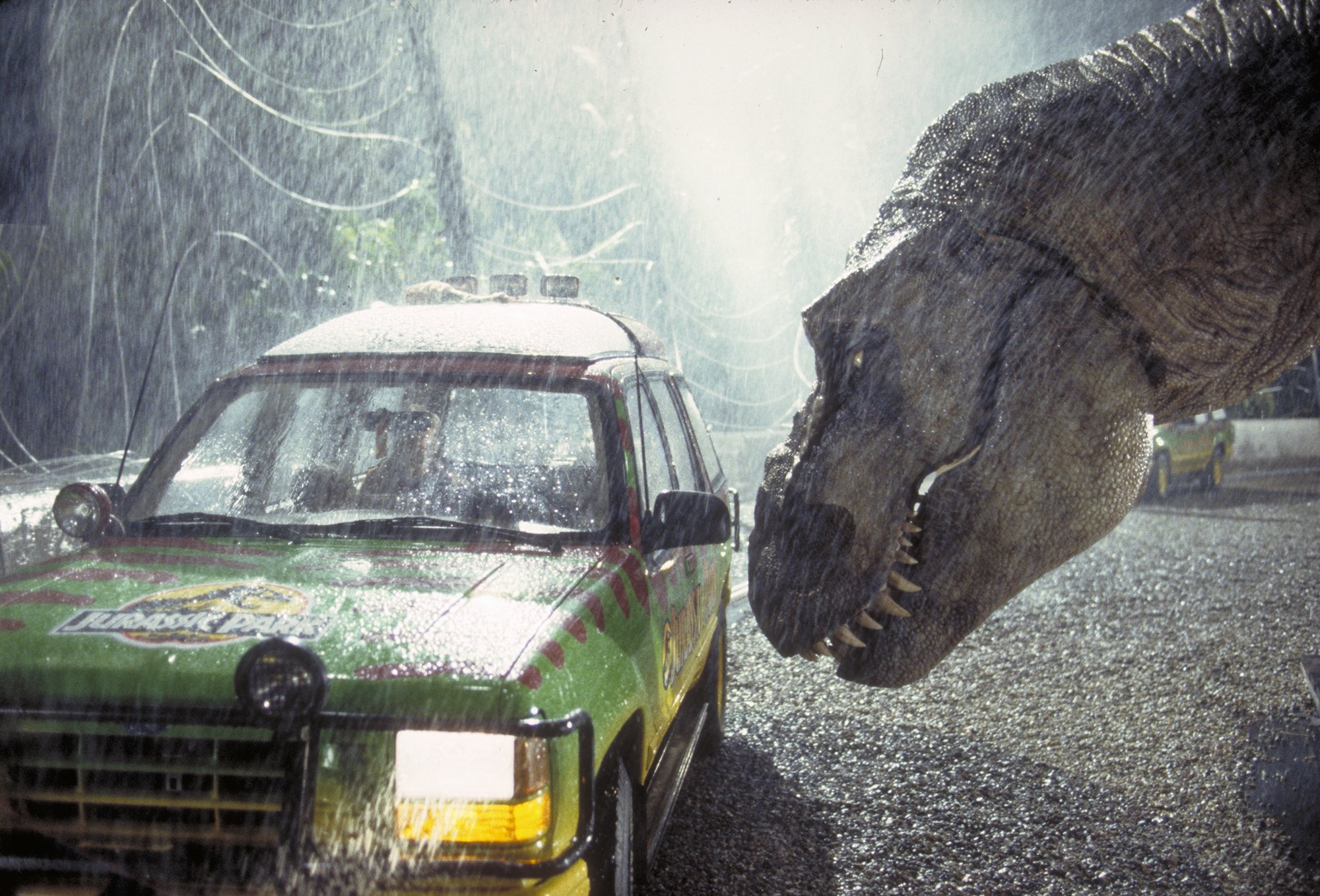 The first film in the franchise changed the face of movies. Under the direction of legendary director Steven Spielberg, it introduced never seen before CGI effects and jump scares that frightened even the most courageous of viewers. Jurassic Park would go on that year to become the highest grossing film worldwide of all-time and started a rinse and repeat series that always included a child in danger, one or two of its lead stars from the respective trilogy serving as the hero, humans messing s--t up, and, of course, dinosaurs.

The best of the six films, Jurassic Park scores a strong 4.5/5 stars.. 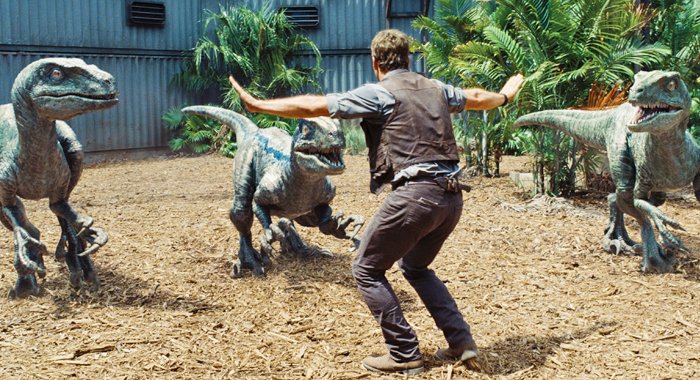 14 years after the final film in the original Jurassic Park trilogy, Universal re-introduced dinosaurs to a new generation with Jurassic World.

Hammond's dream of a dinosaur theme park on Isla Nublar is finally realized with the opening of Jurassic World. A much more advanced and supposedly safer theme park, Jurassic World is designed to bring people up close and personal to dinosaurs of all shapes and sizes with Sea World-like attractions and fun sphere-like tour vehicles to ride alongside the prehistoric animals. Like Disney always attempting to top its last-released ride, the first film of the new trilogy became the first of the franchise to introduce a new dinosaur species created in a lab, the Indominus rex, as a way to bring new guests to the island. Shockingly, this turns out to be a bad idea.

The new start to the franchise feels like a close cousin to the first and like Jurassic Park, this film went on to smash box office records with over $500 million worldwide its opening weekend before finishing with nearly $1.7 billion.

First is not the worst again with this reboot grabbing 4 stars. 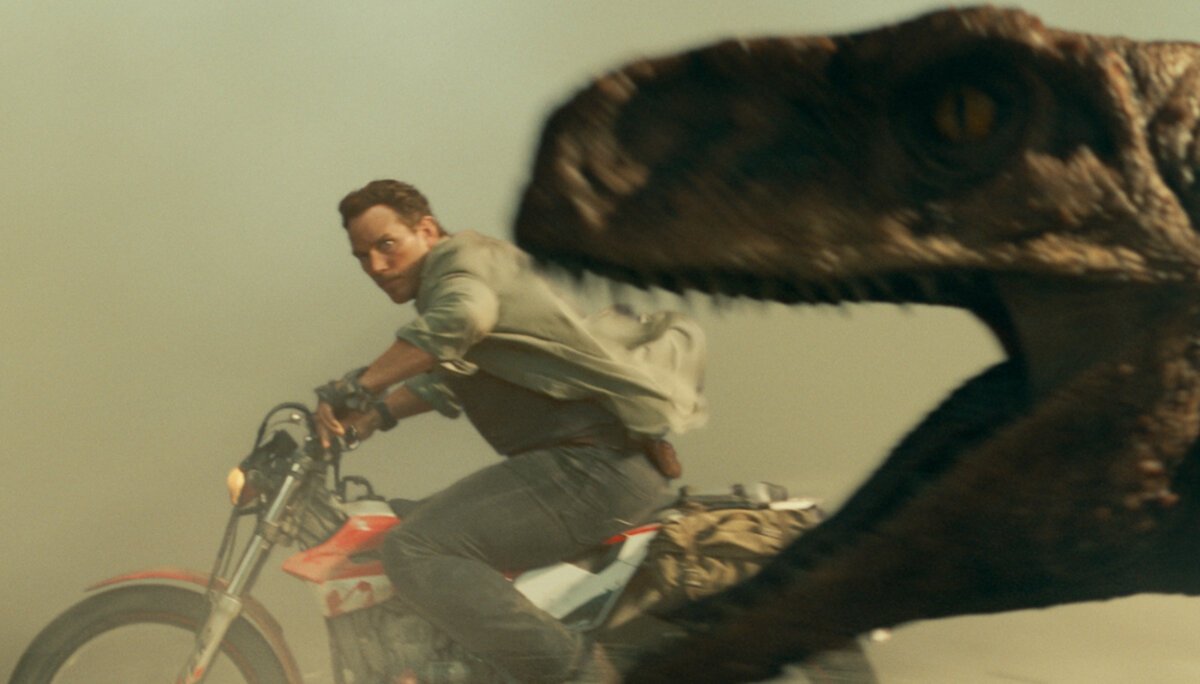 The franchise begins to fall off after the first of each trilogy and the newest entry Jurassic World: Dominion takes third spot in our list solely because of its nostalgic factor.

With more (plot) holes than a Tyrannosaurus Rex could rip into you, the last(?) film of the franchise brings together the casts of both trilogies to send it off in style. Well, in style if you consider locusts a bigger star than dinosaurs and wanting to see half the characters try to save the food chain while the other half rescue yet another child in peril. Jurassic World: Fallen Kingdom set up an amazing plot line for this new film with man and dinosaur living together and they squandered it by focusing on evil biotech firm Biosyn, run by eccentric billionaire Lewis Dodgson (Campbell Scott doing his best Elon Musk), attempting to alter DNA once again for corporate gain and profits. Jurassic World: Fallen Kingdom feels better suited as an installment of the Fast and the Furious films than the Jurassic Park series with too much action away from dinosaurs. Heck, it almost leaves one expecting the only place to go from here is taking dinosaurs to space.

As for the ridiculous plot, after Claire and Owen's "daughter" Maisie (Isabella Sermon) goes missing it leads them to Biosyn where Ian Malcolm, Alan Grant, and Ellie Sattler are also attempting to infiltrate the corporation to expose their role in potentially destroying the food chain so that humankind must rely on Biosyn for a solution. Mayhem ensues and well, if you've seen any of these films, you've essentially seen them all. Except the others had more dinosaurs.

Jurassic World: Fallen Kingdom gets an extra point for bringing beloved characters from two trilogies together and potentially finding the next British breakout star in Isabella Sermon yet it still only manages 3 stars. 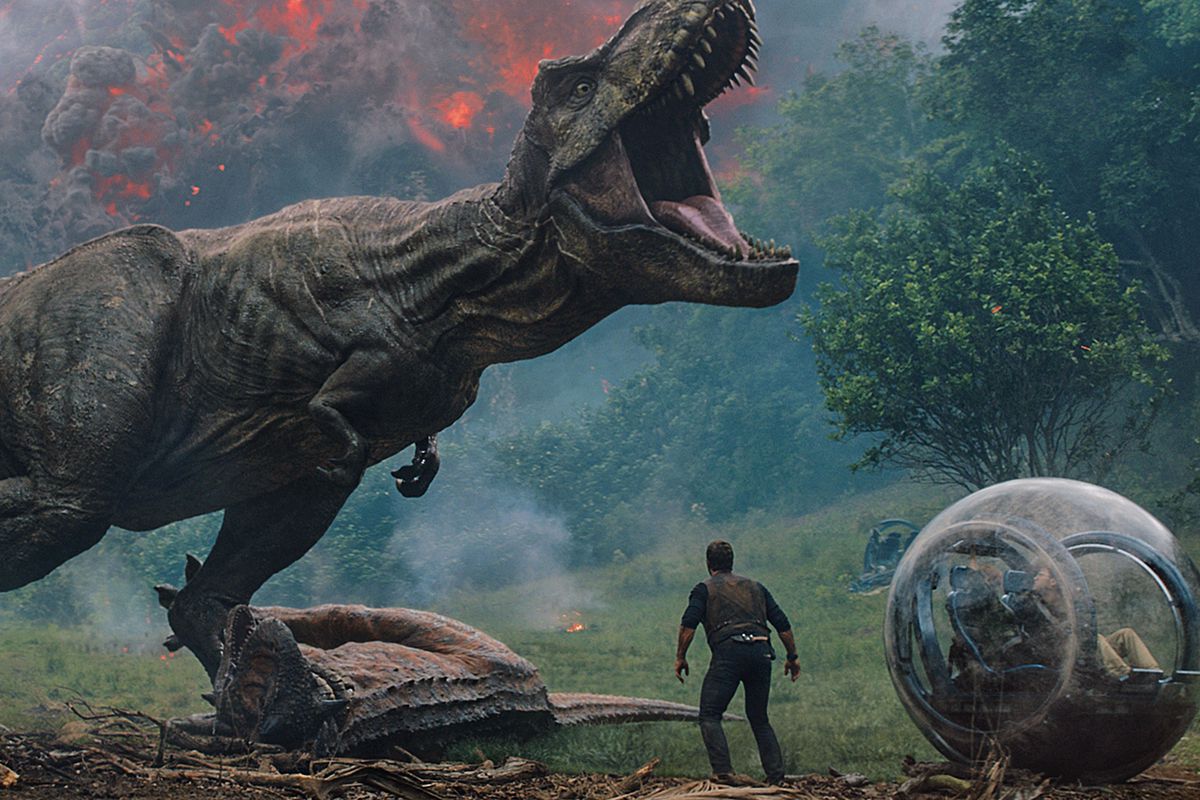 Dinosaurs are facing extinction once again with the impending eruption of a volcano on Isla Nublar and only Claire (Bryce Howard) and Owen (Chris Pratt) can save the dinosaurs (yawn). If only it weren't for Eli Mills, the aide to Hammond's former business partner, Sir Benjamin Lockwood, sidestepping the mission with his devious plan to sell the rescued dinosaurs for financial gain. As every film in the series requires a kid that needs rescuing, here it's Lockwood's granddaughter Maisie (Isabella Sermon) who figures out Mills' plan.

Like its predecessor, Jurassic World: Fallen Kingdom earned over $1 billion at the box office, but with its weak plot sees gross revenue erode nearly 60%.

Jurassic World: Fallen Kingdom earns an extra half-point for its final scenes that set up what could be (but ultimately is not) an amazing last film and lands with 2.5 stars. 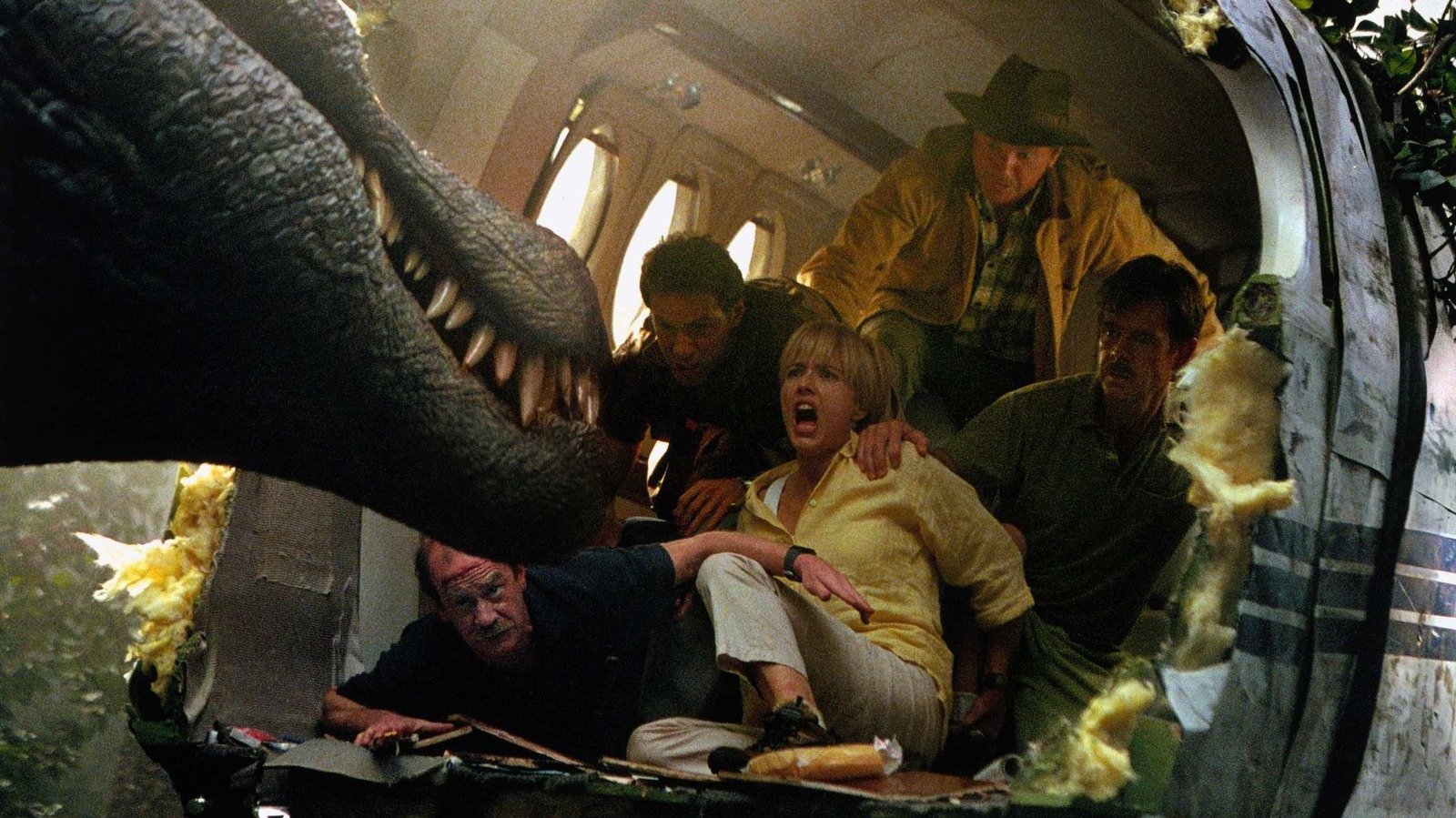 After venturing off to a second island in the previous film, the third installment returns to Isla Nublar where Alan Grant (Sam Neill) is tricked by Paul and Amanda Kirby (William H. Macy and Tea Leoni) into returning to the island to give a tour of the famous island in exchange for funding Grant's expeditions. It turns out that the Kirby's are actually looking for their son who landed on the island after a parasailing accident and when their plane crashes, all are left to survive on their own on the island before they be rescued.

Continuing a downward trend at the box office with this mediocre-at-best finale to the initial trilogy, Jurassic Park III ultimately shelved the franchise for over a decade due to its continued weak storylines and poor performance in theaters. 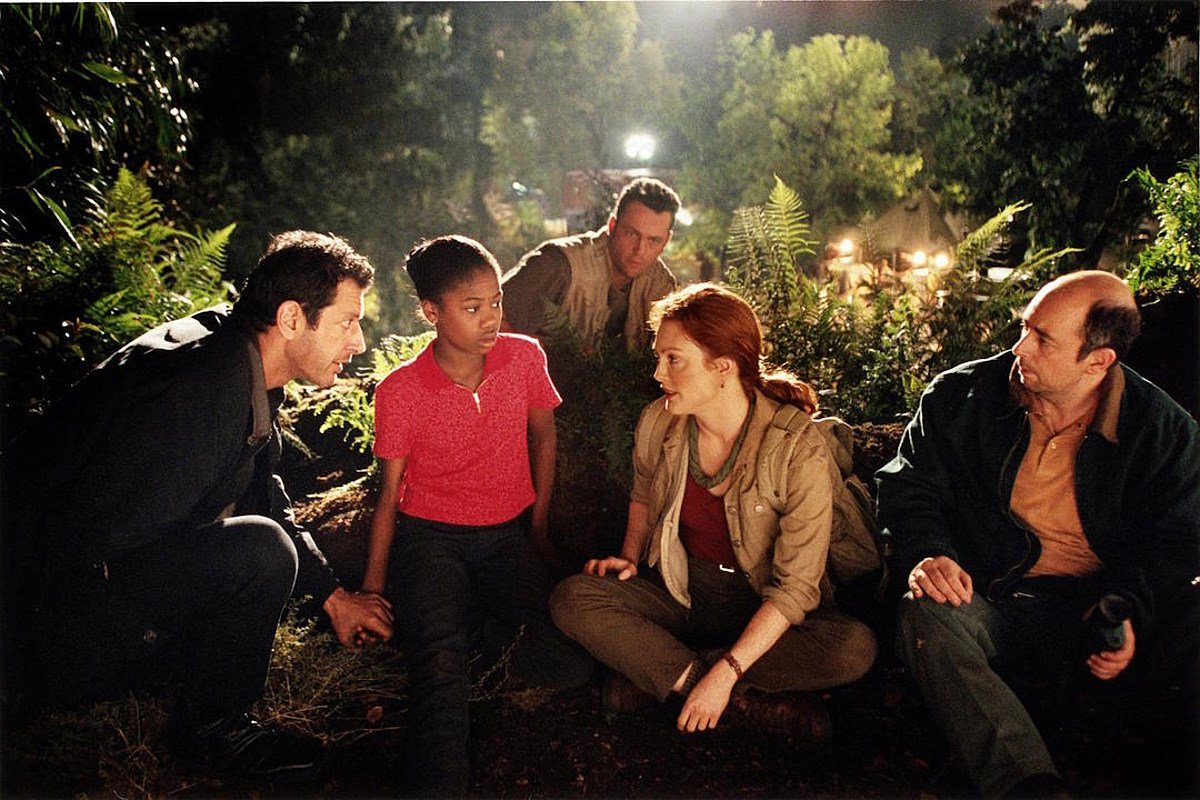 Remember when Vince Vaughn was in The Lost World: Jurassic Park? No? Well you’re not alone. Vaughn himself would probably like to forget this poor sequel to the original film and definitely Steven Spielberg's worst film ever.

The action takes place on a new island, Isla Sorna, where dinosaurs run free as a result of cloning that took place before Jurassic Park — a breeding ground for the prehistoric beasts before they were transported to the doomed theme park. John Hammond's company InGen is on the brink of bankruptcy because of what took place on Isla Nublar and he faces an internal coup by his nephew, Peter Ludlow, who wants to exploit the dinosaurs stateside at a theme park in San Diego.

Under false pretenses, paleontologist Dr. Sarah Harding (an out-of-place Julianne Moore), photographer and videographer Nick Van Owen (Vince Vaughn), and a few other forgetful characters visit the island to document the prehistoric beasts in their element. They're joined by a reluctant Ian Malcom and his stowaway daughter and the group is forced to survive Ludlow's team who are working to take the dinosaurs to California and the dinosaurs who are acting like...dinosaurs.

Truly a terrible movie, The Lost World: Jurassic Park still managed to wrangle up $618 million but a far cry from the first and many of the future films.

The Lost World: Jurassic Park gets a major bite taken out of it finishing our list with just 2 stars.