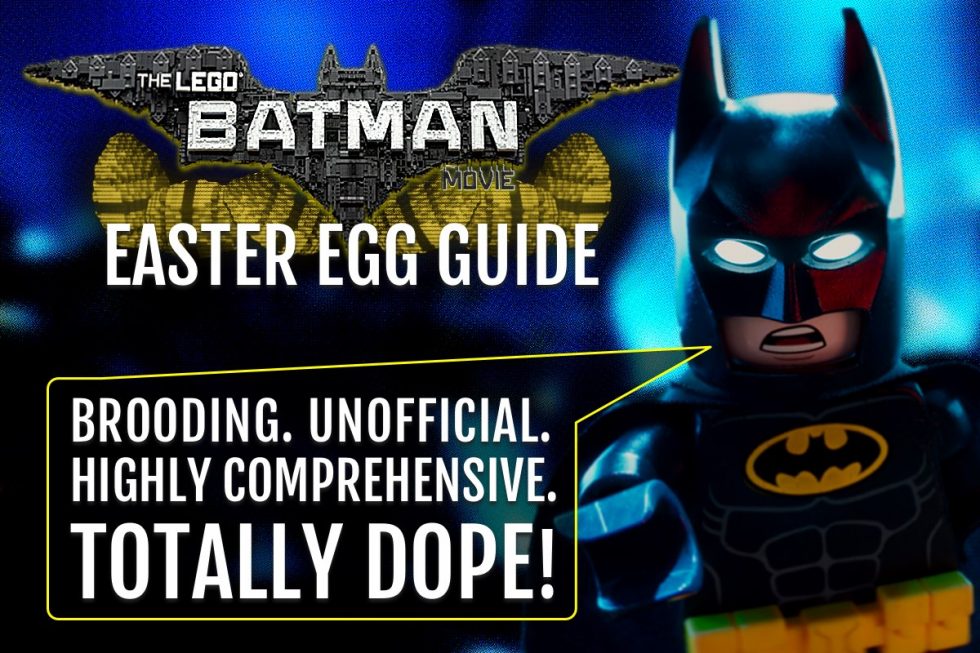 Film Obsession’s Unofficial LEGO Batman Movie Easter Eggs Guide has arrived just in time for the film’s release this February 10th, 2017. The Easter Eggs proved dark, brooding and laborious to unmask, due in part because The LEGO Batman Movie is the funniest film of the year (so far). While the comedy mayhem is distracting and scenes flash quickly (stay tuned for the DVD version of this article), I managed to hunt down a few nods to the iconic toy brand and comic, as well as some interesting facts about the film and multiple instances of “poking fun” at every Batman movie from Keaton to Snyder’s train wreck.

As it turns out, the Batcave houses more than just high-tech gadgets and Bat-vehicles, it's also home to an impressive collection of LEGO Batman Movie Easter Eggs! Inside the Batcave we find reclaimed treasures from countless Bat adventures, like an over-sized penny and (above) animatronic T-Rex recovered from Dinosaur Island amusement park. The caped crusader battled this beast in Batman #35 (1946) and it was on display in the Batcave trophy area in Forever Evil #4 (2014). Dinosaur Island also appeared in Star-Spangled War Stories #90 (1960) as part of an ongoing War That Time Forgot series.

Chris McKay served as editor and animation director on the commercially successful The LEGO Movie in 2014. Based on its success, Warner Bros. would announce an entire slate of movies dubbed the LEGO Cinematic Universe and tapped McKay to direct The LEGO Batman Movie. It was a superb choice considering McKay's obsession with the Caped Crusader, and evidenced by the tattoo of Cat Woman on his forearm. Get ready for seriously esoteric nods to Bat-culture thanks to this dude. McKay also voices the pilot carrying way too many explosives over the world's most crime-ridden city in a plane chartered by MacGuffin Airlines. Google it.

In Batman Returns, Danny DeVito's Penguin remotely seizes the Batmobile, with an unsuspecting Batman at the helm. Powerless and incapable of escape, the Dark Knight struggles to regain control as the runaway vehicle barrels through crowded streets of terrified onlookers. The Caped Crusader eventually finds the offending hijack device and narrowly prevents the Batmobile from running over a "helpless old lady at 12 o'clock high." As for the LEGO version, Arnett's Batman is driving recklessly and similarly by a hair's breadth, prevents this same disaster.

33. So Many Sick Rides Image

Back in 1989, Billy Dee Williams played the part of Gotham D.A. Harvey Dent in Tim Burton's seminal Batman movie. But when Joel Schumacher took over with Batman Forever, Tommy Lee Jones replaced Williams to embody the hideously disfigured Two-Face, Dent's persona upon suffering an acid chemical burn to half his face and body. It seems Chris McKay set out to right that injustice by hiring Billy Dee Williams and his silky voice to fulfill the role he was promised 28 years ago. Funny enough, his character design is a mash-up of Tommy Lee Jones' and Aaron Eckhart's designs from their respective movies.

Word of advise: keep an eye out for LEGO Batman Movie Easter Eggs via numerous advertising billboards littered throughout Gotham City. You'll find Ferris airplanes at LEGO Gotham Airport and referenced in several billboards. This is a two-for-one easter egg. First, Ferris Air is a recurring entity in the DC Universe but most closely associated with Hal Jordan/Green Lantern. The aviation company is even featured in that crappy Green Lantern movie starring Ryan Reynolds. The second part of this easter egg is the advert itself which is similar to the famous quote from Adventures of Superman (1952-58), "It’s a bird. It’s a plane! No. It’s Superman!"

While not proven, this next observation is suspect and worthy of mentioning in our LEGO Batman Movie Easter Eggs Guide. Will Arnett (the voice of Bats) is no stranger to wearing robes in his previous television roles. He's been the center of attention with the "shorty" robe on 30 Rock, and he also wore various silk robes throughout his tenure on Arrested Development. You might also remember that Michael Cera (Robin) and Will Arnett starred together on the hit series. Cera makes a reference to his George Michael Bluth character when Robin sings Wham!'s "Wake me up before you go go," which was written by the late George Michael.

During a chase through downtown LEGO Gotham City, the Batmobile races past a public transit vehicle with the label "Bludhound Bus" along its side. This is a play on Bloodhound Bus Lines and either points to the Bludhaven Bloodhounds Baseball Team or more likely to an obscure DC comics villain named Bludhound. He's an intergalactic criminal with a bounty that puts him in Lobo's crosshairs. Batman and Lobo have a complicated history, namely, the Joker once offered Lobo $10 million dollars to kill the Dark Knight, and as a result, Lobo killed all of Batman's friends including Robin and Nightwing. Just a reminder here, you had better look fast if you want to spot these LEGO Batman Movie Easter Eggs.

In the same scene as the Ferris Air billboard there is also an advertisement for Plastique Perfume. This is in reference to the DC villain Plastique. Once a member of the Suicide Squad, Plastique temporarily quit her evil ways and wed Captain Atom of the Justice League. She is presently kicking around the New 52 as an assassin with a penchant for explosives.

27. So many DC Villains Image