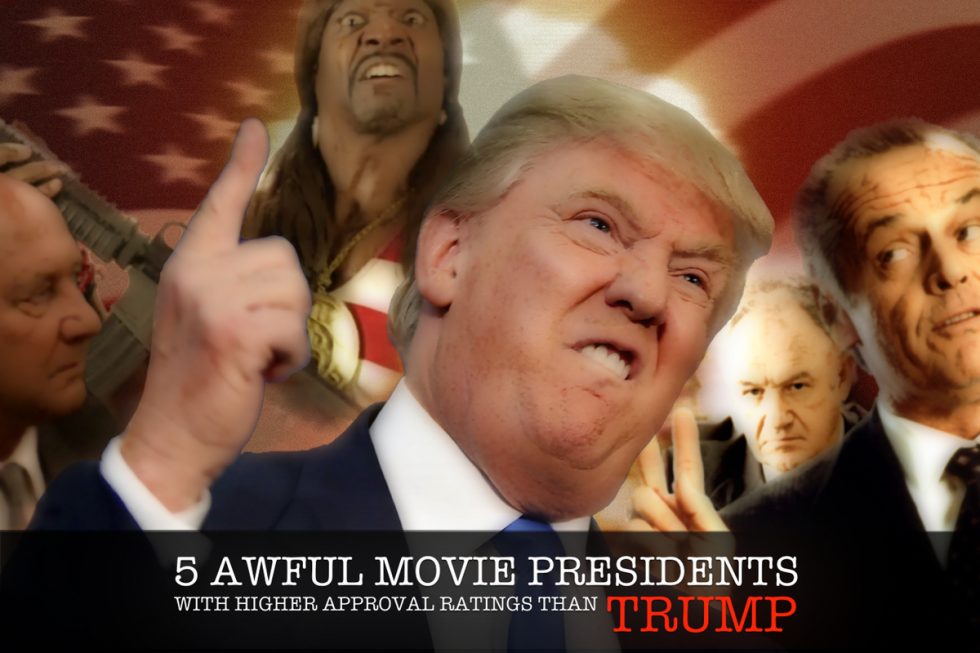 On January 20th 2017, Donald Trump became the 45th President of the United States. 125 days later and the Republican president has already broken records, most notably, he has the lowest approval rating of any American president in recorded history. 39% of polled voters approve of his job leading The United States of America.

Cinema has given us our fair share of awful presidents, but very few score lower than Trump. How is that even possible you might ask. Well, with a little imagination and a yuge heaping of sass, we’ve compared the president’s deplorable approval rating with that of the RottenTomato.com tomato meter. The 5 fictional presidents listed below were incompetent and disgraceful, however, film critics have collectively rated their movies higher than that of Donald Trump. We’ve also included 2 movie presidents on the other side of Trump’s approval score.

But let’s all breathe a sigh of relief that President Trump is still more popular than Cobra Commander’s Manchurian candidate in G.I. Joe: Retaliation. Relax folks. This is all in good fun.

The President
Escape from New York (1981)

The President
Escape from New York (1981)

Admittedly, Escape from New York is one of my all-time favorite movies. Plisskin is my gaming tag. Part of what made that film so great – apart from Carpenter's vision of a dystopian America in response to the Watergate scandal – is the smarmy President played by Donald Pleasence. Kurt Russell's Snake Plissken, against his own will, is tasked with rescuing the president after Air Force One crash lands in Manhattan. The island itself has been turned into the country's largest maximum security prison, where violence and debauchery reign. Plissken, himself a convicted criminal, is given a presidential pardon for successfully carrying out the mission, but when Snake confronts the president about the people who died in his name, the president offers zero remorse.

Mike Judge, of Beavis and Butthead and HBO's Silicon Valley fame, produced the theatrical failure Idiocracy. Thankfully, cult cinema and movie critics at-large have universally favored the satirical science fiction comedy film. It centers around Joe Bauers (Luke Wilson) who wakes from a suspended animation experiment 500 years into the future. He finds that society has succumbed to stupidity. The president, played here by Terry Crews, is profoundly incompetent but directs Joe to solve the world's food crisis and failed economy. Joe conforms to the request only to be sentenced to death by monster trucks for further collapsing the economy before the crops have returned.

The Purge franchise's premise – of allowing Americans one night per year to legally commit any crime – had always seemed warped and far-fetched. That was until candidate Donald Trump bragged at a campaign rally that he "could stand in the middle of 5th Avenue and shoot somebody and I wouldn't lose voters." As for Election Year, the series recognized the absurd political climate. The film pits two vastly different candidates in pursuit of the presidency, and ultimately, control of the fate of the annual purge. One of those candidates belongs to The New Founding Fathers of America (NFFA), who feels threatened by presidential hopeful Senator Roan (Elizabeth Mitchell), so he revokes a rule that excludes government officials from the purge. Roan finds herself a target, and with the help of her bodyguard Leo Barnes (Frank Grillo), must turn the tables on the NFFA.

This science-fiction parody about martians invading Earth is my least favorite Tim Burton moment. The action is dull and the comedy is forced. If not for the persistent head transplants or Jack Nicholson being great in his role as President Dale, I'm not sure there's reason to celebrate this commercial failure. Independence Day came out in the same year and while similar, gave us future summer movie king, Will Smith. As for President Dale, he stands in stark contrast to ID4's President Whitmore. Dale carelessly engaged with the invading army, not once, but twice, resulting in multiple massacres of human life.

Gene Hackman's President Richmond was a sexual predator and had a tendency to believe he was above the law. He attempted to cover-up a murder using the power of his office, but in the end, Richmond got exactly what he deserved for playing with fire in the adaptation of David Balducci's novel.

Luckily (knock on wood), Trump hasn't managed to dip lower than the bozos below. If he does, we are certainly doomed.

In this parody of horror films, Leslie Nielsen plays President Baxter Harris. He is a racist, senile, deplorable man.

Charlie Sheen's President Rathcock is the worst president on this list. Oh, and FYI...his merits include having built a wall to keep the immigrants out. Chew on that for a minute.